A Forest Farm Will Grow In Battery Park This Summer

The charming Zelda-shaped (RIP!) organic vegetable garden in Battery Park has been temporarily shuttled out of the way for the Battery Bikeway construction. But the Battery Conservancy, the caretakers of the 25-acre waterfront park at the tip of Manhattan, have announced plans for another new farm to take up a permanent residency downtown. And this one will grow ramps!

The park will debut the city's only Forest Farm, a 20,000-square-foot space in a shaded section of the park with over 50 different types of plants and a focus on local species that are also edible. "There are native, shade-loving plant gardens in the city, but what makes this unique is a heavy focus on edible plants and the layout itself for the space has a lot of winding paths," explains The Battery Conservancy's Outreach Coordinator Nicole Brownstein. "All of the plants are going to be planted in clusters as opposed to designated berms like in a traditional farm. It'll look and feel much more like a natural forest ecosystem rather than a planned space." 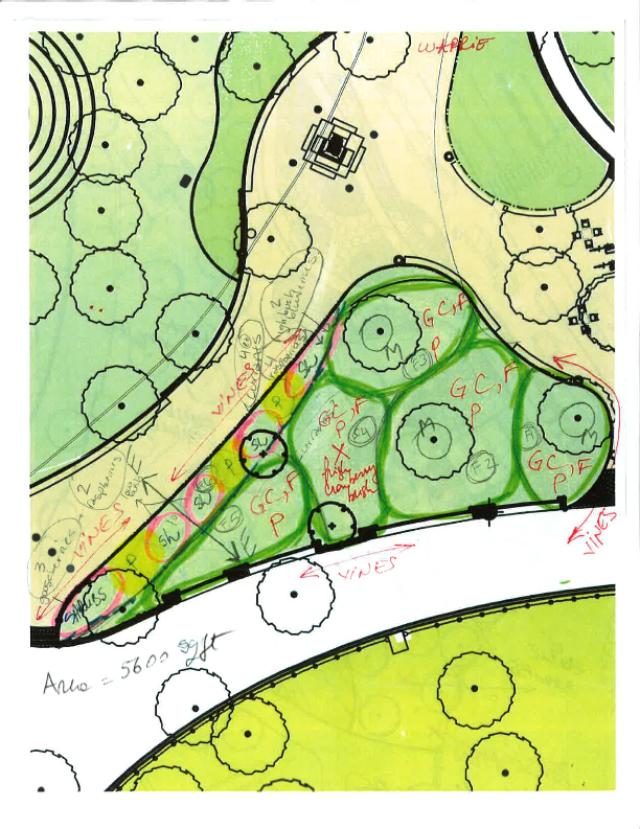 (rendering courtesy of The Battery Conservancy)

The Conservancy will begin construction on the farm—with help from students at the Millennium High School and volunteers—in late March and early April, with plants going into the soil in late April. Featured plants will include huckleberries, blueberries and elderberries; Hen of the Woods and Blue Oyster mushrooms; Concord grapes; Jerusalem artichokes; ramps; thicket beans; and more.

"We're going to be starting things like ramps from plants because they actually take 18 months to germinate, so those will be ready pretty quickly," Brownstein tells us. "Our fruit-bearing trees won't be ready but a lot of our stuff will. I think that our blueberry bushes will start to produce, a lot of the berries. A lot of the mushrooms as well."

The Forest Farm—and the relocated Battery Urban Farm—will be predominantly an educational tool for local schools, who can visit both farms through the Conservancy's Field Trips at The Battery program. But members of the public and ramps fiends can also meander through the Forest—though hands-off the plantings, please. "Whenever anyone's walking by and they see farm staff in the space when they're not teaching a class, the public is more than welcome to come in and look around—but the public can't really go in and forage."

"For our vegetable farm, we donate almost all of the produce to school cafeterias and the food truck Drive Change/Snowday and we give it to the Shore Soup Project, which is a soup home delivery program in the Rockaways. If people participate in any of those programs or go to Snowday, there's a pretty good chance you'll taste it there," Brownstein says. "We also plan on having tastings in our workshops," which will be monthly starting this summer.

#battery park
#forest farm
#ramps
#original
Do you know the scoop? Comment below or Send us a Tip