A Dining Guide To The Seafood Utopia Of City Island

A summer in New York City is incomplete without a visit to City Island, the closest thing you'll get to a New England seaside town without actually leaving the city. Never been? Grab an UberPool or borrow your cool friend's car and drive out to the former fishing village connected by bridge to the mainland of the Bronx. Parking isn't a problem—almost every restaurant has complimentary parking lots and ample street parking is easily available.

Though City Island isn't home to any public beaches—try making friends with a resident who has access to a private beach and your summer just got so much better—the Bronx's Orchard Beach is a mere eight minute drive away. 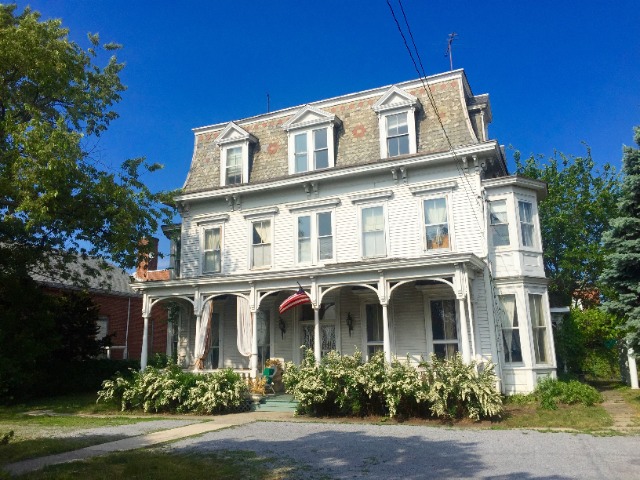 At only 1.5 miles long by half a mile wide, City Island is stuffed with scrumptious seafood. Almost every diversion here is edible, so work up an appetite visiting Victorian houses on King and Minnieford Avenues and wander the residential streets looking for a weekend garage sale. The City Island Nautical Museum is also worth a visit to learn a bit of local history and see a classroom that served as a set for Boardwalk Empire.

If you want to make a day of it, hop off the island for a round of mini golf at Turtle Cove Golf Center or visit the historic Bartlow-Pell Mansion set on sprawling gardens and gorgeous grounds from a very different kind of New York City.

But of course, you're visiting City Island to eat. Here's where to do it: 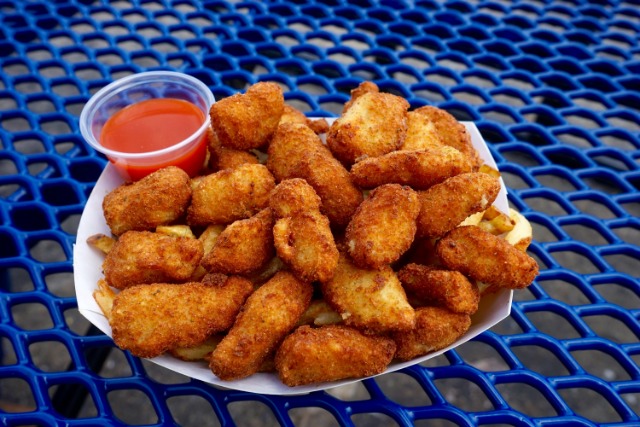 JOHNNY'S REEF Locked in a consistent, albeit peaceful territorial seafood battle with its across the pier neighbor, Tony's, Johnny's is one of two grab-and-go spots any City Island visitor must try. Locals and frequenters to this part of the island will argue which spot is better, but both have their tasty fried merits. Line up for some of the cheapest seafood in the city; a basket of succulent lobster bites goes for $16 and is served on a bed of shoestring, fast food-style fries. A $12 plate for freshly shucked clams is available at any hour of the day, because pretty much any hour is happy hour here.

Pair with a $6 frozen cocktail and head to the DIY sauce bar where you can load up on ketchup, tartar, cocktail and hot sauces. The cafeteria-style interior is fine for a quick casual meal, but opt for the sunny benches on the pier, where diners are serenaded by a chorus of hungry seagulls. 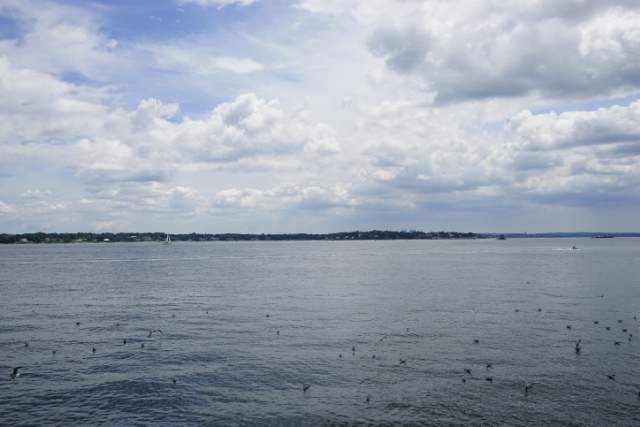 TONY'S PIER RESTAURANT 62-year-old Tony's Pier burned down in a fire during Hurricane/Superstorm Sandy, but triumphantly reopened the following October after a $2 million reboot. Slightly smaller than Johnny's and therefore slightly more manageable during peak hours, Tony's offers a similar menu and magnificent view of Long Island Sound to that of its across the street rival. Here, you'll line up for fried or broiled seafood—bring a crew and split up for the best of both worlds—or opt for combos mixing broiled lobster tail and fried shrimp ($26-28).

Fries here are thicker, steakhouse-style, and combos come with a green salad to ease the guilt of popping endless rings of deep fried calamari into your mouth. For kids, or adults who think they're kids, a row of arcade games will keep curious minds entertained, the highlight of which is a catch-a-lobster game (think stuffed animal claw, but with a live animal), where winners get their lobster cooked on the house. 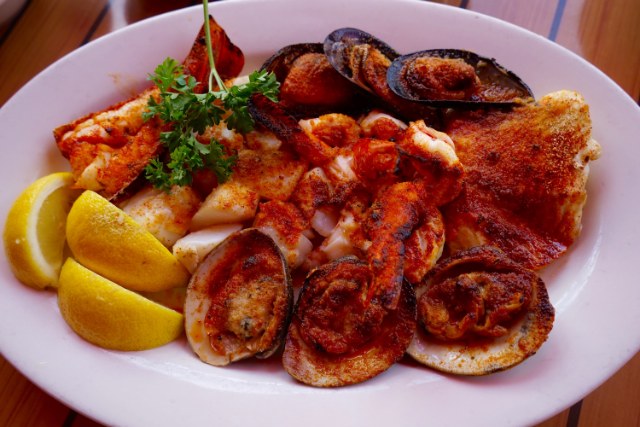 SAMMY'S SHRIMP BOX Quantity and prime sidewalk seating are two good reasons to eat at Sammy's. The restaurant also takes weekend reservations, a major perk for groups or impatient eaters. Sibling restaurant Sammy's Fishbox across the street is remarkably similar, except without those clutch roadside tables.

Upon being seated at the old school Italian seafood joint, guests are treated to a plate of antipasti, cornbread and Italian bread, and the smorgasbord merely begins there. Visit Mondays-Sundays when a lunch special runs $17.95-$29.95 (broiled seafood combo), and includes tomato juice or a slice of melon, your choice of clam chowder styles or salad, potatoes, tostones, fries or linguine on the side, coffee or tea and ice cream. Invite a friend.

On Sundays and after lunch, plenty of shared platters are still available, and those not advertised as shareable are still probably more than a single human can eat in a span of 24 hours. Enormous portions are just greasy enough to be sopped up with an extra side of garlic bread. Prepare for leftovers. 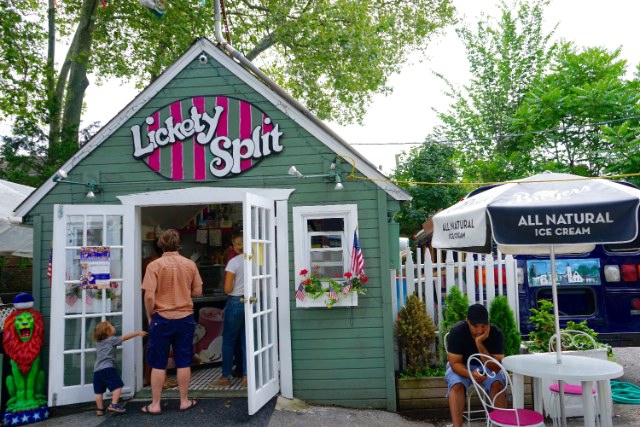 LICKETY SPLIT ICE CREAM PARLOR This quaint ice cream cottage scoops out over a dozen flavors of Breyer's—nothing snooty, just good old cold and sweet ice cream. Waffle cones, shakes, sundaes and soft serve are also on the menu, all to be enjoyed at outdoor tables in the ice cream parlor's courtyard. For a sugary seafood breather, this is the spot to indulge. 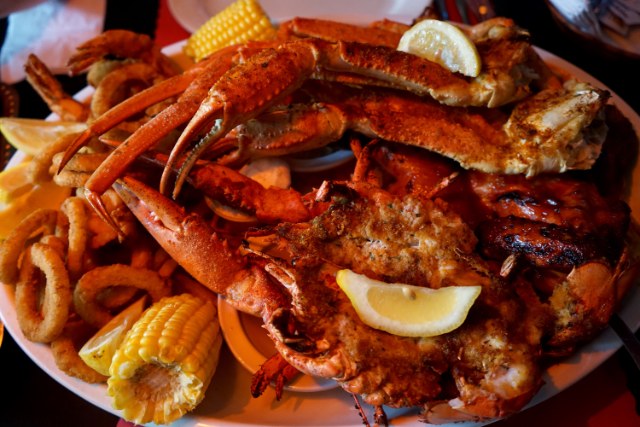 THE ORIGINAL CRAB SHANTY City Island has a population of under 5,000, but this is New York City and you'll wait in line at a great restaurant no matter how small the neighborhood. The closer you arrive to opening, the less you'll wait for a booth at this mirror-walled, sky-lit mansion of a seafood shack. Housed in a former turn-of-the-century silent movie theater converted into a mid-century post office, this family-owned restaurant has been doling out crustacean, bivalve and other gargantuan family feasts since 1977.

A vast menu, shaped appropriately like a crab, is packed with seafood dishes and combos ranging from pastas to the standard City Island broiled and fried fare, but the feasts and banquets are why you're here. The $73.99 BBQ feast, one of the restaurant's most popular, has been on the menu for nearly 40 years, and it's actually a bargain considering what a serious feast this is.

A communal meal here begins with garlic bread fresh out of the toaster, your choice of clam chowder or salad and a side of crudite. To feast, a platter larger than many a Manhattan closet is presented onto the table overflowing with lobster, shrimp and snow crab legs layered atop fries and onion rings, half a bbq chicken, baby back ribs, and rice and corn on the cob for good measure. A pool of melted butter is available for your dipping pleasure and happiness to anyone with tastebuds is imminent. After pulling off your crab-decorated plastic bib, grab a complimentary apple on the way out. 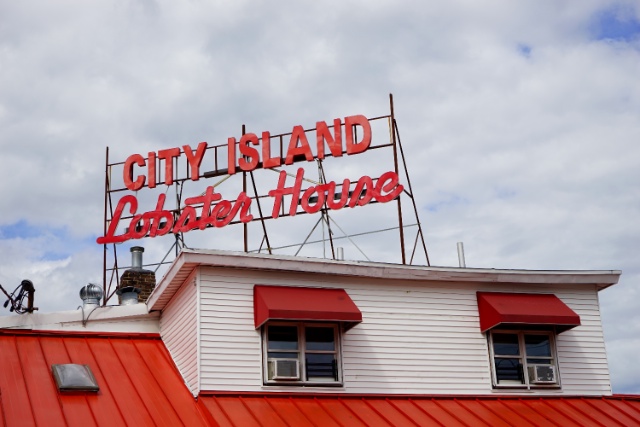 CITY ISLAND LOBSTER HOUSE A beacon of island life just off the bridge, this seaside seafood restaurant follows in the grand City Island tradition of serving massive amounts of food at prices far too low for New York City. Naturally, lobster is the way to go here, with options ranging from broiled or steamed whole lobsters, lobster rolls, lobster bisque, lobster pasta, lobster paella, a lobster tail surf and turf option and beyond. Needless to say, the quality and ambiance far surpasses that chain restaurant with lobster in the name.

To make things romantic, go for the $100 ultimate feast for two [giant] people, where piles of seafoods (i.e. aphrodisiacs) are layered on a bed of linguine to be eaten Lady and the Tramp-style. Save a small pasta pillow for the ensuing food coma.

Melissa Kravitz moved to New York City in 2009 and has been writing about food ever since. Her work can be seen on Thrillist, Mashable, Elite Daily, First We Feast and more. She eats mostly noodles and is working on a novel.