A Definitive Guide To All Of NYC's New Chicken Offerings

In case you hadn't noticed, we're experiencing a glut of new chicken preparations, from much-hyped chicken sandwiches to the humble rotisserie chicken finally getting out from beneath its behemoth fried kin. Truthfully, we'll take the noble bird anyway we can get it, which is why we're so pleased to have so many new offerings that have debuted so far this year. Below, our favorites of the pack; tip us off to other Good Bird Finds in the comments. 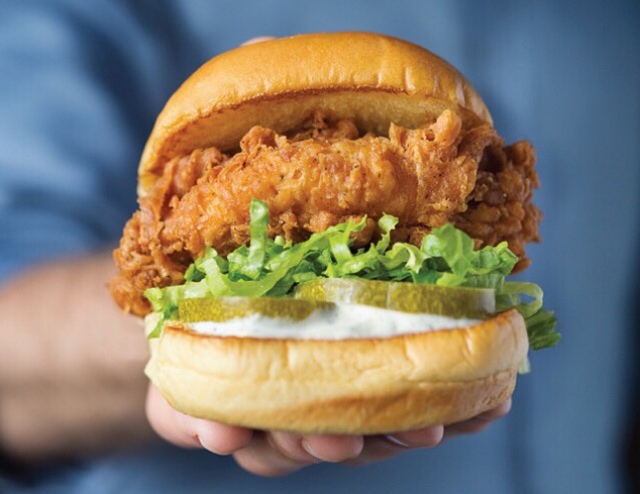 FRIED CHICKEN SANDWICHES Arguably the most trendy of the chicken iterations at the moment, with everyone from big name restaurateurs to casual comfort food spots getting in on the action.

ChickenShack from Shake Shack Was it any surprise that Danny Meyer's big name burger joint decided to explore the realm of fast food chicken? In July, the chain launched the Chicken Shack ($6.29) to great response, frying up tender chicken breasts in a peppery coating. To offset the pepper kick, an herb-filled mayo slick, crunchy iceberg lettuce and briny pickle chips. All in all, a delicious if not exactly genre-pushing entry. 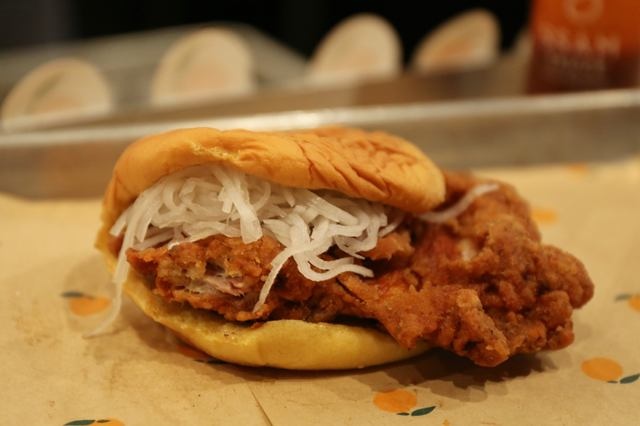 Fuku For genre-pushing, let's head over to Fuku, David Chang's standing room only new chicken spot that may one day spawn an empire. Fuku's got a super limited menu that includes fries, a rotating salad selection, a milk bar cookie and one bun-eclipsing spicy chicken sandwich ($8). Heat level may vary by day—Chang and his team are tinkerers by nature—but you can always expect an enormous portion of crunchy fried thigh meat with some kind of cold acid component on top. 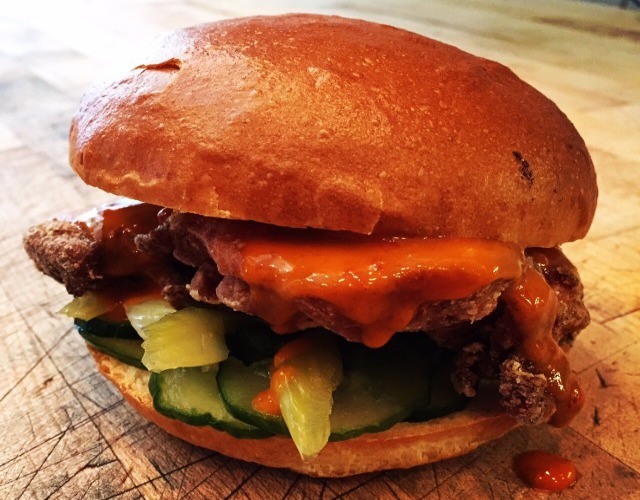 Mighty Quinn's Though the name of their game is typically barbecue, this multi-outlet NYC restaurant unleashed their spicy chicken sandwich last month, first smoking and then frying a chicken thigh for added flavor. They top the resulting creation with their chili-lime wing sauce, toss it on a brioche bun and add cucumbers and pickled celery for crunch, salt and a touch of cool.

Mighty Quinn's has a number of locations and counters in Manhattan and Brooklyn: 103 Second Ave between 6th and 7th Street in the East Village (212-677-3733), Brookfield Place/Hudson Eats at 225 Liberty Street, 2nd Floor in the Financial District and 75 Greenwich Avenue between West 11th and Bank Streets in the West Village (646-524-7889) 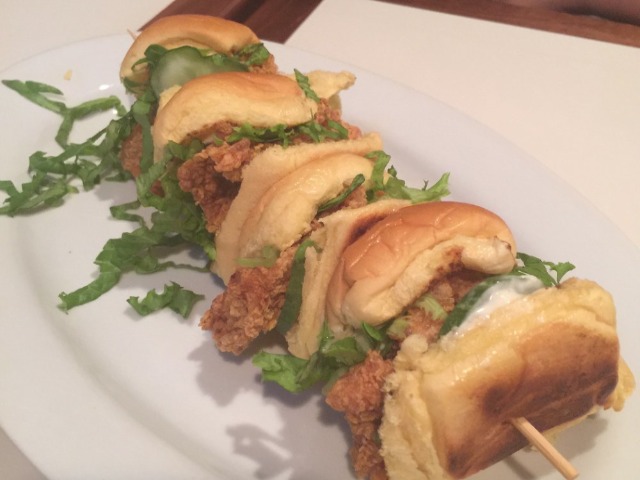 El Cortez That one of the founding members of Pies 'N Thighs would be responsible for another outrageously good chicken creation should be no surprise at all. Stephen Tanner and his business partner Chris Young went with a mostly Mexican theme at their new Bushwick tiki den, but they're also doing Chicken Buddies ($11), a stack of four fried chicken sliders skewered with a wooden rod. These are platonic ideal fried chicken sandwiches, with a hefty crunch to chicken ratio, a slick of creamy mayo and vegetable support with shredded lettuce and slices of pickle.

El Cortez is located on 17 Ingraham Street in Bushwick, Brooklyn 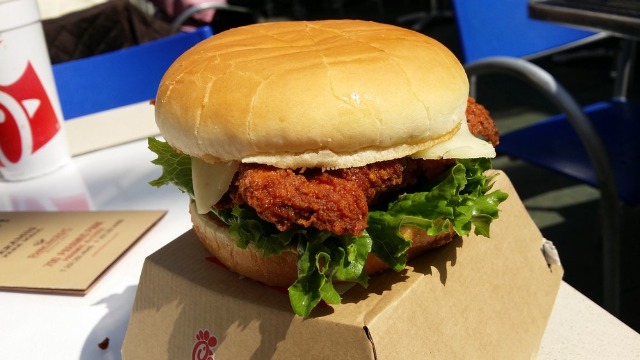 Chick-Fil-A The ownership's despicable politics won't stop this Georgia-based chain from their planned expansion into the NYC market, beginning with their flagship location opening near Herald Square next month. There will no doubt be pandemonium when they make their debut. The chain's known for their classic Chick-fil-A Chicken Sandwich, served simply on a buttered bun with dill pickle chips, but they also offer a deluxe version with cheese plus iterations on a Spicy Chicken Sandwich. 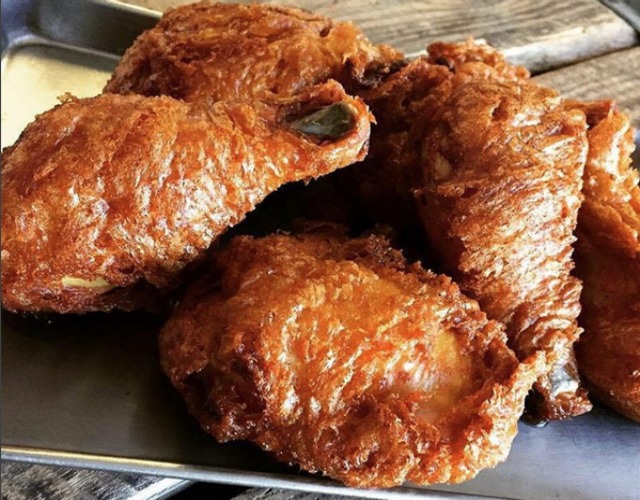 FRIED CHICKEN For some, chicken served off the bone is no chicken at all and so for them, we offer the following options.

Delaney Chicken Local BBQ entrepreneur Dan Delaney wasn't content to let his brisket empire stand alone and sometime (hopefully) in the next few weeks he'll be debuting his next culinary foray: fried chicken. Delaney will open his namesake chicken shop inside UrbanSpace's forthcoming Vanderbilt market steps from Grand Central Terminal. There, his team will be frying up batter-dipped leg-wing-thigh baskets kissed with cayenne and citrus. Rumor has it some well-timed trips to Louisiana to NOLA's famed Willie Mae's may have served as inspiration; we'll have to judge that for ourselves whenever the market opens. 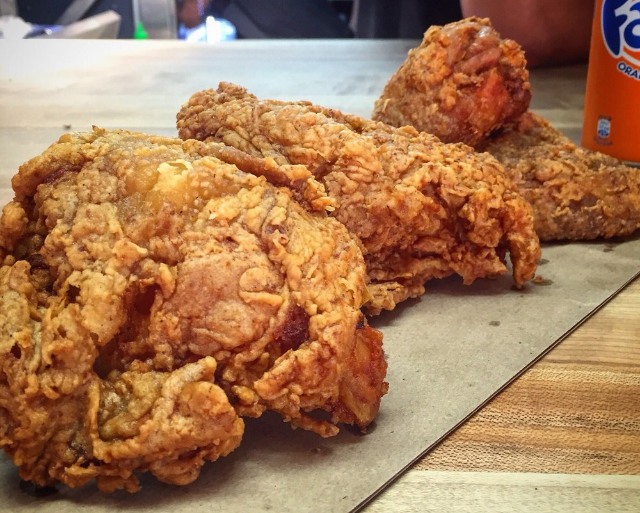 Schaller's Stube We couldn't get over the incredible sausage sandwiches at this offshoot of longtime UES meat handlers Schaller & Weber. Turns out they're banging out some pretty fly fried chicken as well, with plump, juicy pieces of poultry coated in a thick, peppery crust. The pieces are conveniently priced, too, meaning you can snag a $7 classic sausage sandwich and supplement with a wing/leg ($2), thigh ($3) or breast ($4) for just a few bucks more. 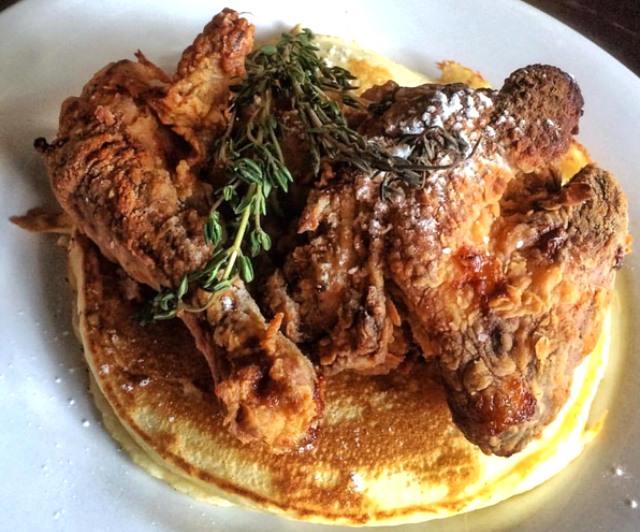 Bluejeen We were really impressed with this Harlem eatery when it opened in April and it seems they've done some retooling of their concept since then. We were especially impressed with chef Lance Knowling's Fried Young Chicken and it seems the chef is now only serving it as part of their family style supers on Sundays. The bird is succulent and juicy, the meat full of the flavors of thyme, with a super crunchy crust adhering to perfectly crisp skin. Get it with slow-cooked string beans, mac & cheese and biscuits for $15 per person from 4 p.m. until close on Sundays. 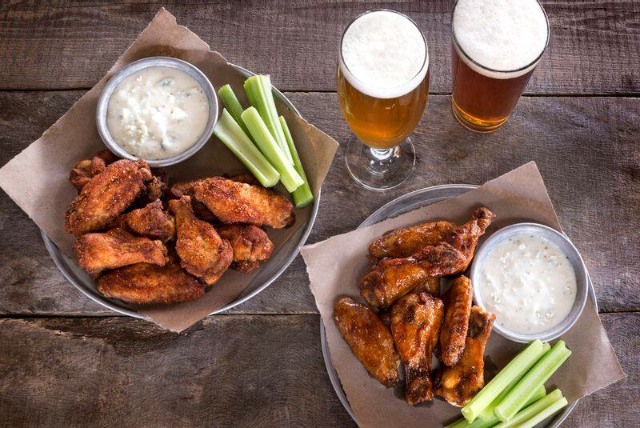 WINGS It's almost football season (my how the time flies) and stuffing your face with wings are one of the few ways to distract yourself from how much your team sucks.

World of Beer This Florida-based chain just opened its first NYC location in Chelsea on Tuesday, bringing hundreds of tap, bottle and canned beers from all over the globe. They're also doing shockingly delicious chicken wings, especially their Dry Rubbed version that taste like pulverized barbecue chips clinging to crisp chicken skin and juicy meat. They've got traditional Buffalo, as well, plus Garlic Parmesan, Hot Honey BBQ and Chipotle Porter, priced at $8 for five, $12 for 10 and $22 for 22. 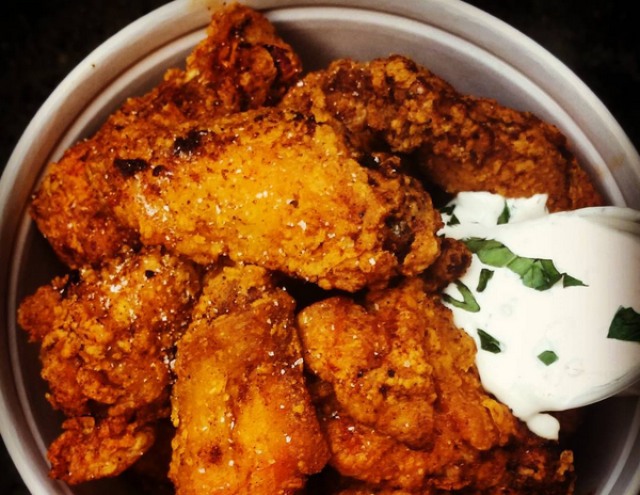 Meat Hook Sandwich This'll be the second football season this offshoot of Williamsburg's popular butcher shop Meat Hook will be offering some kind of takeout chicken wing option. Last year, they were classic Buffalo, but this year they're channeling Nashville with a hot chicken-style wing offering. Wings are dry cured in salt and pepper, dredged and then fried; once removed from the hot oil, they're tossed in a mix of dried peppers, salt, sugar, and—wait for it!—chicken schmaltz. On the side, a classic ranch for dipping that should sooth burning taste buds. Once they debut on September 9th, they'll be available for takeout or delivery in one or two pound buckets starting at $12.

It should be noted that Meat Hook Sandwich has also been doing a fried chicken sandwich in the same Nashville style topped with slaw for $13.

Meat Hook Sandwich is located at 495 Lorimer Street in Williamsburg 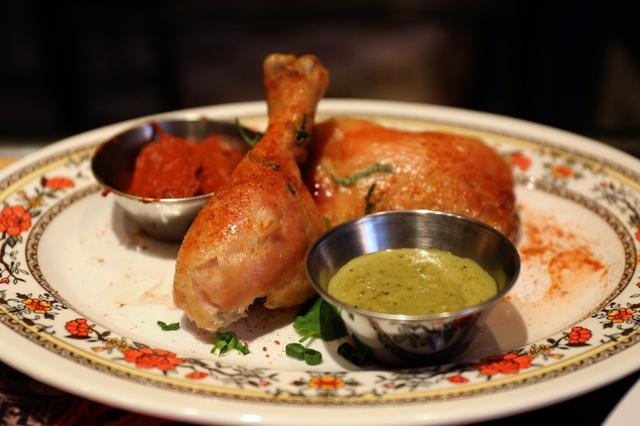 ROTISSERIE CHICKEN We leave behind the world of All Things Fried to enter the salty, spicy territory of this roast chicken preparation. Juicy drippings and flavorful skin await.

Streetbird Rotisserie Taking a break from his Yardbird offering, chef Marcus Samuelsson turns his attention to slow roasted birds by the quarter, half, or whole. "Samuelsson keeps the seasoning light on the actual bird—my leg and thigh combo nailed that juicy meat/crisp skin balance—preferring that you slather on the sauce of your choice (at fifty cents a pop)," photographer and Quick Bites columnist Scott Lynch said of his experiences. "I tried two of the five, the thick, fiery, and almost South Asian Streetbird Hot Sauce, and the thick, chili-based and almost Tex-Mex Green Cowboy, and both delivered a welcome punch."

Streetbird Rotisserie is located at 2149 Frederick Douglass Boulevard, on the corner of 116th Street 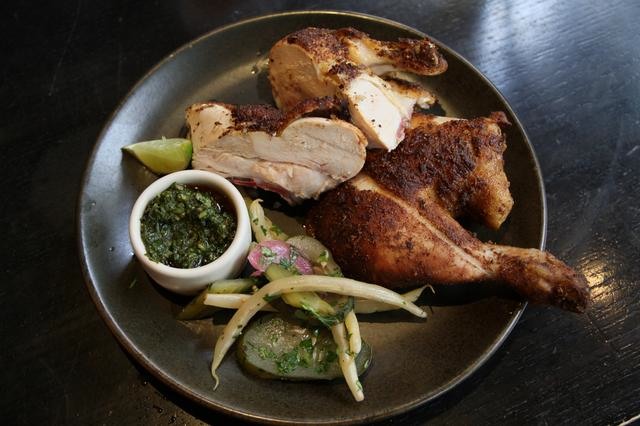 Broken Spoke Rotisserie Taking over the former Terroir space in Murray Hill, this small spot offers three rotisserie meats, including chicken at $22 for a whole and $13.50 for a half. To facilitate the eating, each dish comes with spicy chimichuri, "pickled things" and fresh local tortillas for DIY taco-type situation. To complete the full poultry experience, start with a crock of chicken liver ($6) served with stewed fruit. 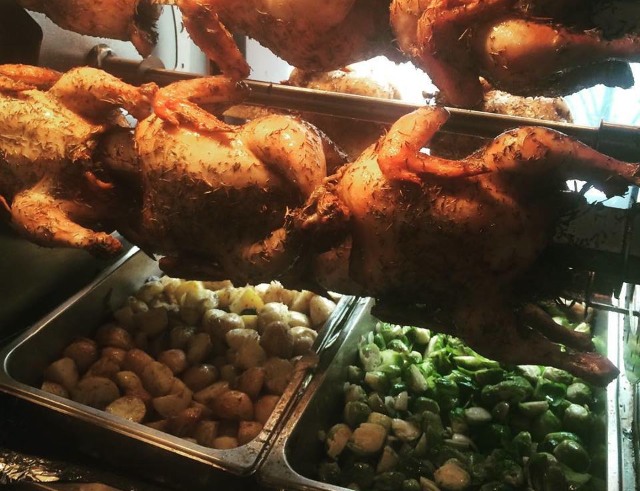 Papa Poule The birds at this quaint seven month old shop in SoHo speak with a thick French accent. Rosemary-covered birds spin on the eatery's spits, dripping their flavorful fat into trays of veggies slow-roasting below. The flavors here are more subtle than the spice-covered versions elsewhere, instead letting the flavor of the bird do the heavy lifting. A quarter chicken plus one side and one sauce sets you back $12.50; options for the latter two include roasted potatoes or roasted carrots (sides vary by day of the week) plus barbecue, mustard, chimichurri and red pepper aioli sauces. 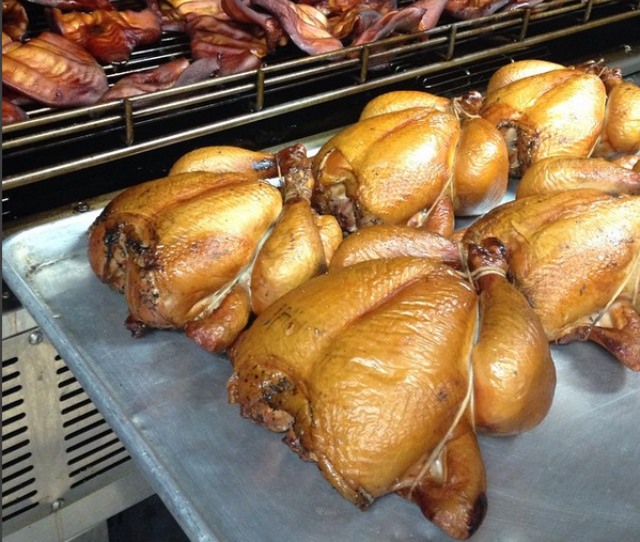 SMOKED Smoked barbecue chicken is pretty commonplace these days but what about versions not destined to be slathered in a sweet sauce?

Harry & Ida's Enter the General Store-like design of this recently opened Alphabet City joint and the first thing you'll notice are the smells: smokey, meaty, vinegary...eel-y? There are lots of things to unpack here—owner Will Horowitz of Duck's Eatery is clearly just starting to flex his muscles at his new spot—but let's focus on his smoked chicken for the time being. Whole birds emerged with a deep brown color from hours spent absorbing flavor and color from the on-site smoker. They'll sell it to you by the pound for $8.50 but if you're lucky, Horowitz may be experimenting with a smoked chicken salad sandwich if you stop by at the right moment.