A Day In The Life Of Scott Wiener, NYC's Professional Pizza Expert

Scott Wiener looks crestfallen. "I don't think this is the place," he whispers, glancing over the counter past the fluorescent lit pies. Wiener is tracing the memory of a discarded pizza box he passed on a nearby Brooklyn street a few months ago. It was a dazzling box from "someplace with an A, with these beautiful squiggly lines." Wiener knows when he sees a spectacular pizza box; he has about 780 of them stacked in the closet of his Brooklyn apartment.

As consolation, we order a plain slice before leaving and take it outside, determined to find the pizzeria responsible for the box with the beautiful squiggly lines. Wiener pauses to inspect the crust, utilizing his visual taste-buds. All the information he needs is contained within a single glance. "So super hot oven, which is really cool," he says. "But they really don't know how to roll the dough because it's got all of these crevices. When you ball up a piece of dough to rise, if you leave crevices in it then it creates fault lines in the crust."

He takes a bite under the din of an overhead J train.

"It's like a dollar slice," he shouts, passing me the twice bitten triangle. "It feels right. It's comforting. But this is why it's good, because it just takes the edge off." 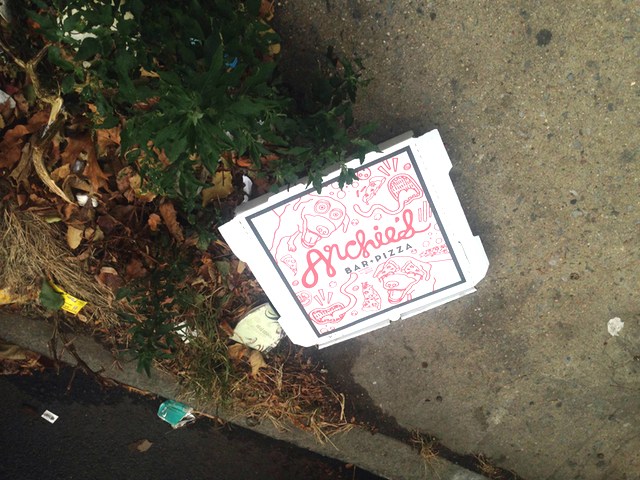 Archie's, a pizzeria nearby with an A, is just a few stops away, but with its soft lighting and draft beers, feels worlds apart. And that box! Perched on the shelf like a piece of art, it's festooned with bold, psychedelic lines depicting the owner's dog in red. Who knew someone could be so happy seeing an empty pizza box?

Before ordering, Wiener approaches the window to the kitchen and strikes up a conversation about the history of Archie's, at no point offering that he is the owner of Scott's Pizza Tours—which has been featured on National Geographic and the Travel Channel—or the holder of the Guinness World Record for the largest pizza box collection. In the moment, Wiener is just a 32-year-old guy from New Jersey looking for a slice of pizza on a Monday night.

We settle into a table with three slices (plain, pepperoni and garlic mushroom) and two cans of Narragansett. Wiener cuts into each slice as he talks about playing in bands with names like The Martha Dump Truck Massacre and Bikini Car Wash Co. Although he doesn't have time for music anymore, his approach to pizza tours stems from these experiences, both on and off the stage. But instead of thirty-minute shows, Wiener performs for three hours—with no loud drumming to hide behind—critically analyzing every stoner's dietary staple from a historical and scientific perspective. 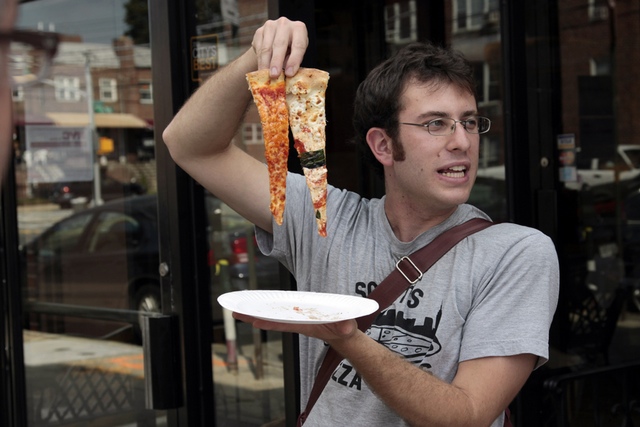 "This is the right idea," he says, after biting into a slice of pepperoni, which Wiener praises for its upturned salami edges. Based on the quality of Archie's pizza box, Wiener had his doubts about the pizza; sometimes pizzerias put all their energy into the boxes. But Wiener is smiling. "Eating this makes me feel like a kid," he explains. "I love it because it's so unpretentious. It just makes me feel good."

Feeling good is largely what paved the path for Wiener's self-created profession, which is generally understood to be a "pizza expert." The idea for Scott's Pizza Tours was conceived as Wiener's birthday party. When he wasn't living on a historic Ellis Island ferry turned quirky artists' abode (he was the Yankee Ferry's caretaker), Wiener would drive friends to different pizzerias around the city. To celebrate his 26th birthday, Wiener rented a school bus and shuffled 26 friends and family members to six pizzerias between Brooklyn and Harlem.

Wiener is good pizza company. Conversations weave seamlessly between nerdy pizza classifications—"This actually seems a little Greek, a relative of a bar pie. It's not a New York or a Neapolitan pizza. This is a whole different angle, a not hip, yet, type of pizza"—to his collection of around 150 Cold War-era spy novels from the '60s called the Nick Carter-Killmaster—"Not the Backstreet Boy." 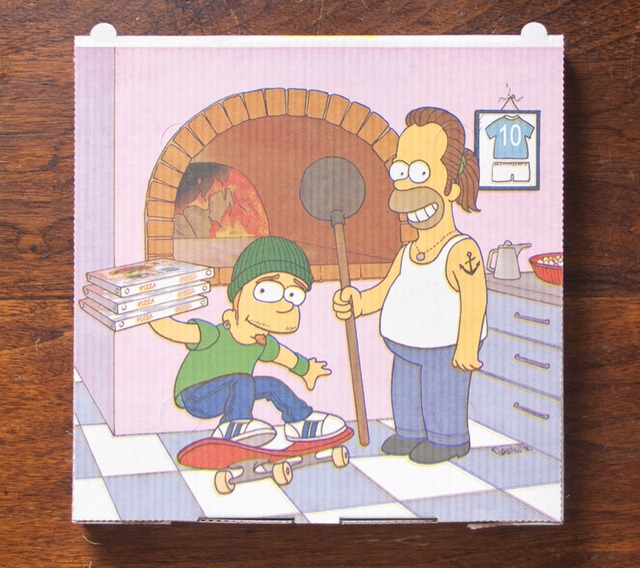 Pizza boxes satisfy all of Wiener's urges as a collector. He started his collection in 2008, inspired by a bright yellow box he saw in Israel. Five years later, he had 597 stacked in his closet, enough to earn him that world record. Not that he had stiff competition; according to Wiener, he's the only person in the world who collects pizza boxes, which might come as a surprise to some or make total sense to anyone concerned about the remnants of cheese or grease.

Most of the boxes are unused, however, acquired through gifts or purchased off eBay and at pizza box factories. Wiener's interest in pizza boxes is mostly historical, sociological, and aesthetic, as dissected in his book, "Viva La Pizza! The Art of the Pizza Box." But they occasionally hold personal significance, keepsakes from his travels and mementos of particular moments in life.

A Simpsons box, one of his favorites, will always remind Wiener of a girl he was seeing in Amsterdam. She took him pizza box hunting there with friends. The trip ended sadly, with a breakup, but the box remains "a treasure from this trip," unscathed from any of the residual heartache. Instead, its four corners contain an ecstatic moment when Wiener freaked out over an encounter with an amazing pizza box. 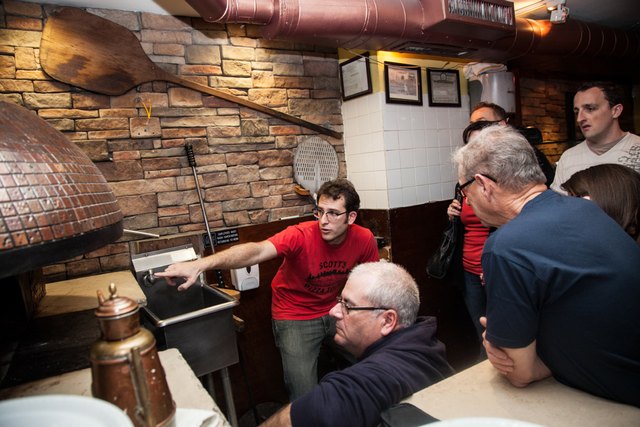 Wiener acknowledges the expectation to be a kooky, pizza-loving, box-hoarding caricature, but his demeanor and approach to pizza are more scholarly than cartoony; he's more intrigued by Lenny's oven than Lenny's appearance in Saturday Night Fever. Likewise, the fetishization of pizza culture via Tumblr memes and Urban Outfitters accessories doesn't interest him.

"I mean, I sound like such a tool, taking it so seriously, but for me, my apartment is not pizza stuff everywhere," he says. "I can't wear those T-shirts." Bagel Bites? "I love them! But that's not pizza..." He recently saw a documentary about his life shot by a Pratt student that revealed, to his surprise, a "weird darkness" bearing little resemblance to the animated face he puts on when doing a spot for Discovery Channel or ABC news.

"Up for Speedy Romeo?" Wiener asks, referring to one his favorite pizzerias, as we gather our empty plates. Wiener is trim, which doesn't fit my idea of a pizza guru. His secret? A 15 slice a week limit that he tracks on his iPhone using an app called Daytum, accompanied by a daily swimming schedule. It's Monday though, so the pizza count is low.

I remind him about getting the spectacular pizza box we supposedly came here for, but it's raining out, and Wiener has to eventually bike home to Bedford-Stuyvesant. "I'll be back," he says, the journey being far more important than the destination. 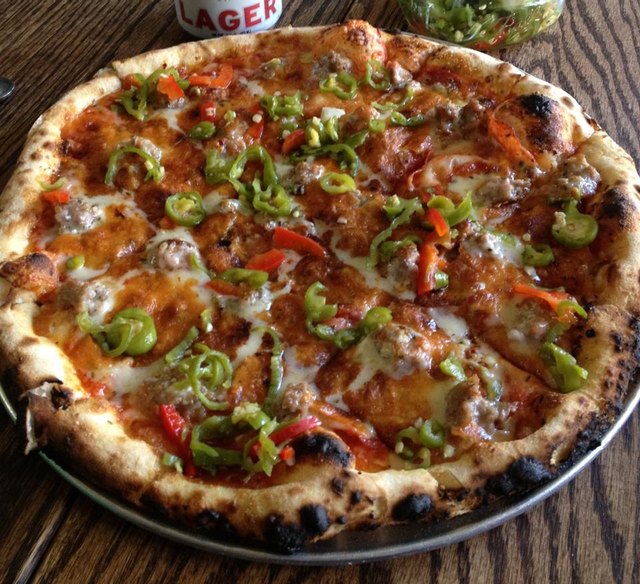 It's fifteen minutes before closing, so we order a pizza to-go and sit on a soggy bench outside. Wiener encourages me to open the box, quickly, saying "the box is the worst thing you can do to a pizza—ever. It's so bad." Steam lifts off the Saint Louie, a Saint Louis-style pie featuring provel, a cheese product that Wiener explains is a combination of swiss, mozzarella, and provolone. It's buttery, with the pickled chiles popping through a subtle layer of Italian sausage. Biting in, it's shocking how three pizzerias have each served what feels like entirely different cuisines.

Between giving five pizza tours a week, managing his pizza boxes—he's gearing up to fly to London and Berlin for an art exhibition of his collection—and organizing Slice Out Hunger, a charity that raises money for the Food Bank for New York City, Wiener acknowledges that he's drained. But the exhaustion is buoyed by the giddy acknowledgment that he's living a childhood dream, one a 12-year-old version of himself would approve of. "He'd be out of this mind," he says. "That to me is the greatest thing, if the younger version of yourself would approve of what you do now, because you're so much smarter and sharper and you're not bogged down by grownup bullshit yet."

Pizza devoured, I'm hoping there might be one more late night stop on this triple header, but Wiener has to bike home. It's going to be a long night; there are 500 goodie bags to pack.

Mitchell Kuga is a freelance writer definitely not based in Brooklyn and an editor of SALT, a publication about food and pain. You can email him at mitchellkuga@gmail.com.

#pizza
#pizza boxes
#Scott Wiener
#scott's pizza tours
#longform
#original
Do you know the scoop? Comment below or Send us a Tip