This summer's mostly mild temperatures have meant a little less sweating on the subway platform, but it's still the season for eating cold things, like some soup at this weekend's Some Like It Cold competition. For the forth year now, arts conglomerate the claque throws this food fundraiser, which pits some city chefs against one another for the coolest soup around. There may be some classics like gazpacho or vichyssoise, plus more updated entries like last year's winner, a Chilled Corn Soup with Roasted Corn, Peppers, and Buttermilk. Along the way, sip soup or a free Ketel One cocktails, then vote for your favorite of the day. The fun begins Sunday at 5 p.m.; tickets are $10 in advance or $15 at the door of Huckleberry Bar, which plays host for the evening. 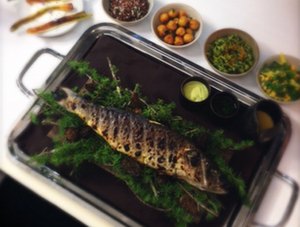 If you haven't yet braved midtown to sample Bryce Shuman's exemplary cuisine at his restaurant Betony, consider making your debut this Sunday, where the restaurant has begun serving a whole loup de mer for two. In English, that's a whole fish which has been stuffed with herbs then roasted whole. The fish arrives at the table accompanied by three sauces, including a green garlic puree and a salsa verde, plus five different sides, which could be anything from steamed new potatoes to sauteed corn with sorrel. The $85 dish is only available on Sundays; call 212-465-2400 to make a reservation.

Village cocktail bar Analogue hosts a tribute to Miles Davis this Sunday, with free jazz and some specialty beverages to match. In honor of the 55th anniversary of Davis's seminal album "Kind of Blue," the bar will feature performances by the Ryo Sasaki Trio, who will play some Davis classics. Behind the bar, head bartender Cliff Mejia offers some updated twists on popular cocktails of the late '50s. Complimentary Bombay Sapphire East cocktails are available for guests who RSVP at events@analoguenyc.com; other cocktails range from $14 - $16, with classy bar snacks also available.