Gothamist HQ has a bit of a problem when it comes to snacking. Our "Silver Table Of Sin" is like Tony Shalhoub's sweaty head in Men In Black—no matter how many Doughnut Plant packages we ravenously destroy, new dangerously delicious treats will pop back up in no time. All of which is to say that we recently found ourselves with multiple boxes of Sour Power Straws stashed around the office—too much Sour Power for even an admitted addict.

And after one afternoon sugar binge, we decided to get creative with our excess supply—and try to get drunk on the blindingly intense Sour Power Straws, which, for the uninitiated, are like Sour Patch Kids but all grown up and cheating on their second wives in a Hoboken hotel room with the babysitter and an ounce of terribly cut "cocaine." Below, enjoy our foolproof guide on how to make sour power moonshine that even mean Willy Wonka would be proud of—as well as recipes for four sour power cocktails. 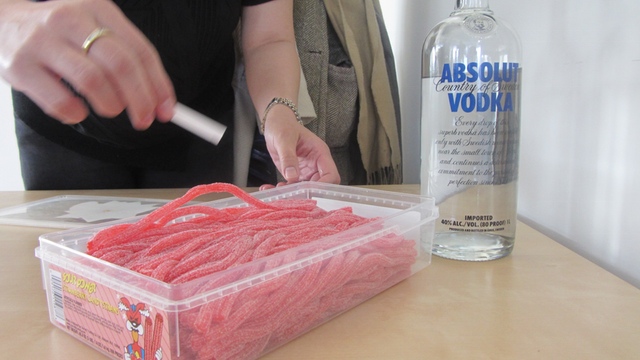 Inspired in part by the Qooking with Qream series on The Hairpin—which taught us that even the most vile celebrity-endorsed products could be harnessed to produce something edible—we infused a bottle of Absolut Vodka with somewhere between 70-90 strawberry sour power straws on a recent Wednesday.

At best, this would set us on our way to crafting an Absolut College line of specialty liquors for the less-developed palettes of undergrads. Maybe we'd find that the straws themselves had also been deliciously infused with vodka, an alcoholic treat you could eat anywhere with impudence. Maybe the Dorval Trading Company would want to go into business with us—maybe their board of directors would Hudsucker Proxy us into presidency of the company. These all seemed highly likely scenarios to a person whose bloodstream was 75% artificially flavored. 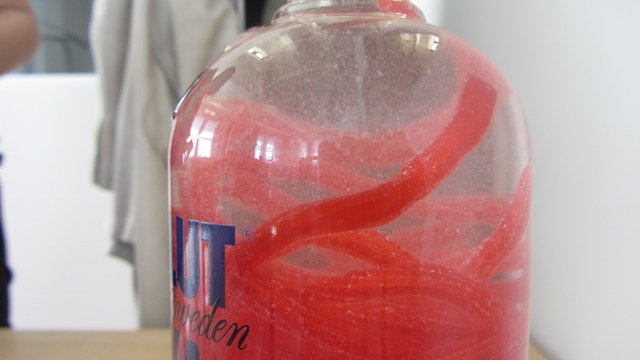 You can see the packed bottle below left. We made an initial game plan: leave the straws in for a few weeks in a dark space, taking photos and tentatively taste-testing the concoction along the way. 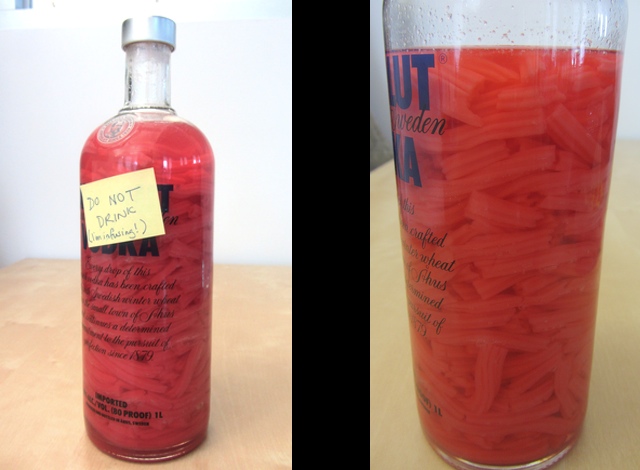 And by Thursday, that plan was totally scrapped. As you can see in the photo above right, the straws had already begun to lose their form. This is probably because they were soaked in 80 proof alcohol, though we may never be sure. It was only a day old, and complaints began coming in from other parts of the office. But we were determined not to throw the disgustingly red baby out with the vodka water.

We waited one more day to make sure the antioxidants and glucose-fructose syrup knew we respected their process, then performed our taste test on Friday. At this point, the remaining sour straws had dissolved into pulpy segments that sort of looked like baby eels. Here's the most important thing for any prospective sour power moonshine makers: you need to make sure you do not, DO NOT, get any of those into your drink. You're going to want to sift the liquid out without any of the pulpy straw extract—they taste horrible, like chewing on strands of a soggy shoe. 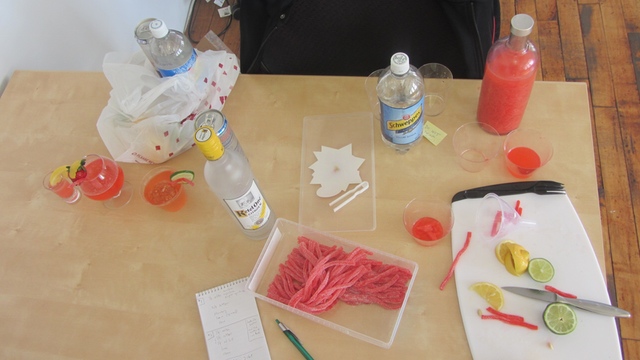 The actual vodka was predominantly sweet, but it also surprisingly retained much of the sour flavor. As one person put it, we achieved our goal: it tasted like "sour straws in liquid form. It doesn't taste like vodka." Which is basically a good thing—the point of flavored liquors is to mask the thing you are really drinking so that the inebriation creeps up on you like a Chiquita banana lady. 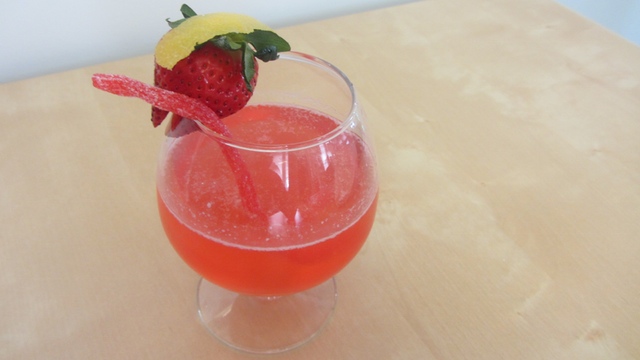 The first, and by far most successful, drink was "Red Beard"—that's 1/3 sour power moonshine, 2/3 seltzer, a little squeezed lemon, a strawberry for garnish, and one straw hanging over. "It's one of those things when you're younger you would probably drink too much of it every time," one person said. Another agreed: "This would be dangerous for high school girls." 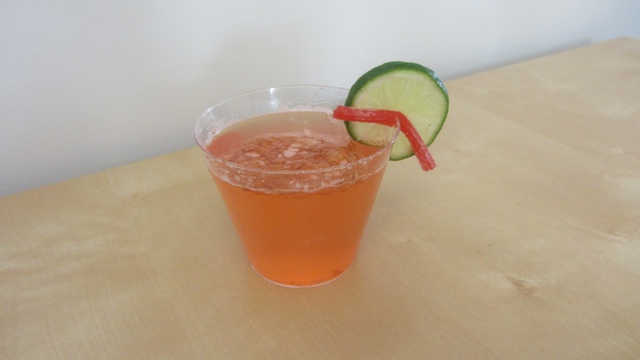 The second, and arguably least successful, drink was "The Sea Creature"—that's 1/4 sour power moonshine, 1/2 seltzer, and 1/4 red bull, with a lime and straw for garnish. Dear reader, it was disgusting. Something mixed together very wrong, producing a curdling paper thin layer on top that looked like seafoam washed up on a beach. Hence its name. 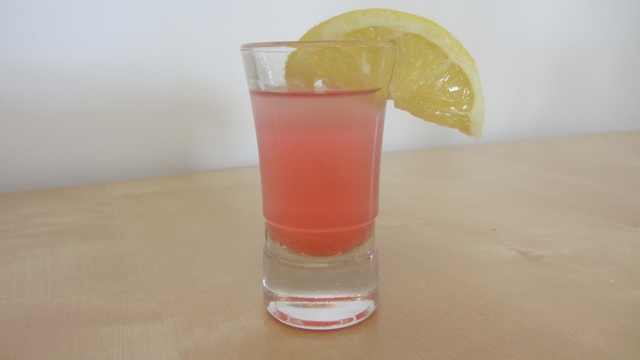 "The One Liner" (Ben Yakas/Gothamist)

The third drink was "The One Liner"—a shot consisting of 2/3 Citron, 1/3 sour power moonshine, and lemon caked with sugar from the straw package. The person who gulped this down chimed in about 30 seconds later: "the aftertaste of this shot is very good!" 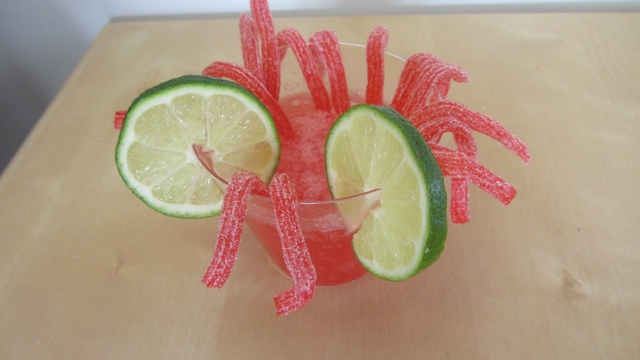 The final drink was "The Medusa"—1/2 sour power moonshine, 1/2 seltzer, with straws all around and two limes for eyes. One person summed up this ridiculously sweet liquid: "It's not the worst drink I've ever had." Truer words were not spoken that day.

In conclusion, the experiment was a success: No interns were rushed to the hospital to have their stomachs pumped, and we proved to ourselves that we don't need to pay money for a Lime-A-Rita or canned Whiskey to have a sweet ass time.