The building housing the White Horse Tavern, a historic, no-fuss dive located at 567 Hudson Street in Greenwich Village, has been sold to the notorious landlord Steve Croman, it was reported last week, worrying longtime patrons, locals, and even tourists. Opened in 1880, the bar touts itself as the second-oldest continuously run tavern in New York City, and has the stories to match.

In the mid-20th century, literary luminaries including James Baldwin and Anaïs Nin frequented the watering hole, and Jack Kerouac was a particularly unruly patron. The Greenwich Village Society for Historic Preservation notes that Kerouac was ejected from the bar so many times that someone took it upon themselves to carve “JACK GO HOME!” on a bathroom stall. Legend has it that the idea for the Village Voice (RIP) was born over drinks at the bar, known colloquially as "The Horse." And most famously, the White Horse is where Welsh poet Dylan Thomas swilled his final drinks before his death; his portrait still hangs by his usual seat. 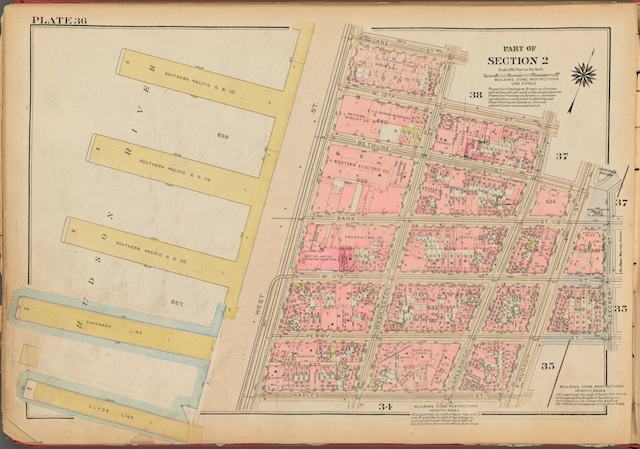 A map from 1927 depicting the Greenwich Village, and piers along the Hudson River. (Courtesy of the NYPL/Lionel Pincus and Princess Firyal Map Division) 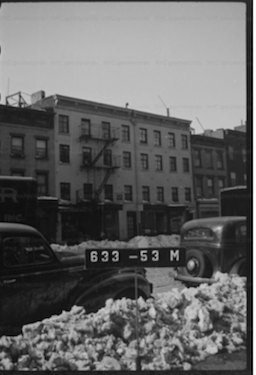 The White Horse was originally opened as a longshoreman's bar, back when Greenwich Village was a working-class neighborhood, as Andrew Berman, the Executive Director of the Greenwich Village Society for Historic Preservation, told Gothamist. In the late 19th century, European immigrants flocked to that part of the Village often working in the coal and lumber yards, and the piers that lay along the nearby Hudson River. Italian immigrants settled into more well-to-do pockets of the Greenwich Village back then, but the area near the White Horse Tavern—a stone's throw from the city's first elevated train line—was predominantly Irish.

In the 1930s and 1940s, the White Horse garnered a reputation for being a haven for left-leaning denizens, communists, and union organizers, such as the National Maritime Union. The bar cemented its reputation as a bohemian hangout by the fifties, though, when literary figures were known to drink and revel there. Authors including William Styron and Norman Mailer frequented the bar, often holding Sunday afternoon hangouts, partially due to the fact that New Directions publisher James Laughlin had a place nearby, and authors would often stay there when they were in town, as Bill Morgan notes in his book. Musicians also rubbed elbows at the bar, including folk legends Bob Dylan and Mary Travers.

The urban planning activist Jane Jacobs lived on the same block as the White Horse Tavern, at 555 Hudson Street, between Perry and West 11th Streets (it's since been named Jane Jacobs Way). A regular at the bar, Jacobs immortalized that very strip of the Greenwich Village in her book The Death and Life of Great American Cities, describing the unconscious routines and rituals that comprised life there as the "sidewalk ballet."

Jacobs featured the White Horse in her book, too, describing the seamless shift from longshoreman locals drinking there during the day and the literary set commingling in the evening, all the while "a solid wave of conversation and animation surges out and hits you; very warming." The same year that Jacobs published her landmark tome, that block was in danger of being destroyed —as Berman notes, the contentious city planner Robert Moses and then-Mayor Robert Wagner wanted to tear down 14 blocks in that area in the name of "slum clearance." 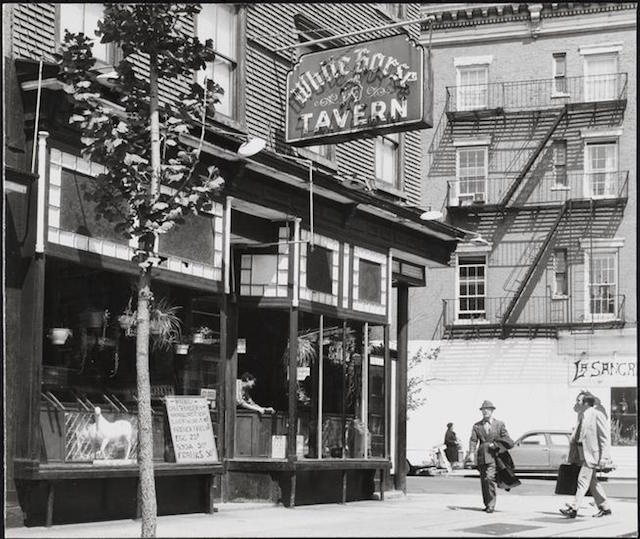 "What’s amazing is that the bar is largely physically unchanged from its 20th century heyday, and it continues to be a mecca for visitors from around the world who are interested in its incredible literary history, while at the same time continuing to serve as kind of a neighborhood watering hole in the Village," Berman says.

The bar received a historic landmark designation in 1969, which has helped keep it somewhat intact. On Monday, The Greenwich Village Society for Historic Preservation submitted a request to the City’s Landmarks Preservation Commission, arguing that the bar's interior should be a landmark as well. But even if that happens, it still won't protect it from becoming an upscale, completely new version of the White Horse we know.

In his letter to the Landmarks Commission, Berman writes that the bar has functioned as a contemporary salon, where "artists, writers, and intellectuals gathered to talk, argue, pontificate, and share and cross-pollinate ideas."

It's unclear what the new ownership will mean for this bar, though the fact that it's located in the Greenwich Village Historic District means it won't be torn down. "It’s very hard to mandate that the character of a business remain the same," Berman says. "There’s nothing legally preventing anyone from actually turning it into something that’s not even a bar or a tavern at all, although that doesn’t sound like it’s their intention."

#bar
#dylan thomas
#flashback
#greenwich village
#history
#white horse tavern
#original
Do you know the scoop? Comment below or Send us a Tip