A Bounty of Blueberries 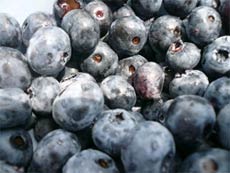 Enjoy it folks -- blueberries are in peak season. Although technically they are in season from May to October, they've exploded recently. They're showing up in farmers' markets (here's a map of map of NYC Greenmarkets), CSA shares, and even the New York Times magazine's sunday recipes.

The recipes feature both cultivated and wild blueberries, both of which are available locally. This "superfood" is not only tasty, but rich in antioxidants, so you can have a good excuse to toss them everywhere -- in yogurt, cereal, and salads, or to incorporate them into any number of dishes. Aside from the tried and true blueberry muffins or pancakes (try this vegan version from Moby), they can just as easily be incorporated into main dishes like this peppercorn-crusted muscovy duck recipe, a plethora of desserts, or even cocktails. Blueberry mojito, anyone?

Store your blueberries covered in the fridge and wash them just before using. They also freeze quite well: Make sure they are unwashed and dry, then freeze them in a single layer on a cookie sheet. Once frozen, place them in an airtight container.

#blueberries
#cocktails
#cooking
#csa
#in season
#produce
#recipes
Do you know the scoop? Comment below or Send us a Tip
A new Gothamist is coming! We’ve moved comments over to our beta site. Click here to join the conversation and get a preview of our new website.