A Bounty Of Bivalves Await At Oyster Week, Which Kicks Off Tonight

Our city's special relationship with oysters gets a rightful weeklong celebration starting today. New York Oyster Week kicks off this evening, bringing a bounty of bivalve events that even the Walrus would approve of. There are quite a few events available depending on your slurping capabilities and the size of your wallet; here are a few we're looking forward to.

Tonight's Oyster Fest opening event goes down at London Lennie's, where guests can compete in a Slurp Off for a chance to win $500 plus Buck-A-Shuck oyster specials where you'll get the slimy creatures for, of course, just $1. The fun continues through September 27th with live music, drink specials and an oyster-packed menu of Po' Boys, stew, fried oysters and lots more. 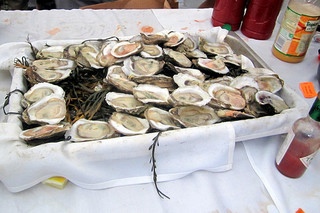 The week's biggest event goes down tomorrow at the Stone Street Oyster Festival, the largest outdoor oyster festival in Manhattan that's now celebrating its 10th year. Organizers are expecting 10,000 bivalve fanatics to descend on the Financial District street eager to slurp up the nearly 35,000 oysters being shucked by restaurants in the area. They'll also be attempting to beat the Guinness Book of World Record for the Most Oyster Shell Recovered from a Single Day Oyster Event so...come hungry! 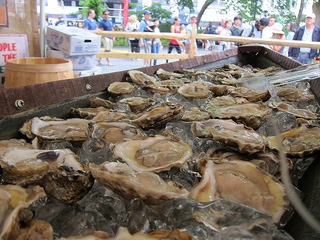 Brooklyn has been left out of previous oyster week festivities, but organizers are remedying that this year with Brooklyn on the Half Shell, which takes over the rooftop at 172 Sterling Place for an all-you-can-eat raw oyster extravaganza on Thursday, September 26th. Queens Brewery provides suds for sipping, Ripe Life Wines brings bottles of their Clambake Chardonnay and you can also munch on oyster po'boys to offset all the alcohol. A $50 donation is suggested with 100% of proceeds going to The New York Harbor School, a small public high school on Governors Island.

#oyster fest
#oysters
#original
Do you know the scoop? Comment below or Send us a Tip