The 9/11 Memorial and Museum's plan for a restaurant with a "subdued, seasonal, mostly vegetarian menu" has gone the way of the 9/11 cheese plate.

The Post's Steve Cuozzo reports, "The mezzanine-level cafe inside the tears-inducing museum was supposed to open this summer with a seasonal, savory menu including grilled cheese and salmon confit — plus liquor. Instead, museum officials said, the cafe operated by Danny Meyer’s Union Square Hospitality Group will serve only pastries, tea and coffee when it launches later this month."

Cuozzo had written in May that the subtext of placing a restaurant in the museum was "Never forget . . . to pig out!":

I can go for tomato soup and grilled cheese after staring at Picassos for a few hours. My appetite isn’t the same after a tour through hell.

Memorial/museum president Joe Daniels argues that such solemn sites as Gettysburg and Israel’s Yad Vashem have restaurants, too. But Gettysburg was fought 151 years ago, and Yad Vashem is not at the site where the Holocaust took place. The 9/11 Museum is where the terrorist attack took place a mere 13 years ago — and where remains of 1,115 unidentified victims are stored.

Today, Cuozzo says, "A museum spokesman declined to give a reason for the recent decision to serve only pastries, coffee and tea, at least for now. He said the eatery — no longer to be called the Pavilion Cafe, but simply The Cafe — will open with about half of the 80 seats originally planned, although the rest would eventually be added." However, it's unclear if the museum will continue to offer private parties with alcohol. 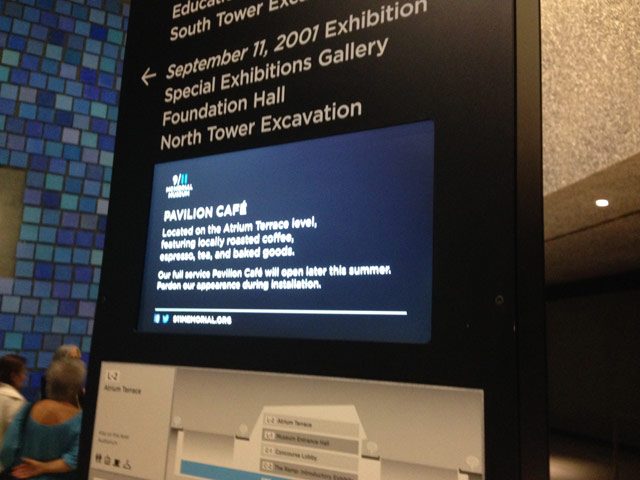 Back in May, a sign proclaiming the Pavilion Cafe would be opening this summer (Jen Chung/Gothamist)

Well, folks can always buy some fast food and chow down at the Memorial itself—people do it, even though it's not allowed!

#9/11 memorial
#9/11 museum
#danny meyer
#never forget
Do you know the scoop? Comment below or Send us a Tip