9 Toasty Subterranean Bars To Hide In 'Til Spring

Reality check: it's snowed in New England already. Instead of hibernating in your apartment, hunker down where the winds can't reach you in one of the city's cute underground watering holes. From intimate and romantic to divey and boisterous, these subterranean sanctuaries offer refuge from the frigid winter weather for whatever suits your mood. 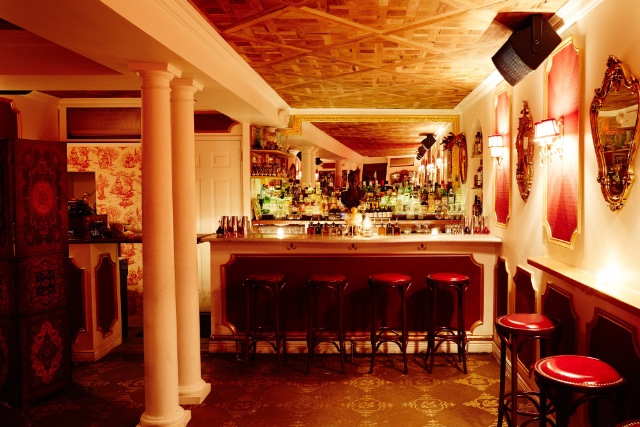 LE BOUDOIR Scope out the secret bookshelf at Chez Moi in Brooklyn Heights and follow the staircase to this basement lounge inspired by Marie Antoinette. Poke around Antoinette's bookshelf, sip French 75 cocktails from silver-plated goblets and relieve yourself in the bathrooms, which are "exact replica[s] of her private powder room." Cocktails, designed by The Dead Rabbit alum Franky Marshall, allude to the opulence of the era—for the aristocracy, anyway—like the Dauphin, made with absinthe, chile liqueur, almond milk, coconut and cacao nibs. 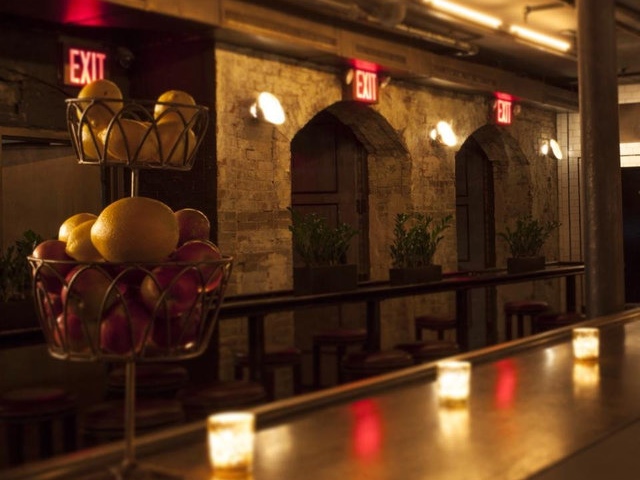 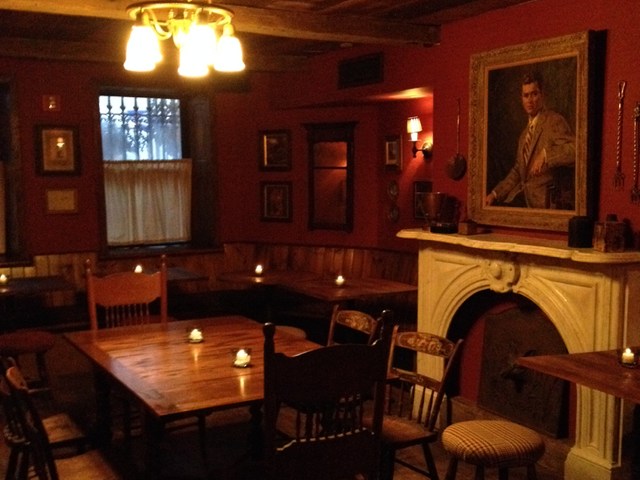 THE SHAKESPEARE Pull back the velvet curtain and descend into a 16th-century style British pub decked out in tons of wood, a low ceiling and a mock fireplace. Drinks center around British brews, including 15 beers and ciders on tap and cask ales from top producers across the pond; the pub snacks are top notch, especially the Scotch Egg with tartar sauce and a Welsh Rarebit made with Tickler Cheddar. If you're lucky, you'll score a seat in the Snug: a private booth just off the bar with a convenient window to order more drinks and grub.

BAR BELOW RYE Beneath Williamsburg's living room-esque restaurant Rye is a sister bar decked out in rustic wood panels reminiscent of a cozy cabin in the woods. The restaurant's known for its aged Old Fashioneds, especially this time of the year, and they're serving them downstairs, too. The space holds regular events like DJs, live music and sometimes the promise of free food. 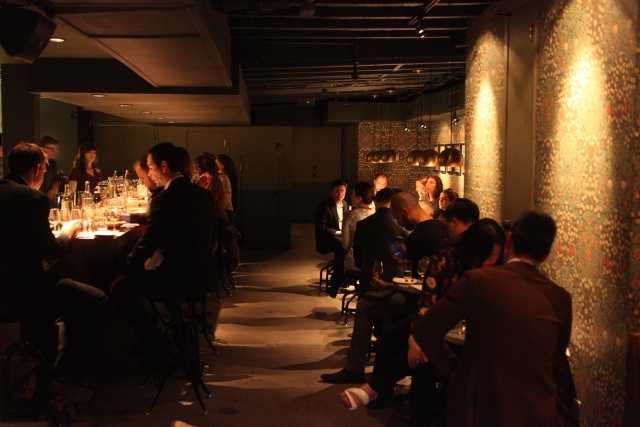 THE UP & UP I'll never stop shouting about this underground cocktail bar on MacDougal Street, that's how much I love it. It's both a welcome respite from the insanity of NYU land and also chilly weather and blustery winds. Their seasonal menu's got belly warming cocktails like the Conflict Mint ($15), made with Bowmore Small Batch Scotch, Cocchi Americano, Oloroso Sherry and mint. 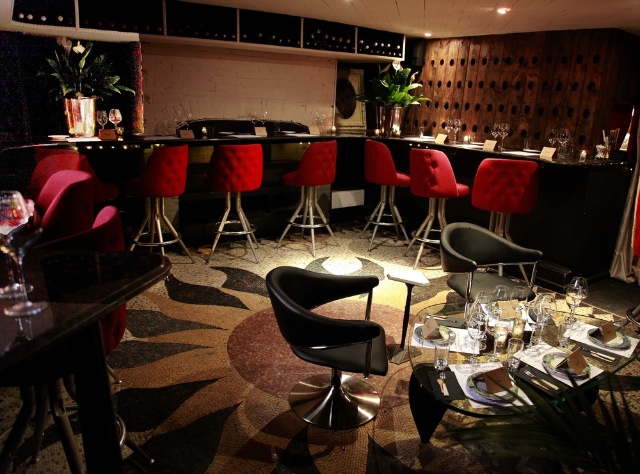 RIDDLING WIDDOW Also on MacDougal Street, this spot is dedicated to the delightful effervescence of sparkling wines. The "underground champagne parlor" is quite small, with just 16 seats for sampling their selection of bubblies. Vintages are available by the glass or bottle, with prices ranging from $9 and up to $25 by the glass for the fancy stuff. There's also a $136 bottle of Lahertes Freres champagne for special occasions. 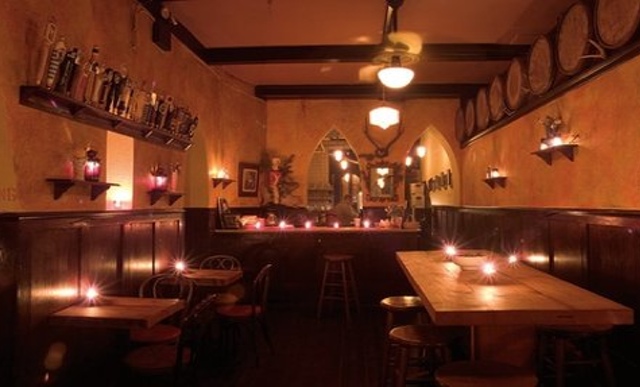 JIMMY'S NO 43 This 7th street standby welcomes adventurous beer drinkers and anyone who just likes a pint in a casual, convivial environment. They're serious about the suds here and are constantly changing out their tap beer selection with the seasons and new offerings from craft breweries. Right now that includes brews like Barrier Barnacle Brown Ale, Other Half Dog Cascadian Dark Ale and Scaldis Noel.

Pay attention to their website for fun events, not only in their performance venue The Back Room, but also food-and-booze celebrations like the upcoming highlight of French classic cassoulet. Cool beers, hearty casserole and candlelight make for an ideal evening hunkered underground. 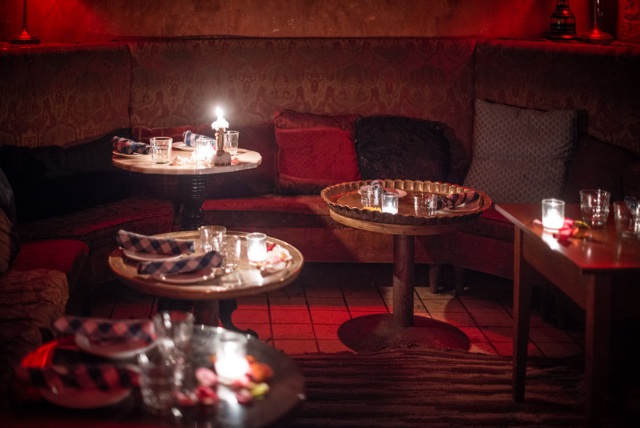 SHALEL LOUNGE This Upper West Side date spot embodies the epitome of romance. Rose petals, candlelight and cushions for canoodling spell a winner for twosomes looking to kindle some quality time. The Moroccan-inspired finger foods are the way to go—hard to lock lips on a full stomach—and opt to split a bottle of red wine to further get into the spirit. 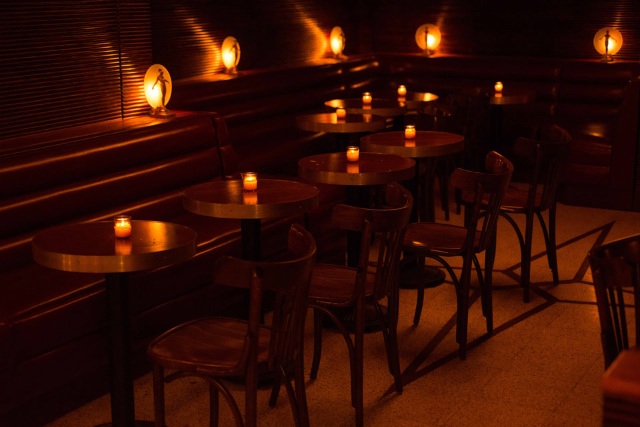 SLOWLY SHIRLEY The underground counterpart to Acme's Jon Neidich and Pegu Club/NoMad Hotel veteran Jim Kearns's throwback spot Happiest Hour, located upstairs, Slowly Shirley's another one for cocktail devotees. There are classics like Old Fashioneds and Martinis, and their house offerings, too. Before descending into drunkenness, try one of their bar snacks, like the mac n' cheese bites and a smoked fish dip served with Ritz crackers.

#subterranean bars
#underground bars
#original
Do you know the scoop? Comment below or Send us a Tip