One of the best parts about fall has got to be Oktoberfest, but if a trip to Munich is out of the question, there are plenty of ways to celebrate here in New York City, too. With an overwhelming amount of options available, it can be hard to find the ideal place to get your beer and brat fix. Here are some of the best spots for celebrating in the city, from traditional beer halls to local breweries.

Zum Schneider's Munich on the East River This East Village beer hall continues its annual Oktoberfest celebration, Munich on the East River, which is billed as an "unforgettable and traditional" Oktoberfest experience. Authentic decor, music, and food, as well as exclusive German brews, are to be expected, as well as a variety of vendors and games. With a staff dressed in dirndl and lederhosen, and fluent in German as well as English, this event is a must for serious Oktoberfest fans. The event runs from Friday, September 29 - Sunday, October 8, with tickets ranging from $10 - $100, depending on day and services selected. 107 Avenue C, (212) 598-1098; zumschneider.com

45 Days of Oktoberfest at Loreley Restaurant & Biergarten Loreley's Oktoberfest celebration on the LES boasts a full month and a half of events, most of them free. Highlights include a ceremonial keg tapping and pig roast on September 16, to kick off the festivities, and a traditional German beer tasting and dinner with "beer expert" Rudi Eilers on October 4. Seasonal beer selections will also be rotating on tap, with a variety of brews to choose from. Through October 31. 7 Rivington Street, (212) 253-7077; loreleynyc.com

Oktoberfest in Dumbo The Manhattan Bridge Archway will be transformed into a traditional German beer hall on Friday, October 6 and Saturday, October 7, when the Dumbo neighborhood in Brooklyn hosts its second annual Oktoberfest celebration. The schedule of events include traditional polka and oompah bands, as well as an arts & crafts section for kids, and plenty of German food and beer. The event is free. 155 Water Street, (718) 237-8700; Dumbo Oktoberfest 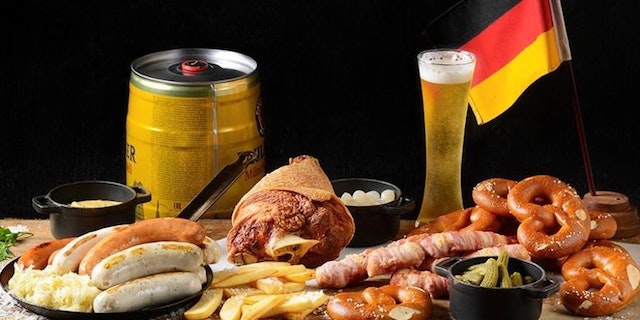 Threes Brewing Oktoberfest Oktoberfest at Threes Brewing in Gowanus is all about the brats and the beer—the brewery is partnering with Brooklyn butcher the Meat Hook for their celebration. Expect a slew of new brews from Threes, like the first run of a recent pilsner, as well as a wide selection of sausages, which range from the traditional (bratwurst) to the unexpected (chicken coconut curry). The festivities will take place on Friday, September 15 to Sunday, September 17. 333 Douglass Street, (718) 522-2110; threesbrewing.com

Massoni Oktoberfest Chef Dale Talde and his NoMad restaurant Massoni will celebrate Oktoberfest on Saturday, September 16 and Saturday, September 23. Purchase of a ticket includes two hours of unlimited food and drink—highlights from the menu include schnitzel, sausages, and pretzels, as well as desserts like strudel and plenty of beer. There are seatings at 1 and 4 p.m. on both days, and tickets are $39. 11 East 31st Street, (212) 951-1141; massoninyc.com

Bronxtoberfest at Bronx Brewery This Bronx brewery with an outdoor garden is welcoming Oktoberfest to the borough with a celebration on September 30. One of the last outdoor events of the season, Bronxtoberfest will include live music, Oktoberfest themed food, and beer, of course. Tickets range from $5 to $15. 856 East 136th Street in Port Morris, (718) 402-1000; bronxbrewery.com

Bohemian Hall Oktoberfest Queens beer garden Bohemian Hall is celebrating Oktoberfest over three weekends in late September and October. Catch a stein hoisting on all three Fridays in the afternoon; live entertainment and a special Oktoberfest menu are also part of the weekend offerings. There's even a pig roast during the first weekend, to kick off festivities. The special events occur on September 23 - 24, September 30 - October 1, and October 7 - 8. 2919 24th Avenue in Astoria, (718) 274-4925; bohemianhall

#beer
#oktoberfest
#original
Do you know the scoop? Comment below or Send us a Tip