NYC's craft cocktail craze has inspired a refreshing new wave of East Asian-inspired cocktails, which take a studious approach to cultural traditions, with high-quality and house-made ingredients. Many of these new cocktail bars owe some degree of debt to one of Manhattan's original speakeasies, Angel's Share, a Japanese cocktail bar in the East Village. It's no longer necessary to crowd into that tiny and exclusive space to savor the complexities of these drinks, as mixologists around the city have crafted enticing cocktail menus featuring cocktails influenced by East Asian flavors and traditions. Here's where to find them. 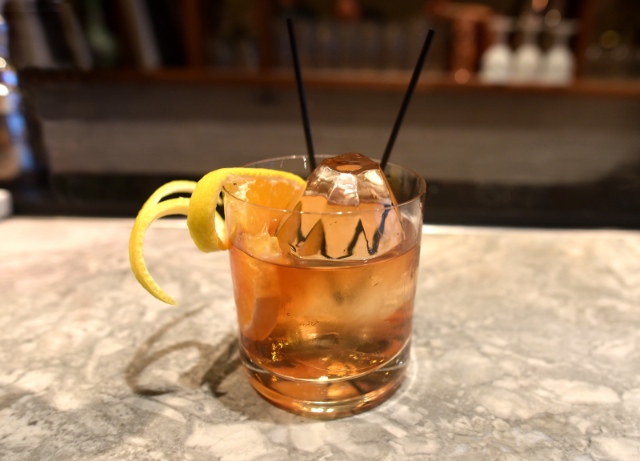 PIORA If you appreciate the art of cocktail making, you should absolutely score a bar seat at Piora, a West Village restaurant that celebrates the Korean and Italian heritage of its owners. From there, you can observe mixologist Shinya Yamao work magic in his dapper white suit jacket with unique barware that he selects. With perfect technique and a beautiful set of hand-carved Japanese knives, Yamao chips away at ice to make an amazing diamond-shaped block for the gorgeous Wear & Tear ($15), an aperitif made from rye, Aperol, Chartreuse Jaune, Cinzano, and Angostura bitters, which has a perfect balance of bitter and sweet.

For something stronger, order the (off-menu) Salary Man, a name you'll know if you're a Murakami fan: "Salary Man" in Japan is a nickname for a businessman in a suit. At Piora, it's a highball glass of whiskey mixed with soda water. Don't miss the Lavished Lavender ($16), either, a refreshing and elegant drink with dried lavender and beaten egg white. Visiting Piora during happy hour, from 5:30 - 7 p.m. daily would be an excellent moment to sip slowly and enjoy the atmosphere. Grab some Monkey Bread—made with whipped ricotta and roasted seaweed butter, to soak up some of the booze—or stay for a proper meal at this Michelin-starred restaurant. 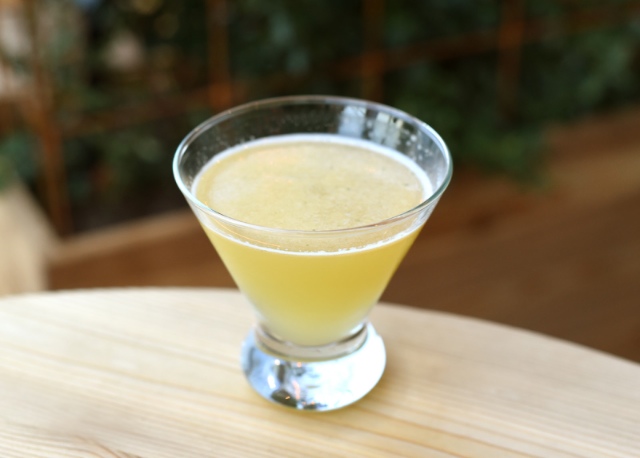 KIMOTO ROOFTOP BEER GARDEN Just opened this fall, Kimoto boasts one of the most attractive rooftop bars in the city, much of which is located indoors so you can actually enjoy the stunning views year-round. Head bartender Dave Danger has created a playful list of drinks featuring shochu, a Japanese distillate typically made from barley, and whiskies from Japan. The cocktails include house-made infusions and spirits made from galangal, lemongrass, and togarashi, a spicy red chili blend.

Come to Kimoto hungry for delicious and quirky finger foods, like the Spam Sushi Dog, and octopus with tonkatsu sauce and shaved bonito. The Enlightenment is Danger's sophisticated and refreshing approach to a Japanese daiquiri; it is made with green tea-infused shochu, cantaloupe, and kabosu, and served in a stemless martini glass. There's also a Michelada made with Sapporo, wasabi, seaweed, and shishito, and destined to be imbibed alongside the spicy chicken wings. 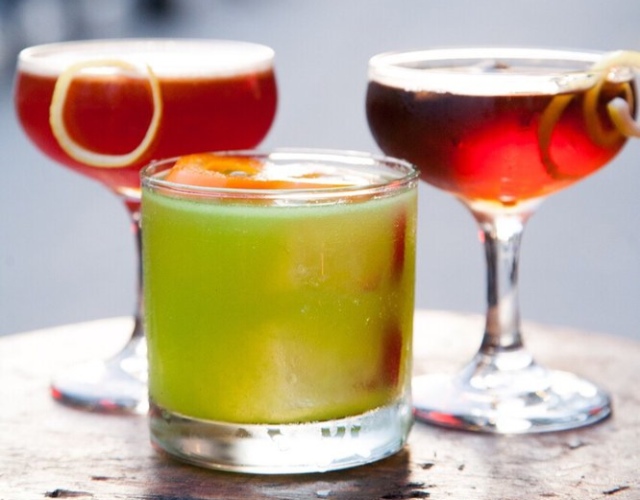 LUMOS If an underground bar serving cocktails made from a high-proof sorghum-based Chinese spirit called Baijiu sounds somewhat unusual, well—it is! Lumos is for the adventurous drinker who is not afraid to experience unfamiliar flavors (and spend serious dollars on it, too! Lumos' drinks range from $15 to $68 for one featuring black truffles). Mixologist and co-owner Orson Salicetti, formerly of Apotheke, decided to open the first BaiJiu-focused bar in the U.S. because he felt that New Yorkers were ready for something new and different, and he wanted to highlight one of the oldest spirits in the world, which varies drastically in style and taste.

The bartenders at Lumos are BaiJiu experts and can tell you all about it. Try the delicious and warming autumnal Fallen South ($15), made with pumpkin puree and a "secret spice blend," or the attractive and savory Goji House Cocktail ($15), dusted with aleppo pepper and served in a frosted coupe with a salted rim. On some Thursdays and weekend nights, there is entertainment and tables need to be reserved online. Don't miss the bar menu, which Salicetti's mother, a renowned chef, created. 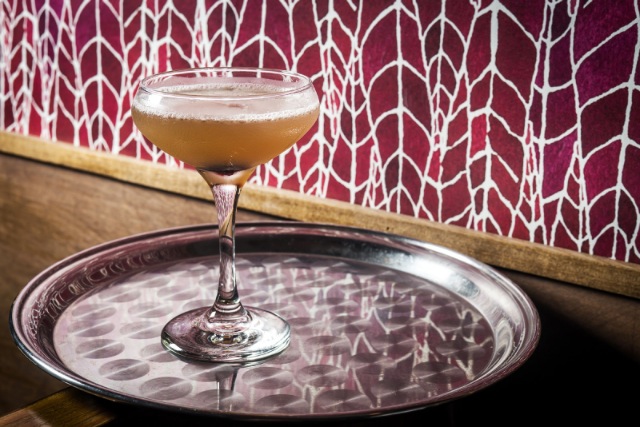 FUNG TU This hip, casual Lower East Side restaurant is known for its inventive, seasonal Chinese-American cuisine, as well as its funky, gluggable natural wine. But you'd be remiss if you didn't try their cocktails, created collaboratively between partner and wine director Jason Wagner and his bartender Justin Hampton. For a fun, pre-dinner dram, opt for The Last Emperor ($13), a shaken cocktail derived from the gin-based Prohibition-era cocktail the Last Word; the drink has a nice balance of umami and refreshing sweetness. The Baijiu Bijou ($13) is made with Hong Kong BaiJiu, Chartreuse, and sweet Dolin vermouth; yes, it is as boozy and strongly flavored as it sounds! People who typically drink Manhattans will like this one. Also, don't miss the dessert cocktail, the Red Panda, debuting this fall, which features sesame washed cognac, shaken with house-made cashew orgeat and orange bitters. 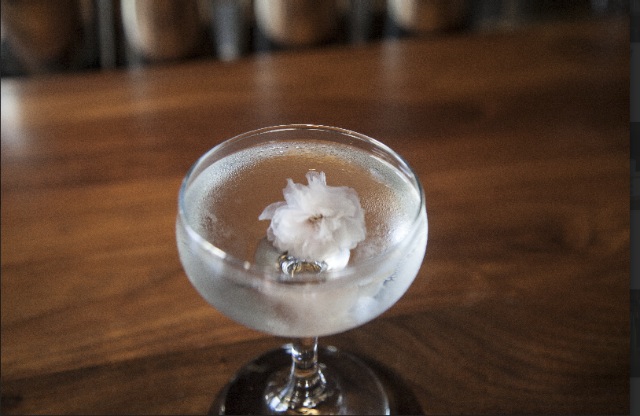 BAR GOTO Kenta Goto worked at Pegu Club for seven years before opening his Lower East spot, offering delicately flavored cocktails in a casual setting, just this summer. Bar Goto is essentially an izakaya, a casual Japanese pub and the savory Japanese pancakes called okonomiyaki are a must try. This is also a fool-proof first-date spot—filled with personal touches like a 100-year-old kimono that belonged to Goto's grandmother—where you could spend the evening lost in conversation. Like Kenta Goto himself, the drinks here are soft-spoken. Try the Sakura Martini, an updated take on the Saketini, made with gin rather than vodka, and featuring cedar cask-aged sake and a pickled cherry blossom. For a tipple with an energy boost, the Matcha Milk Punch delivers a boozy pick-me-up; it is a play on the classic crème de cacao-based Brandy Alexander, made with sencha-infused vodka and is a pleasant, vibrant green color. 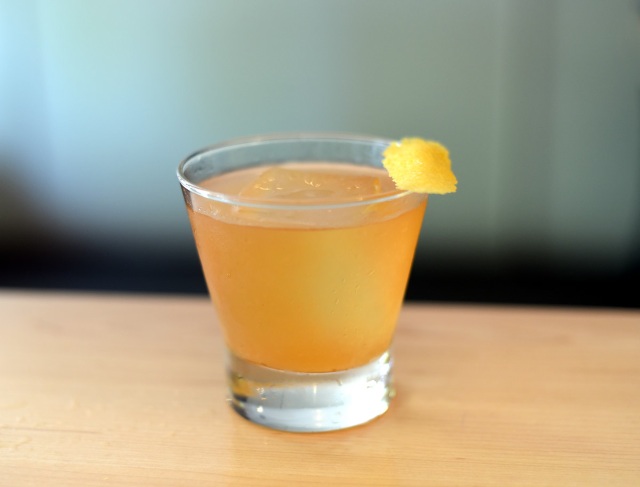 NETA Come to Neta for the superb contemporary Japanese cuisine, featuring a la carte sushi and composed dishes, as well as an extensive omakase, but don't miss the gorgeous cocktails. Head bartender Cole Schaffer intends his concoctions to bookend the meal, as aperitif and digestif. Sit down to a refreshing Lime and Yuzu Shaved Ice Shot, served with a cooling metal straw, before you begin your meal, and finish your dining experience with the Umi Ume, a slightly sweet shaken cocktail made with gin infused with cooked plum juice, accompanied by celery bitters and ginger, served in a coupe. Tucked away in a corner behind the sleek open kitchen, Schaffer is part of a scene that is eye-candy to any one who enjoys watching people work with true passion and care. But don't be deterred by the chef tweezering pea shoots onto sashimi; there will be '90s hip-hop at Neta and the staff puts you immediately at ease. 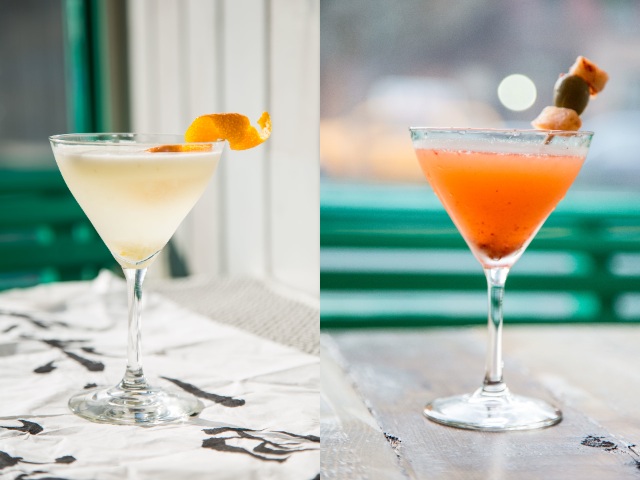 WHITE TIGER This new Prospect Heights spot is shaking up next-level Korean-inspired drinks that are fun on their own or paired with Chef Liz Kwon's comforting bowls of Dol Sot Bibimbap and Ramyun. If you adore a dirty martini, start with the Naughty Kimchi ($11), a salty-spicy combo made with Tito's, kimchi juice and garnished with a blue cheese-kimchi stuffed olive. For the sweet tooths, there's also the Straight Outta Gangnam ($12), which fortifies Korean cinnamon tea with bourbon, Averna, maple syrup, apple cider and lemon, a perfect remedy to the inevitable winter head cold. Unlike many of the city's cocktail bars, the atmosphere at White Tiger is more homey than highbrow, making it a great spot to casually drop in for a drink or three.