7 Places To Celebrate The Feast Of The Seven Fishes

Some of you, bless your hearts, are not lucky enough to have your own boisterous, aggressively adoring Italian-American family to host you on Christmas Eve for the Feast of the Seven Fishes, an Italian American tradition that calls upon you and your kinsmen to gorge yourselves on seafood, carbohydrates, and wine. While a few of us Italian-Americans will be retreating into the New Jersey nethervoid to celebrate, others (hopefully, you!) will be lucky enough to partake in the fishiest of holidays in the comfort of a renowned New York City Italian restaurant.

The origin of The Feast, also known as Vigalia ("The Vigil") is an arcane mystery. Perhaps it commemorates the seven sacraments or the seven days of creation. Perhaps it's some Kabbalistic secret that only Dan Brown has the key to. Origins aside, the purpose of the feast is to mark the Catholic tradition that prevents one from eating milk or meat on holy days or Fridays.

We've compiled a list of restaurants that will be offering up some classic or classically-inspired Feast of the Seven Fishes fare. Read on, Feast-goers and lovers of seafood alike!

Roman's: This rave-worthy Italian-inspired restaurant is offering up some classic Vigaliaspecials this Christmas Eve, including fried Baccala (salt cod) and a distinctly Italian-American Scungilli (large marine snails) bean salad. At $65/person, Roman's fixed price menu includes a diversity of seafood that will not fail to hit every note of your subaqueous cravings. A dependable and satisfying linguine with clams fortifies the middle of the meal, and an unspecified "whole roasted fish" seasoned with lemon and fennel brings up the rear. Located in Fort Greene, Roman's has often been named the best restaurant in the neighborhood, due partly to its consistently impressive cuisine and partly to its welcoming ambiance. Roman's is feasting exclusively on Christmas Eve, so hurry up and reserve soon! 243 Dekalb Ave, 718-622-5300

La Bottega: This comfortable and attractive Meatpacking District oasis is once again serving an eight course feast for $65/person, available through Christmas Eve. Chef Lucia Piscopo held a press preview earlier this month, and we were definitely impressed. Highlights of the massive meal include the Calamari e Fregula Sarda with sautéed calamari, fregula sarda, pine nuts, capers, currants, spicy tomato sauce; a Vongole al Forno (baked stuffed clams); and the Baccalà: pan seared cod, tomatoes, fennel and butter beans. Keep space in a second stomach for dessert, because the panettone bread pudding with zabaglione sauce is coming for you, and it's bringing egg nog and cannoli and cookies along for the ride. 369 West 16th Street; 212-243-8400

Take Root: Offering a five-shotVigalia special (18th-24th), Take Root's chef and owner Elise Kornack is throwing down some serious seafood this Christmas Eve. Squid with black garlic opens Take Root's five-course fixed tasting menu, which typically showcases seasonal favorites. At the climax of the meal is radish and local monkfish with turnip, pepita, and turmeric, an innovative take on an Italian classic. While the Feast here is definitely a bit of a splurge - $105/person - its five courses come with "edible surprises." Kornack, who grew up with the Feast, says that "The feast is not only about eating seven different fish; to me, as a chef, it's about taking a tradition and making it my own. I grew up eating fried smelts, anchovy, scungilli salad, and tomato braised squid, though as I got older, my mother and I got more creative in the ways we could interpret each dish." 187 Sackett Street, 347-227-7116 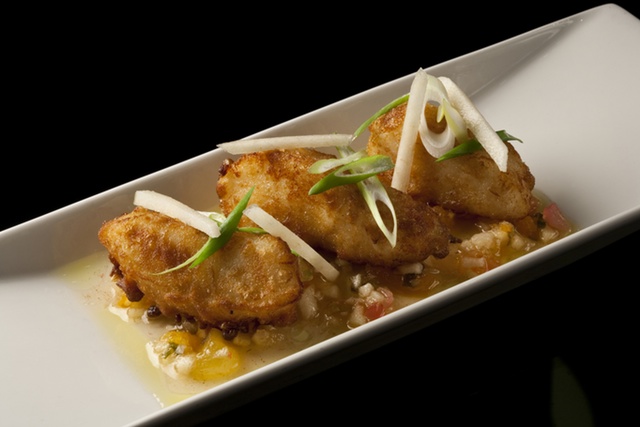 SD26: A modern Italian restaurant in the Flatiron district, SD26 is offering a contemporary take on the Feast of the Seven Fishes on the nights of the 23rd and the 24th. Salt cod fritters—and how do we love fritters— with Mostarda di Cremona, scallions and green apple stand out in their antipasto offerings as a surefire win. SD26's Fricelli with Prince Edward Island Mussels, Castelluccio Lentils and *buzzword* Fresh Kale Pesto will definitely satisfy your carb cravings while simultaneously satisfying your eat-kale-forever compulsion. Finally, a mixed seafood grill and Cacciucco make up the main courses. SD26 stands out from the rest of the Vigalia hubs because of its traditional, though strangely absent elsewhere, Italian "Yule Log" dessert. All of this, in your mouth, for $90/person. 19 E 26th St, 212-265-5959

Itrulli: For $72 a person, Murray Hill's Itrulli offers a wide variety of options for each of its Feast's four courses. The appetizer selection includes granchio ("peeky toe crab meat cocktail"), a seafood salad, wood-oven roasted oysters, and a fritto misto. Four seafood-based pasta dishes follow for you to unabashadly gorge yourself on before you can devour your choice of cod, monkfish, bass, or swordfish. Just as wide-ranging as their dishes, their Feast's duration is from the 18th-24th. 122 East 27th St, 212-481-7372

Sirio: The fanciest place for a fishy feast in Manhattan on Christmas Eve or Christmas Day is probably at this swank Italian restaurant off the lobby of the opulent Pierre Hotel. On the 24th and 25th, Sirio is offering a four course meal for $95 per person. There are a number of options to choose from for each course, ranging from a pan seared sardines with black trumpet mushrooms and Parmesan foam to seared wild striped bass with green peas and cuttlefish sauce. And the Seared Maine Sea Scallops with Sunchoke Puree, Crispy Sweetbreads, Chanterelle Mushrooms, and Veal Jus also has us writing a letter to Santa requesting a fat roll of cash in our stockings. How about tens and twenties? Peruse the full menu on their website. 795 Fifth Avenue, 212-940-8195

Lincoln Ristorante:Committed to locally-sourced ingredients, the UWS's Lincoln Ristorante is offering a Vigalia spread that could only be described as classy as all hell between the 18th and the 24th. Seven courses, each one as nuanced and considered as the last, correspond to the number of fishies we celebrate this day. The Capesante in Padella (pan-fried scallops) in a cauliflower puree with brown butter and hazelnuts jumps out from the menu. As the main corse, cobia, the "pork chop of the sea," is prepared with oyster mushrooms and an "arugula pudding." In proper Italian-American style, the top of the menu reads, "REQUIRES THE PARTICIPATION OF THE ENTIRE TABLE," though I doubt anyone would need to be egged on to eat these delights, due both to their tastiness and the $85/person pricetag on the meal. 142 W 65th St, 212-359-6500