7 Outrageous Doughnuts You Must Try In NYC

We love our doughnuts in this city, whether yeast or cake, vegan or not—just don't make them low fat. Today, a celebration of those doughnuts taking the city's game to the next level; the kind of doughnuts that are (almost) too beautiful to eat. Tell us where your favorite Instagram-worthy creations are to be found. 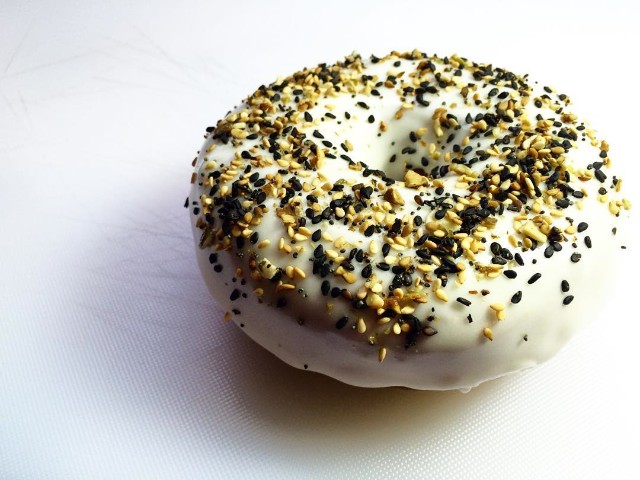 There's no option to leave this Astoria restaurant anything other than pants-busting full, especially if a Sunday brunch excursion includes one of the insane donuts they're making courtesy of Donut Diva Montana D'Alessio. Order the Lucky Charms Donut ($4.50) and you'll be presented with a cake doughnut dripping with a sticky marshmallow cream glaze, into which bits of Lucky Charms cereal—regular bits included!—have been pressed. The crowning jewel on many of their donut offerings: a donut hole, similarly adorned, nesting on top of the donut itself.

GOLDEN CRISTAL UBE DONUT FROM MANILLA SOCIAL CLUB Ube, purple yam, serves as a humble base for what is arguably NYC's least humble donut. The Filipino resaurant in Williamsburg that serves these $100 beauties touts the "combination" of the "honey" notes of Cristal complementing the ube, which in turns go well with the 24-karat gold that lacquers the pastry. Plus, they'll only charge you $1,000 if you order a dozen; what a deal!

MAPLE WAFFLE DONUT FROM UNDERWEST DONUTS The only donut shop located inside a car wash is also serving one of the best new donuts around with their Maple Waffle offering ($3). Per Quick Bites columnist Scott Lynch: "Moist, sugary-glazed and evocative of my childhood visits to Southern Vermont, topped with crisp crumbles of stroopwafel, this little beauty would add an unacceptable amount of calories to my week if it were more readily accessible." Sold.

After over half a century in Bay Ridge, Leske's has firmly established itself in the culinary fabric of the neighborhood. They're beloved for their black and white cookies, their Kringlers and pecan rings and, of course, their Maple Glazed Bacon Doughnuts ($1.75). Pillowy yeast doughnuts are topped with a sweet maple glaze that accentuates the smokiness of the bounty of bacon bits on top. Bacon on doughnuts isn't a newfangled creation, but Leske's is making one of the best versions in NYC and beyond.

NORBERWEIBERBERWEIBERHYDRAFAB AT CINNAMON SNAIL A tip of the hat to anyone who tries to pronounce this insane vegan creation from the doughnut and wallaby enthusiasts at the Cinnamon Snail. This cruelty-free little creature is glazed with white chocolate, topped with dirty blonde streusel and stuffed to the brim with Makers Mark bourbon hazelnut ganache. Yes, there is bourbon in that doughnut.

The Cinnamon Snail is located at The Pennsy, 2 Penn Plaza; website

THE EVERYTHING FROM GOSSIP COFFEE Everything here doesn't refer to bagel seasonings but rather the little bit of everything (glazes, toppings, etc.) that chef Scottish Francis (aka Francis Legge) has lying around the kitchen. They only offer this beautiful mess ($4.50) on Sundays, but offer other flavors like Orange Creamsicle and Prosciutto Guiness all the time.

#donuts
#doughnuts
#unique doughnuts
#original
Do you know the scoop? Comment below or Send us a Tip