6 Festive Cocktails To Usher In Autumn

What we lack in spectacular foliage we more than make up for in proximity to and volume of wonderful cocktail bars, many of which note the changing seasons by revamping their menus to fit the weather. With fall, you'll find plenty of brown liquors, apple flavors, spices and other such offerings, though there's not a wrong season to drink any of the spirits. Below, a few offerings befitting an autumn eve out on the town; we promise no decorative gourds.

Chic Upper East Side steakhouse Arlington Club has an eponymous cocktail on offer this season that they call a variation on a Negroni. Instead of gin, Beverage Director Keith Nelson substitutes Woodford Reserve bourbon, mixing it with Carpano Antica, a type of sweet vermouth, and blood-red Italian liqueur Campari. The $15 cocktail is served with one satisfyingly huge ice cube and a twist of orange peel.

Maybe I'm a sucker for anything related to the Greatest Board Game Ever, but Ward III in Tribeca's Colonel Mustard in the Library sounds like the perfect drink to accompany a rousing game of Clue. The brandy-based drink gets a fruit-and-nut infusion courtesy of walnut liqueur and smoked Luxardo Cherries. The sweetness of the drink gets tapered with Punt e Mes, a bitter Italian type of Vermouth. If you embrace sweetness, try their Harvest Moon, made with Highland Scotch, Allspice Dram, pumpkin cordial and ginger. 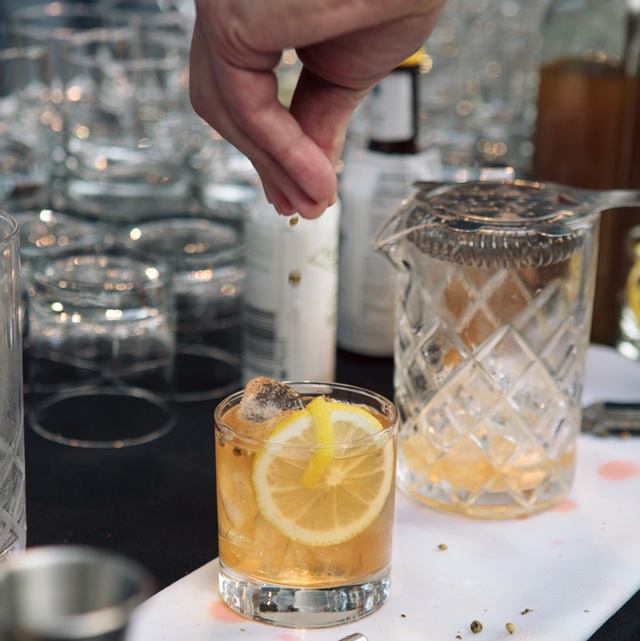 FiDi newcomer Cedar Local is playing around with vodka as well, using Big Cat-saving Snow Leopard vodka to make a complex, off-beat drink called Elevated Outcrop. To the vodka, Bathtub Gin's John McCarthy adds Zirbenz Stone Pine Liqueur (an Austrian spirit that channels the coniferous tree) and Suze Saveur d'Autrefois (a floral French liqueur) with a coriander and green peppercorn syrup and two types of bitters. They further punch up this already heady cocktail, mixologists add a wheel of lemon, an extra lemon peel and more freshly cracked coriander and green peppercorns on top. Not for the faint of heart!

Why settle for one autumnal trope when you can have two? That must be the philosophy behind the Village's Margaux, who've upped the ante with a cocktail featuring both apples and pumpkins. The Harvest Shandy ($14) features Laird's Bonded Branded shaken with bitter Cynar, almondy Velvet Falernum and a dose of seasonal fun with both apple cider and a pumpkin ale.

Over at Grand Central Terminal, stately bar The Campbell Apartment also goes the way of the gourd, using it as a refresher to its classic Pumpkin Old Fashioned. Bartenders use Bulleit Bourbon infused with pumpkin and cinnamon, adding a simple syrup, Angostura bitters and some muddled oranges and cherries to create the updated cocktail, which they'll serve on the rocks. Although it might sound fun, muddling pumpkins would probably be a bit too mushy.

We're fans of anything that'll give you a buzz and fill your tummy, which is why the Midnight Snack from Experimental Cocktail Club has us scheduling plans to visit the Chrystie Street bar ASAP. This drink combines Bittermen's New Orleans Coffee liqueur with both Bulleit Bourbon and Tawny Port, then sweetened with orgeat (read: floral almond) syrup and fortified with a whole egg. But that's not even the snack element! The cocktail is also served with a butter cookie, just as it should be.