I came late to the rice cakes game. When folks were obsessing about David Chang's
interpretation, I figured he'd jumped the shark. I mean, how could anyone—even a lauded chef like Chang—make those crunchy, inedible cardboard discs taste good? Turns out—I'm an idiot.

We're not talking about those rice cakes, we're talking about sticky rice smoothed-out and formed into different shapes, sizes and textures. Now, I'm a rice man when it comes to my carbs, not a noodle man, so this sounded right up my alley. Since my initiation into this Asian staple, I've made it a point to order rice cakes whenever they're on the menu.

Apologies to David Chang, but the rice cake to end all rice cakes can be found at Hanjan,
Sooni Kim's second hot spot after his smashing Midtown success, Danji. Although there are many reasons to visit the mini-restaurant row that is 26th Street between 6th and Broadway, (Hill Country Barbecue, Maysville) it's these cakes that are the strip's main attraction for me. These ddukbokki ($13) are cooked in pork fat and come with little discs of fish cake, sublime strings of chili and a perfectly soft-boiled egg to mix into the mess. It's spicy, dense, funky and satisfying and a perfect hangover cure. Best of all, you don't have to slather them in peanut butter! 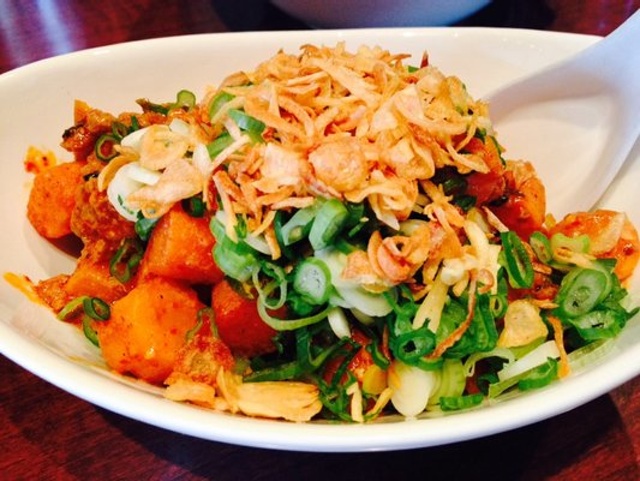 David Chang has a habit of taking something simple that already existed and introducing it to the American palate, maxing-out the flavors. He's sort of like Led Zeppelin to The Blues: he didn't invent it, but his flavors are so amped up they're irresistible. The spicy rice cakes at Momofuku Ssam Bar are hearty, full of a slow-building spice that really gets to you by the end. It's a generous portion and the cakes are shaped more like square gnocchi, with a similar texture. Occasionally the cakes can get a bit gummy, but still, it's an immensely good bowl of RCs, with little bits of sausage and some crunchies thrown in for good measure. 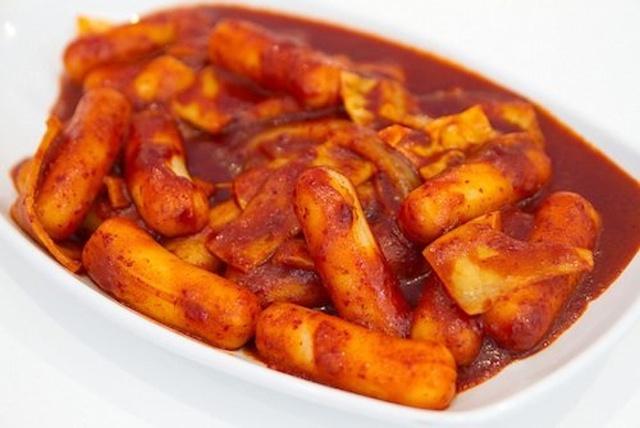 Chang's and Kim's cakes are the gold standard in this town, but this is street food, so let's get down off our high horse and head to the Koreatown food court. Advertised as "Korean School Food," The Gochujang stall located in Food Gallery 32 serves up as comforting a bowl of Ddukbokki as you're likely to find. Served in a lightly spiced red sauce, these rice cakes are cylindrical, mixed with chunks of fish cake and a very hard boiled egg. There are a few add-on possibilities, but you want the kimmari, fried seaweed rolls. It's a party of textures that hits the spot on a cold night, and it's served in massive portions for the ridiculous price of $7.

Sure, you could grab some chicken or Matzoh ball soup the next time you're under the
weather, but my favorite comfort soup is the Tteok Manduguk ($8.95), from H.I.T. Korean Deli.
Hidden in the back of the lobby of an anonymous commercial building in the flower district,
this tiny spot serves up Korean specialties for the new media-focused Upper Chelsea set who are a bit too lazy to schlep to Koreatown. The soup is a clear, chicken-based broth, with egg, onion, scallion, carrots, cabbage, veggie dumplings and rice cakes. The cakes are of the flat, disc-shaped variety and soak up the garlicky chicken broth nicely. 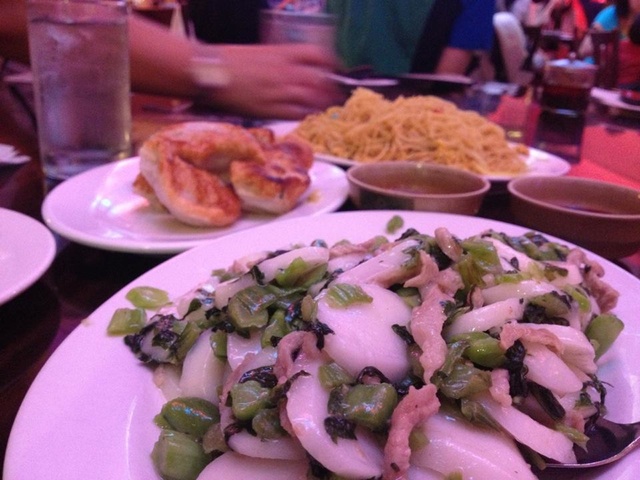 It's surprisingly hard to find good rice cakes in Chinatown, so it came as a pleasant shock to see that Shanghai Cafe actually has a section on their menu devoted to them. You can have
them all kinds of ways; with black mushrooms, with shrimp, with beef, etc. My favorite are rice cakes with shredded pork and preserved cabbage ($4.95). The pork is lean and tender and the cabbage adds a hint of pleasing bitterness to contrast with the slightly sweet brown glaze that covers it all.

Dan Siegler is a native New Yorker. He hates the mouthfeel of ceramic, so he drinks his tea out of a paper cup. He writes record reviews, has been working on a screenplay for fourteen years and is currently compiling a list of the 10 worst 10 best lists. He is a music producer, a Bessie Award winning composer of strange electronic scores and is the owner/operator of Saturnfoot Studios.