5 Places To Dine In Midtown That Don't Suck

Ever go to Radio City Music Hall or MoMA or wherever in that area of Midtown for an event, and have no idea where to grab some decent food beforehand? We're here to help. 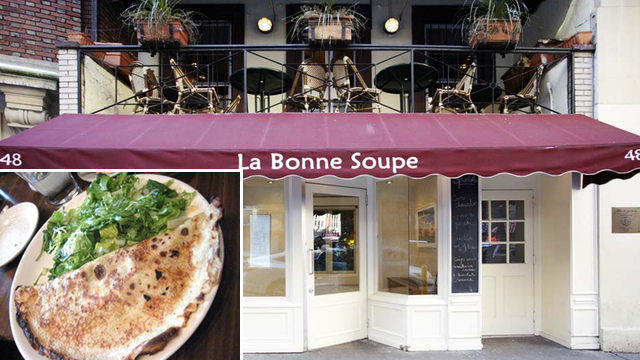 This place is a treasure! The two-story restaurant has plenty of space, and even an outdoor terrace where you can look over the street. The staff is friendly, the service is quick, and the food is good. They also pair up your meals with other items for nice little deals—the $19.99 soup deal comes with a medium size bowl of soup, a basket of bread and butter, salad, dessert, and a beverage (house wine, beer, soda or coffee). While the food isn't something you'll end up dreaming about, this place is a haven in Midtown... and the leeks and goat cheese crepe will melt in your mouth! 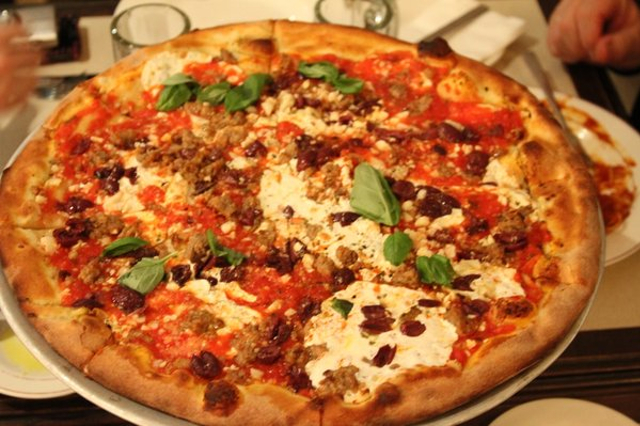 If you're looking for something beyond the dollar slice, and Italian more authentic than Olive Garden, head to Angelo's. The restaurant (which has two locations) has everything from fried calamari to your classic red sauce pasta dishes to pizzas and cannolis. Since the focus is on pizza, stick with that—one Yelper describes it: "Their crust was crunchy and slightly soft in the center, cheese was perfectly melted, and the toppings were all good." Here's the full menu. 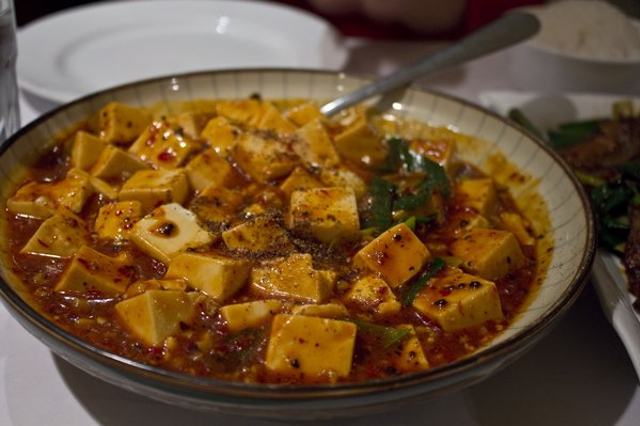 Here you'll find everything from Ox Tongue to Diced Rabbit, and that's just the appetizers. The Chinese restaurant has a long menu, which also has plenty to offer for vegetarians. It comes recommended highly to us by two trusted friends, one of whom says: "You want the double-cooked pork belly with leeks." Here's the full menu. 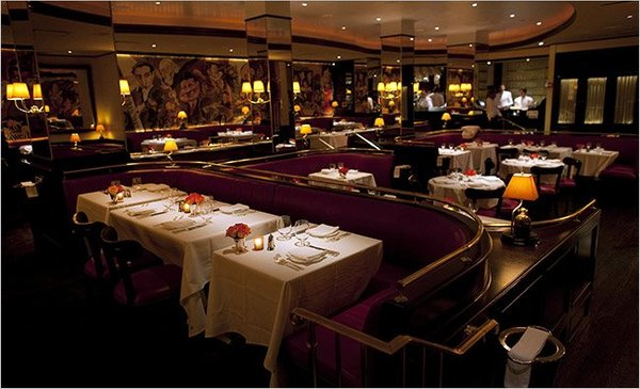 The dining room at Monkey Bar (via Yelp)

This place is pricey, especially the drinks (which start at $16!)... but it's a nice splurge, and the history and atmosphere of this classic New York City institution will make it all worth it. The piano bar sits inside of the Elysée Hotel (where Tennessee Williams fatally swallowed a cap) and originally opened "in the depths of the Great Depression" as a four-stool bar. Throughout time its expanded, transformed, and seen plenty of famous faces like Dorothy Parker, Marlon Brando, Joe DiMaggio, Tallulah Bankhead, and the aforementioned Williams. These days its owned by Graydon Carter, who has done a great job at keeping its classic look and feel up. There are pay phones in the entrance way, old television sets where you'd normally find a flat screen, and vintage TV shows and tunes lingering in the air. You'll find everything from Lobster Bisque ($14) to Caviar ($95) to a Cheeseburger ($22) on the menu. 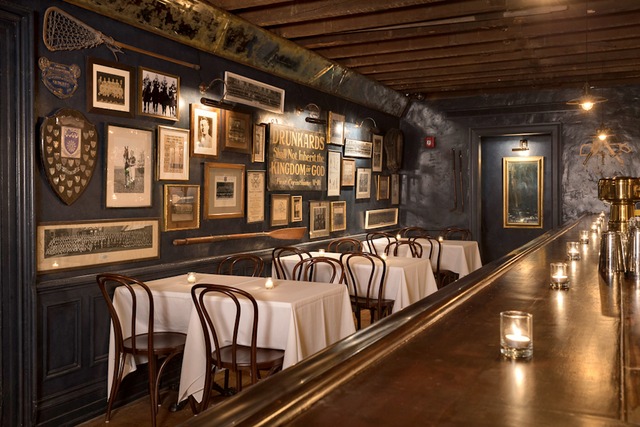 There was considerable uproar when the beloved midtown restaurant and piano bar Bill's Gay Nineties closed last year; the joint had been open since 1924 and seemed frozen in time, replete with a false brick wall in the basement that hid booze during Prohibition. After the building's owner refused to renegotiate the lease with restaurant owner Barbara Bart Olmsted, whose father bought Bill's from the original owner, it was snatched up by Crown Group Hospitality, which also operates The Lion, from Chef John DeLucie (Waverly Inn).

Fortunately, co-owner Sean Largotta has a light touch, and many of old regulars have been won over with the new iteration, simply called Bill's Food & Drink. Most of the atavistic details and photos have been lovingly restored, the usual piano player is back in action, and boozy sing-a-longs break out nightly. Behind the bar you'll find the legendary Doug Quinn, renowned for his incredible ability to remember what your drink is—even if you yourself don't remember ordering it. (Quinn was the longtime bartender at PJ Clarke's until he was fired for tossing a groper out of the bar.)

There's a beautiful dining room upstairs that feels considerably more formal; depending on your mood, you may prefer the more casual and convivial downstairs bar, which also serves a full dinner menu. If you don't want to sit at the bar, we recommend taking a table by the front, where the doors are flung open in warm weather and you're not far from the piano player. The drinks are certainly stiff, and while food prices aren't Prohibition-era, the quality is high. You'll get your money's worth with chef Jason Hall's big Manhattan Shellfish Chowder with Jumbo Prawns, Oyster Crackers and Saffron. It's $32, but it's enough to share—and anyway it's still midtown; look at it like you're on vacation.—John Del Signore