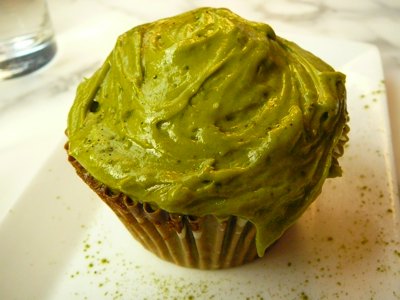 It might have been more than a little symbolic last week when the huge, pink-frosted gyroscopic cupcake towering over 23rd Street restaurant Burgers and Cupcakes came to the end of its last full spin. Meant to be a proud beacon of sugar, the giant baked good was instead an embattled neighborhood fixture from the start; many were happy to see it go. And it’s gone: writer James Wagner shares one rumor relating the cupcake’s possible fate: that an anonymous buyer took the thing off the owners’ hands for $400.

For those left looking for signs (pun intended), The Night The Cupcake Went Out has to be a harbinger of events-to-come on a citywide scale. Enter the green tea cupcake (left) served at chef Josh DeChellis’s tempura restaurant BarFry. It’s not guacamole you see here besmirching the upper crust of this paper wrapped snack; it’s frosting made with matcha powdered green tea, which also liberally doses the batter. The result is the most intense cupcake you’re likely to eat for a while, aromatic and crumbly, not too sweet, strong and clean-flavored, made possible by some skillful culinary engineering on De Chellis's part. Served on a matcha dusted plate at BarFry, the cupcake is a study in green: the kind of snack a stay at home Incredible Hulk would send off to the school bus in dozens if his kid were having an in-class birthday party. Sure, at $5 per pop, this cupcake is a little pricey. But with the caffeine quotient, think of it as an after-dinner drink and dessert in one small package. It’s also some $395 cheaper than one giant and pink, now perhaps waiting to spin somewhere else.