4 Fusion Recipes For Your Thanksgivukkah Table

We've officially entered "eating season," where each week seemingly brings a new excuse to binge on hearty comfort foods. This year marks a special, once in thousands of years event poised to blow holiday revelers straight into the next pant size: Thanksgiving and Hannukkah happening simultaneously. Thanksgivukkah, as the Franken-holiday has been dubbed, falls on November 28th, of course, which also happens to be the first full day of the Jewish festival of lights. It was 1888 the last time the two holidays converged and it'll be another 77,798 years before anyone will spin the dreidel over a plate of turkey.

While each holiday has its own signature dishes, a few tweaks can put a Jewish spin on Thanksgiving or vice versa. Even if you aren't one of God's Chosen People, nobody needs an excuse to put more food on the table. 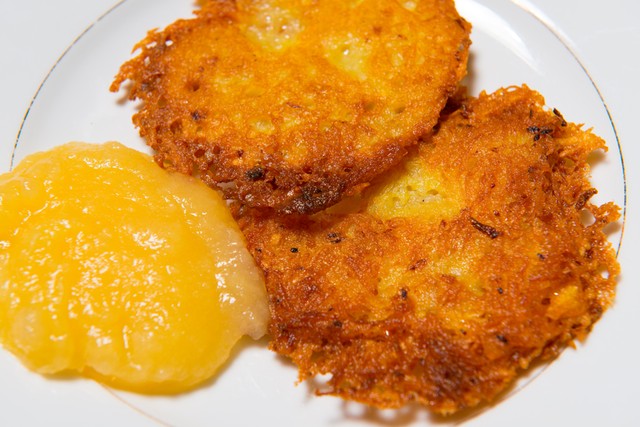 Sweet Potato Latkes A Hannukkah table always come stocked with delicious fried potato latkes while sweet potatoes are a common sighting around the Thanksgiving spread. Combine the two for a fusion dish that's both a quintessential Jewish treat as well as a nod to the season's harvest with this simple recipe from Epicurious.

Heat oil in a deep 12-inch nonstick skillet over moderately high heat until hot but not smoking. Working in batches of 4, spoon 1/8 cup potato mixture per latke into oil and flatten to 3-inch diameter with a slotted spatula. Reduce heat to moderate and cook until golden, about 1 1/2 minutes on each side. Transfer latkes with spatula to paper towels to drain.

[Ed. note: Tradition calls for apple sauce, but since sweet potatoes are, obvi, already sweet, I'd recommend sour cream or plain greek yogurt with some additional chopped scallion or chives] 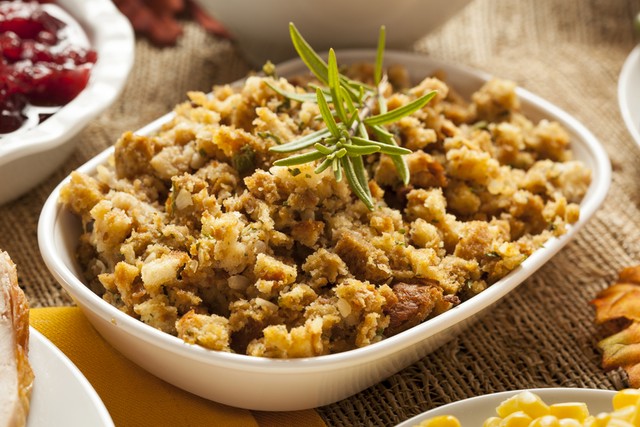 Challah Bread Stuffing Nix the day-old corn bread or the prepackaged bread bits and grab a loaf of beautifully braided-and-lacquered challah bread. It's got an inherent sweetness, which pairs perfectly with savory additions like sage, sausage, cranberry and onion.

Coat the bottom of a large pan with olive oil over medium heat and toss in the sausage crumbles. When they're nicely browned, remove to a paper towel-lined plate and set aside. In the same pan, add onions and celery. When they're softened, add the cranberries, sage, thyme and chicken stock.

While the vegetables are cooking, cut the Challah into chunks and set aside in a large bowl.

When vegetables are softened and cranberries starting to plump, add the vegetable mixture and the pecans into the Challah. Stir to combine. At this point, if the bread seems dry, add some extra chicken stock, keeping in mind that it will continue to dry up in the oven.

Place the mixture into a large, butter-greased baking dish. Dot the top with the butter and bake for 30 - 45 minutes. 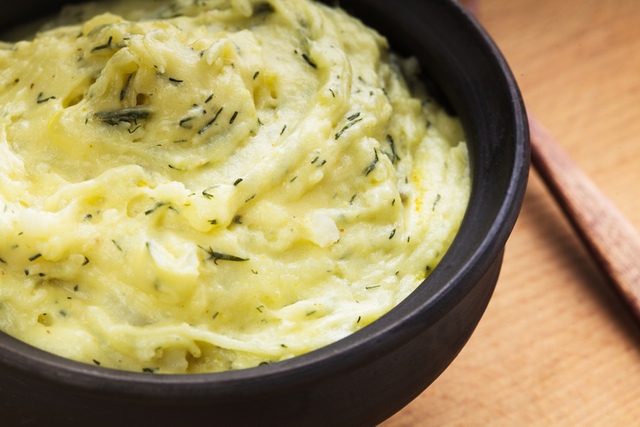 Horseradish Mashed Potatoes Add some extra heat to the —let's be honest—sometimes boring mashed potato side. Prepared horseradish doesn't have that super nasal bite like wasabi but it'll definitely perk up your sinuses if you add too much, so keep a steady hand if you don't want to blow your WASPy relatives out of the water.

Bring a large pot of water to boil and add lots of salt. Cook potatoes until fork tender, which could be 15 minutes to 30 minutes depending on the size of the chunks and the variety of potato.

Drain the potatoes and return to the cooking pot. Immediately add the butter and sour cream and begin mashing. If the potato mixture still seems chunky and dry, start adding in some of the milk/buttermilk and continue mashing.

When you've achieved the desired consistency, add in the horseradish, salt and pepper. Taste as you go until you get the desired flavor. Garnish with chopped chive. 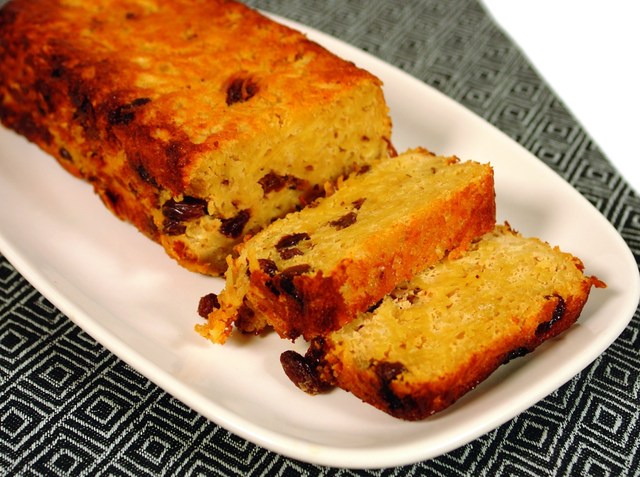 Butternut Squash Kugel Like the latke, kugel is a staple of the Hanukkah spread. Add some harvest ingredients to make it a perfect fit for extra starch on the Thanksgiving table. Recipe via All Recipes.

Preheat oven to 350 degrees and butter one baking dish and a 9 x 13-inch baking dish.

Bake the butter squash on the prepared baking sheet, cut side down, in the preheated oven until tender, about 50 minutes.

Meanwhile, heat the olive oil over medium heat and add the onions, cooking until softened. Then turn down the heat to low and cook onions, stirring frequently, until the onions are caramelized (dark brown).

Beat the eggs and whites in a large bowl then stir in noodles and onions. Scoop out the flesh of the squash and add to the noodles. Season the mixture with the rosemary, sage, salt and pepper and then pour into the baking dish. Top with chopped pecans.

Bake until golden brown, around 30 minutes.

#Hanukkah
#recipes
#thanksgiving
#Thanksgivukkah
Do you know the scoop? Comment below or Send us a Tip