4 Food Events To Round Out Your Weekend

We all know that the body needs some extra help digesting, especially after an enormous meal like the one we all gorged on yesterday. Give your insides a little push on Saturday at the New York Public Library's That's Fermentation! lecture, where you'll learn the history and science behind kimchee and other fermented Asian foods, which are said to be excellent following a large meal. Kimcheelicious founder Antonio Limauco knows the ins and outs of these unctuous foodstuffs, so get ready for an exploration of why these foods were created followed by a free kimchee tasting.

Smorgasburg and the Brooklyn Fleadebut their new digs this Saturday and Sunday with a pop-up meat stand from Pat La Frieda, a new Frankenpastry called The Bruffin and dozens of other hot and prepared foods—because that's just what you need, isn't it? Grab a cup from Salud's Mexican hot chocolate bar while you're browsing for the perfect artisanal scarf for your sustainable holiday gift swap or just go to town on a Ramen Burger—no judgements! The market stays open 10 a.m. to 7 p.m., plenty of time to take in the 200 vendors scheduled to attend. 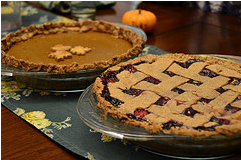 There's no such thing as too much pie, so head over to Jimmy's No. 43 this Sunday, where they're hosting the first in a series of pop-up events starting with America's most patriotic dessert. The Pop-Up Pie Tasting brings submissions from amateurs and professionals with fillings of both the sweet and savory persuasion. The pie eating also doubles as a fundraiser for Food Systems NYC, which seeks to make access to nourishing and affordable food attainable for everyone. $10 at the door gets you access to the flaky treats; Jimmy's regular bar and restaurant menu are also available should you want it.

Champagnes and sparking wines are a decidedly highbrow indulgence, so there's something intriguing about the thought of pairing delicious bubbly with the lowly potato chip. "The crisp acidity of sparkling wine cuts right through the oiliness of the chips while the wine's lush toastiness and fruit tones pair beautifully with the salty crisps," according to the Astor Center, who are putting that theory to the test on Sunday at their Fizz & Chips tasting event. They're pairing 16 fizzies with a wide range of potato chips—even salt and vinegar! If you'd like a more in-depth look at sparking wines, try on one of their champagne/alternative seminars, which include admission to the walk around tasting.

#weekend food events
#weekend food roundup
#what to eat this weekend
#original
Do you know the scoop? Comment below or Send us a Tip