The horrible trend of classic NYC diners closing continues with news that Cup & Saucer on the border of the Lower East Side and Chinatown will serve its last Greek omelette. The Lo-Down reports the diner's last day will be July 17th but an employee at the diner told Gothamist it would remain open until the end of July.

The diner, located at 89 Canal Street, has been run by John Vasilopoulos and Nick Castanos since 1988, when they purchased the Jewish diner of the same name that had been in operation since 1940. In 2013, owners worried that a recent sale of the building would lead to a rent increase and it seems their fears have been realized: a new asking rent is $15,000 per month including real estate taxes, according to The Lo-Down.

We've thus far been unable to confirm the previous rent with the owners, but a rent hike of this amount wouldn't be surprising considering the type of high end establishments—including fancy diners!—beginning to open in this part of Manhattan. 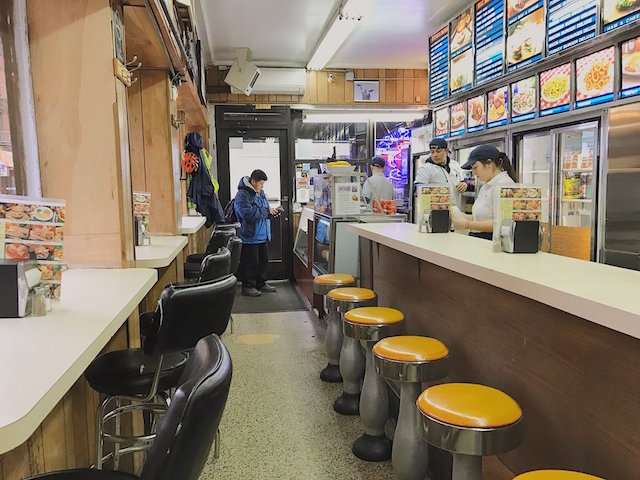 "It's a tiny diner on this pedal to the metal, traffic-choked pollution-producing boulevard between the Manhattan Bridge and the Holland Tunnel, a way station for truckers, delivery men, local shopkeepers, Canal Street bargain hunters, and loutish layabouts like me," Forgotten NY wrote in 2014.

Cup & Saucer was recently included in a roundup of the city's best diners by Grub Street.

In case you don't get the opportunity to visit before the diner closes, live the experience through this contented (spoiler alert) pancake-eater:

#cup and saucer
#LES
#Lower East Side
#RIP
Do you know the scoop? Comment below or Send us a Tip