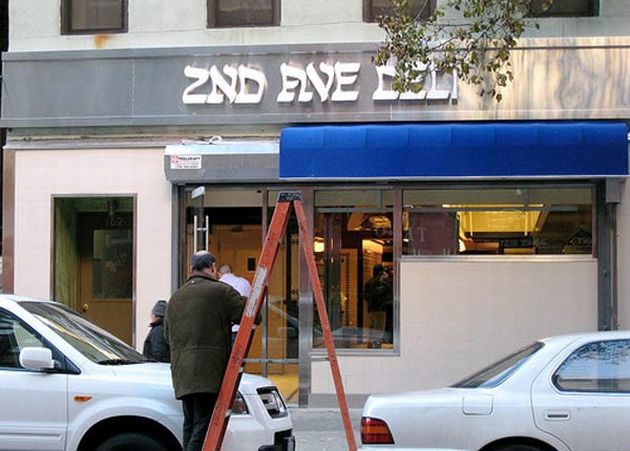 Good news for old-school New Yorkers: the new 2nd Ave Delicatessen is expected to open sometime next week in its new Murray Hill Location on 33rd Street, near Third Avenue. Lovers of the deli’s famous matzo ball soup and pastrami sandwiches were devastated last year when, after a half-century in business, the 2nd Ave and 10th Street legend was snuffed out. The closure came in the wake of a bitter rent dispute between deli owner Jack Lebewohl and the landlord over rent increases; the soul was promptly siphoned from the site and turned into a Chase bank (though the Yiddish theater “Walk of Fame” on the sidewalk remains).

This week’s New York Magazine has an interview with new owner Jeremy Lebewohl, 25-year-old nephew to the original owner Abe Lebewohl who was tragically slain in a still-unsolved 1996 robbery at the old location. The new owner assures loyalists that he has subtracted nothing from the menu, but will be adding some new deli meats. And he’s decidedly unfazed by the trans fat ban taking over New York:

If you go to a lot of in-vogue restaurants, you’re going to see pork belly, and barbecue is back in a big way. Food tastes move in cycles. When I was a kid, in my house, in all my friends’ houses, there were all kinds of cookies and Entenmann’s cake and bags of potato chips... Then all of a sudden, God forbid you eat anything but a Diet Coke and maybe a crouton if you’re lucky. That’s not the way to live.

Lebewohl also promises that he will be “pushing” the gribenes – deep fried chicken skins with onions – as something for diners to nosh on as soon as they sit down. Though the opening is reportedly the 17th, that date is not set in stone; we called the deli this morning and were told that it will “hopefully” be open sometime next week.