A hallmark of every over-hyped summer festival is a strictly enforced caste system that distills American class and privilege down to a laminated badge or a special colored wristband. This weekend's Great Googa Mooga was no different, and those who paid $249.50 (plus a service charge of $17.71) to be vaulted into the "Extra Mooga" VIP section were promised shelter from the flip-flopped barbarians and enough sustenance to keep cackling at them long into the evening. So was it worth it?

Initially all the "Extras" seemed present: cooking tutorials, ample eating space (drenched in shade denied the barbarians beyond the gates), cute children wearing expensive clothing tripping over tree roots, beefy security guys keeping out Whiny Polo Shirt Guy and his girlfriend while giving you a knowing nod with a flash of your wrist. And the massive beers were twice the size of the lukewarm, $7 abominations the Normals waited over an hour in line for. 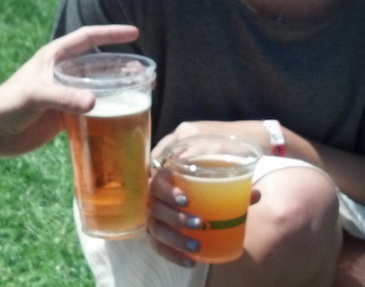 Around noon, we overheard a human being say this in the Extra Mooga section: "This is God smiling upon us telling us we're doing things right!" But it turns out the Mooga God is a wrathful god.

As tens of thousands of people poured into the park, the lines became too long to be associated with a VIP experience—the one for Umami Burger almost stretched down into the two Lexuses (Lexii?) on display next to the Lullwater pond. Where were the "heaping plates" of food, as promised on the event's website? We waited 15 minutes for a bite of a mortadella hot dog from a restaurant in Philly, and another 15 for a single piece of beef with some corn. Our vegetarian colleagues hovered nervously around us.

One approached a line monitor with an innocent question: "Is there anything for vegetarians back here?" He laughed. "70 people must have asked me that question. And the answer is, not that I know of. I'm vegetarian too, and I'm probably going to be working here until 11 p.m. without eating anything." Defeated, the vegetarians ended up waiting 45 minutes in line for two vegetarian $9 pupusas in the general admission section. Here's what the lines looked like out there:

So there weren't any vegetarian options, but somehow a capuchin monkey was produced at the Boathouse. A tipsy woman began scolding the man who was attempting to place a hat on the monkey. "Don't put a hat on him, that's enslavement!" 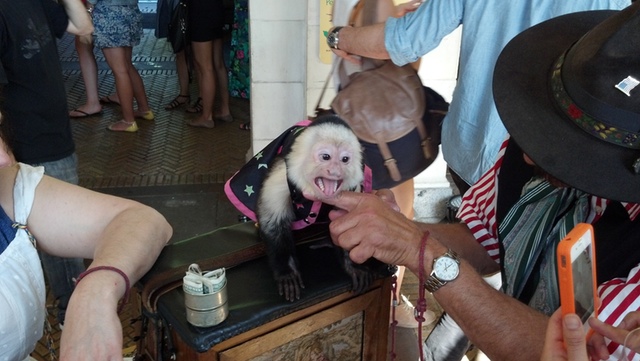 Even the monkey was hungry! (John Del Signore/Gothamist)

Later, we asked another woman how she was enjoying her $250 Extra Mooga experience. "They promised us heaping piles of food," said Gillian, who would only give her first name. "Well, there's definitely heaping piles of something. Why am I still hungry at a food festival?"

Nearby, we found a discarded gift bag that was given to Extra Mooga buyers. It contained a pair of cheap sunglasses, a plastic wine glass, and "$1,000 towards your next Lexus purchase." None of those items were edible, but the guy they paid to stand next to the display cars was teasing us with his extremely supple arms. 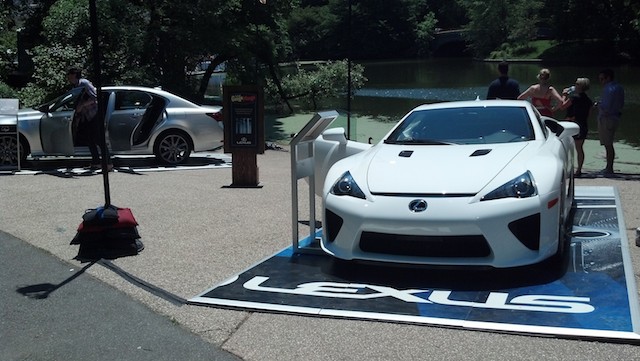 Two hours before the Extra Mooga section ran out of bites entirely, and the taps poured nothing but sad cider, Aziz Ansari, James Murphy, David Chang, and Ruth Reichl began a panel "discussion." But it probably should have been called: "Watch celebrities eat food that you can't have." These people had paid for their own torture. Ansari's lips were glistening with grease as he mumbled, "This is really good!" before taking another bite out of a chicken leg and literally moaning with ecstasy.

James Murphy, with his beard that bleeds down into his neck and chest, looked like a regal and satisfied Maurice Sendak monster. He laughed and picked his teeth as someone joked about something only the four of them thought was funny. No one thought to ask them for any food. 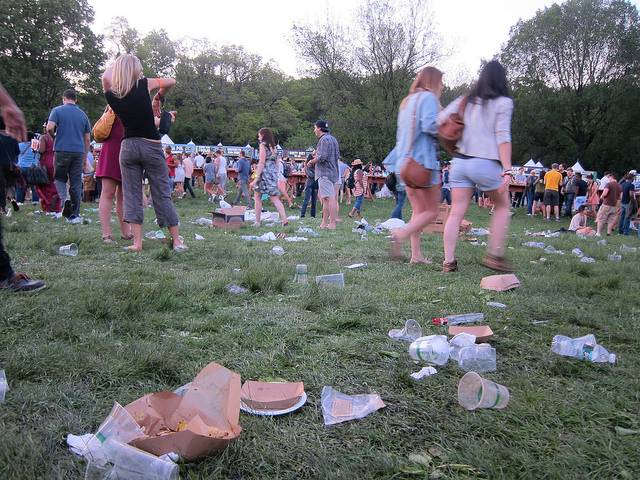 Did you pay for Extra Mooga? Did you think it was a "shitshow?"

John Del Signore & Jen Carlson contributed to this report, and have yet to renounce their vegetarian lifestyles.