Dive into Gothamist Getaways, where we bring you stories about travel, food, new products and handy tips for making your trips—both near and far—more enjoyable. So kick back, dream about your next journey, and let us know if you have any hints for us—email travel@gothamist.com.

Street food is the hallmark of Taiwanese dining and night markets are the quintessential Taiwanese experience (though New York is getting a taste for them). Operated every evening, night markets are where locals and tourists alike congregate for snappy and filling bites. 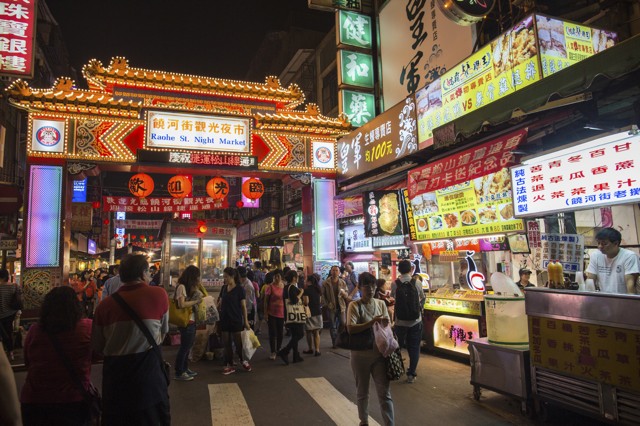 A night market in Taipei (r-monochrome/Istockphoto)

The Taiwanese night market can be found in most cities throughout the country, though we recommend Taipei for variety and quality. Vendors show up weekly to push their specialized fare and dotted on the side are stalls where you can buy cell phone accessories or try your hand at rows of claw machines.

As for the food, the cuisine is heavy on offal and seafood but the selections are far from static. You'll see a bit of a Japanese influence here and there and in recent years, Western fusion elements have been incorporated as well.

When you talk night markets in Taiwan, stinky tofu is an unavoidable subject. (Mostly because you can smell that stuff from a mile away.) Made from heavily fermented tofu, it is served in a variety of ways: fried with pickled cabbage on the side or boiled with chili peppers. 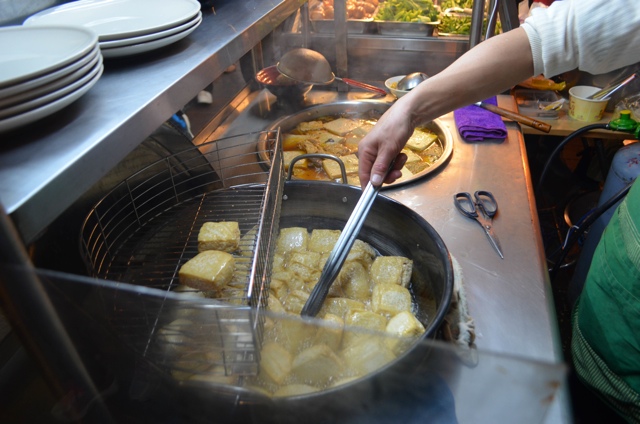 Lately there's been a series of vendors hawking stinky tofu French fries. The putrid tofu is fried, cut up in the shape of French fries and doused with cheddar cheese. It's just as good and much more convenient this way. 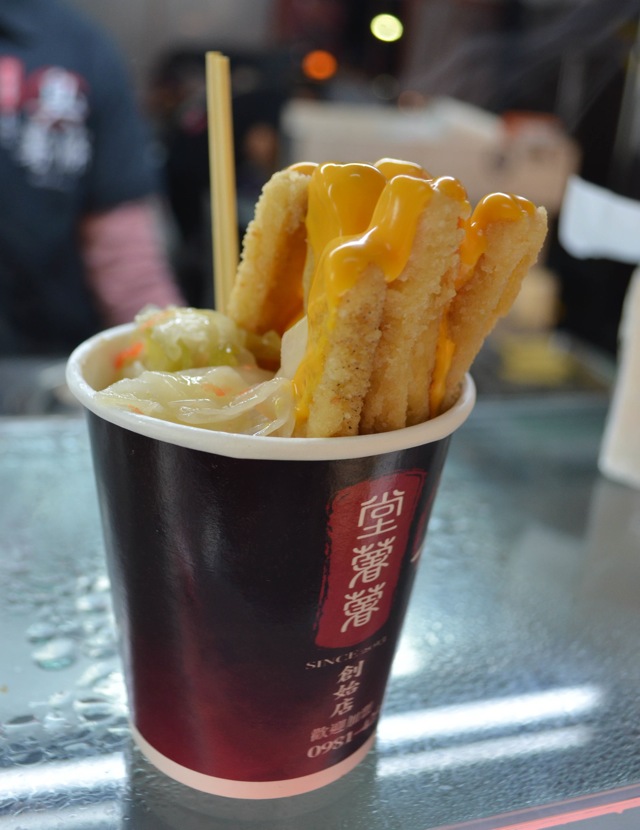 You can find this specialty at the tail end of Taipei's Raohe Night Market. They're glorious meat buns spiked with a liberal douse of black pepper and then baked in deep charcoal pots on site. The line gets numbingly long but a bite or two of this hot meat bun will leave you with absolutely no regrets. 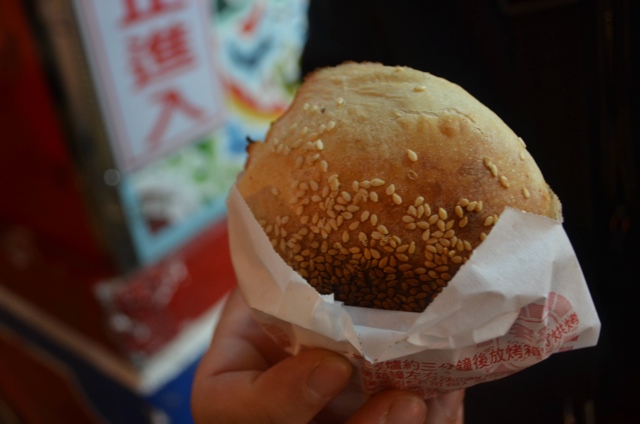 A runbing is a type of spring roll made with a wheat-flour based wrapper. You might find this stuffed with shredded pork and bean sprouts, but the most epic variation is when it's in its dessert form. A sweet runbing is sprinkled with crushed peanuts and then a scoop of creamy vanilla ice cream. Rolled up to a tight cinch, every bite pulsates with sweet and crunchy flavors. 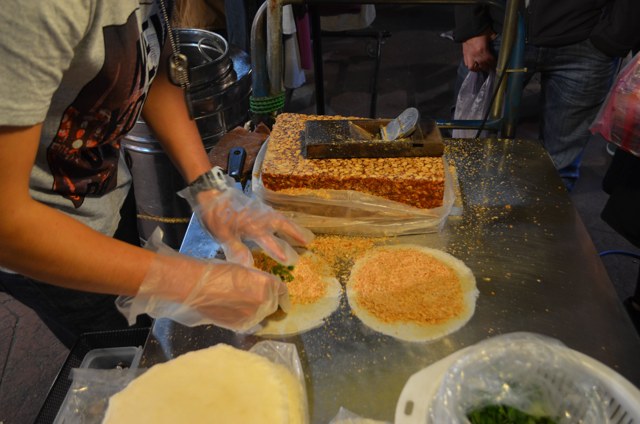 At its core, this is an herbal soup with warming and comforting properties. The intestines belong to a pig and it's cooked in a lovely and slightly milky broth with lotus and Job's tears (a Chinese pearl barley). 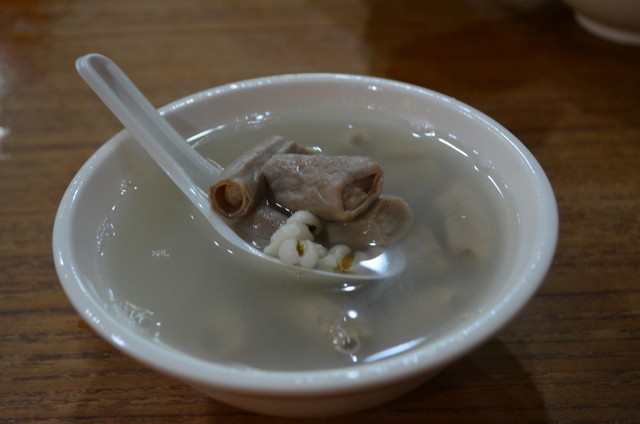 A stall at the Ningxia Night Market in Taipei specializes in this lovely snack. The taro is shaped into a hollow ball, stuffed with pork floss (dried pork) and egg yolk before being deep-fried in vats of oil. 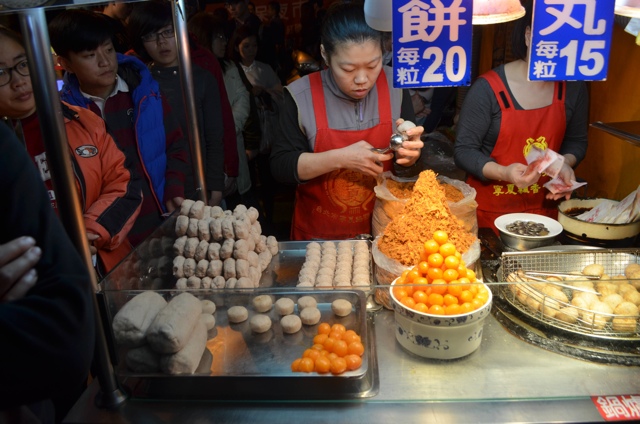 Aiyu Jelly Drink
Sometimes marketed as frog's eggs (it's not), aiyu is a jelly drink made from the seeds of a variety of a fig. It's served in sugar water with a handful of lemons and makes for a refreshing drink in between bites. 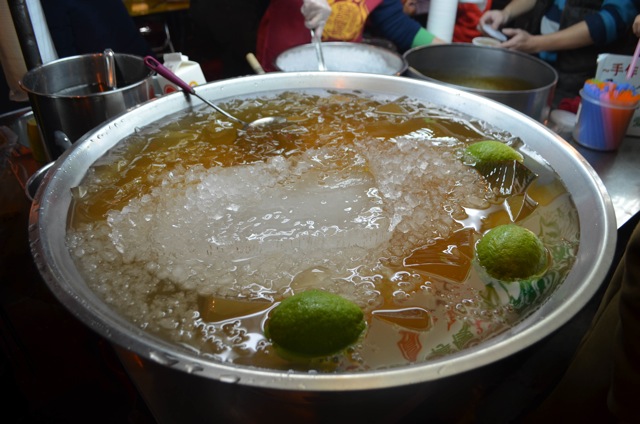 Another classic Taiwanese dish, the two sausages are made out of pork and rice, respectively. The sweet pork sausage is grilled and then enclosed in a sticky rice wrapper. It makes for an extremely filling snack. Pair it with thick soy sauce or wasabi for extra flavor. 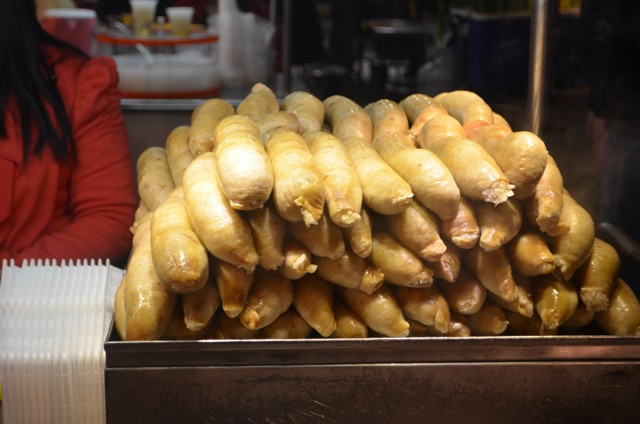 Found in Raohe Night Market, this squid dish is broiled on site and then served with a generous heap of chili and garlic. Don't be alarmed at its nearly translucent color. 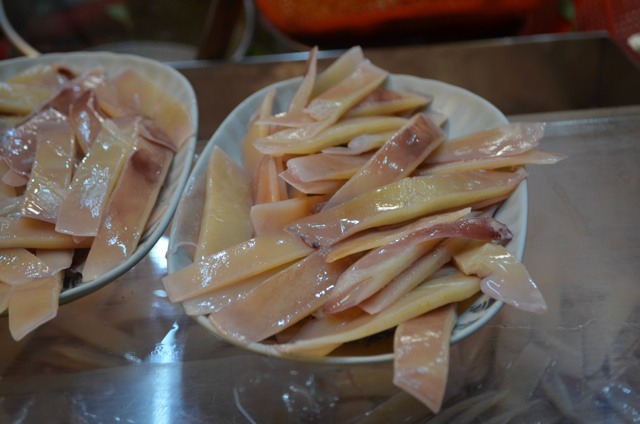 Japanese confections are common throughout Taiwan and at Rao He Night Market, you can find a vendor whipping up fresh dorayaki from scratch — sweet pancake patties sandwiches on top of custard or a creamy red bean paste. 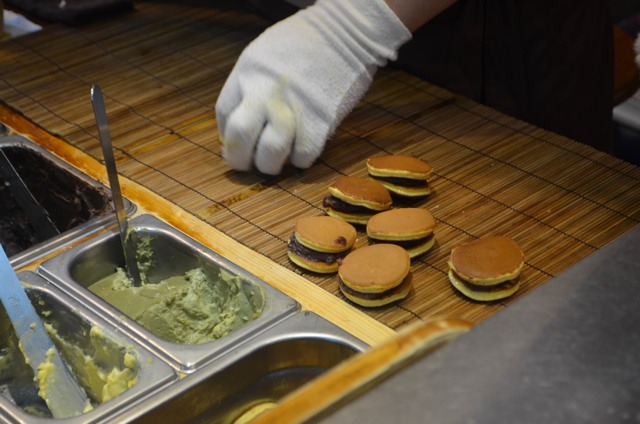 Coffin bread hails from Tainan, a southern specialty that's strikingly similar to chicken pot pie. It's a fried piece of toast stuffed with a savory seafood and vegetable chowder. The name was inspired when an archeologist noted that the toast looked similar to a coffin he was excavating. 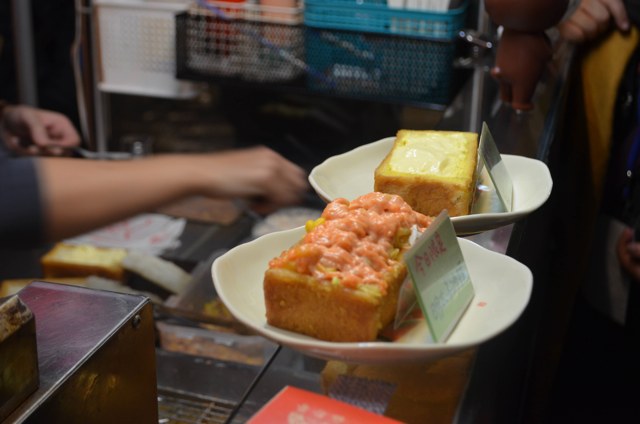 Fish balls are everywhere in Taiwan and can be found in soup or on skewers. At night markets the latter is the more common variety and is usually marinated in a savory satay sauce for extra flavor. 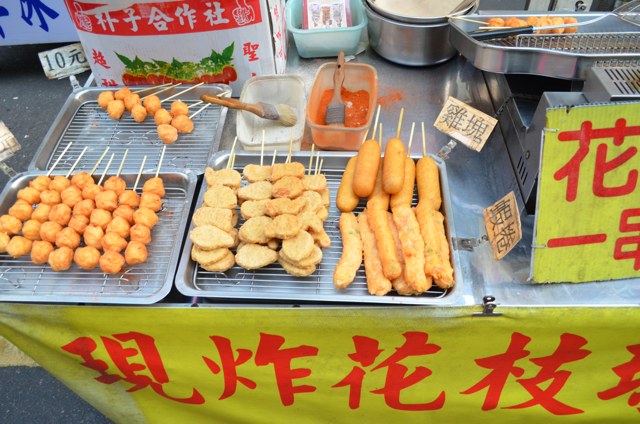 The Taiwanese take on fried chicken is exemplary and unique. The chicken is often cut into bite-sized pieces and doused in a liberal heap of salt and pepper and chili powder. Basil leaves are often added in for added flavor. 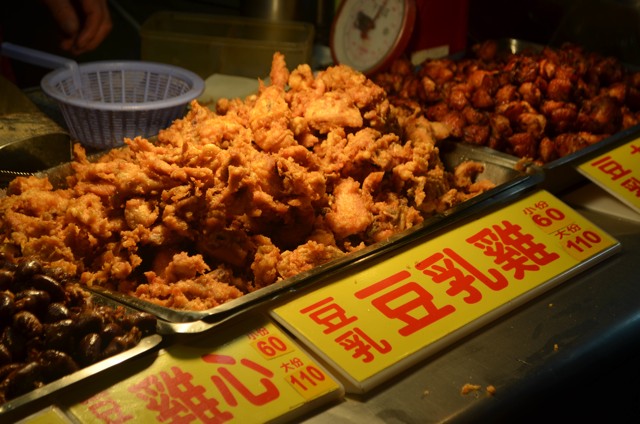 Guabao is the Taiwanese answer to hamburger, except fat pork belly slabs are the meat of choice and fluffy wheat buns are the carbs. Sandwiched in between are chunks of pickled mustard greens, a sprinkle of crushed peanuts, and a couple sprigs of cilantro. 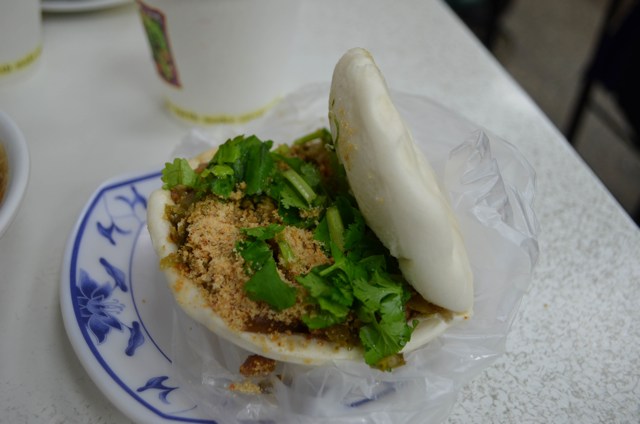 Made up of sweet potato starch, large oysters, egg and lettuce, oyster pancake came to life in Tainan and is now a staple at night markets around the island. It's doused in a sweet red chili sauce for flavor. 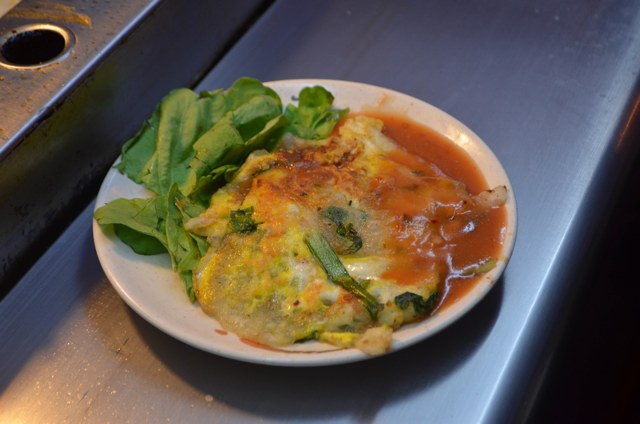 Made with pig intestines and a handful of large chunky oysters, this Taiwanese soup is a comforting smorgasbord of ingredients. It's thickened with cornstarch and has a slight caramel hue. 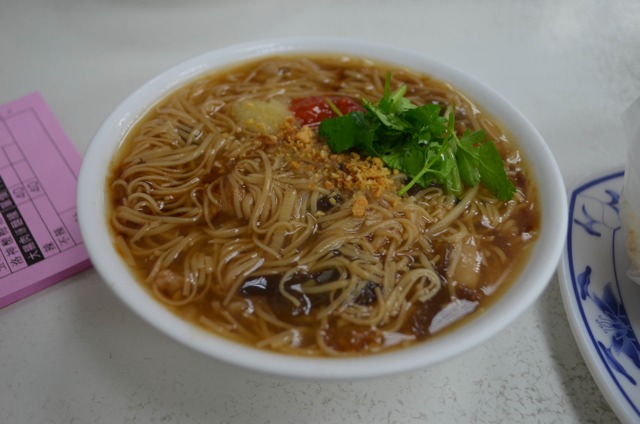 It's blood on a stick, fashioned with clumps of sticky rice and congealed pork blood. The delicacy came after WWII, when people began eating blood to replace expensive meat. The texture is a bit gritty and there's an iron flavor to it. It's definitely an acquired taste and not for everyone. 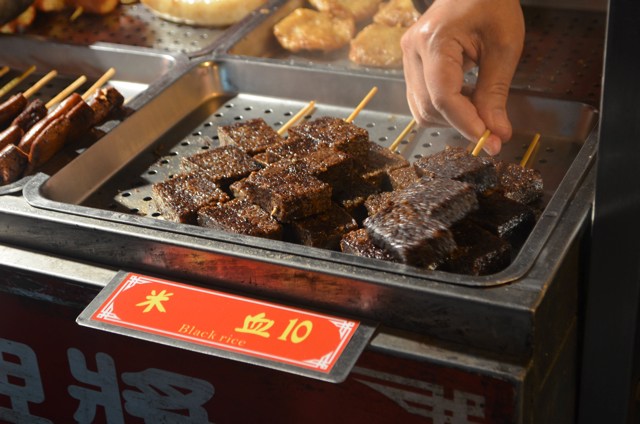 In general, Taiwanese sausages are sweeter and firmer than what we're used to over here in the States. The dish is air dried and flavored with rice wine and garlic. At the night markets, the sausages are usually served grilled on a stick, usually with a couple pieces of raw garlic. 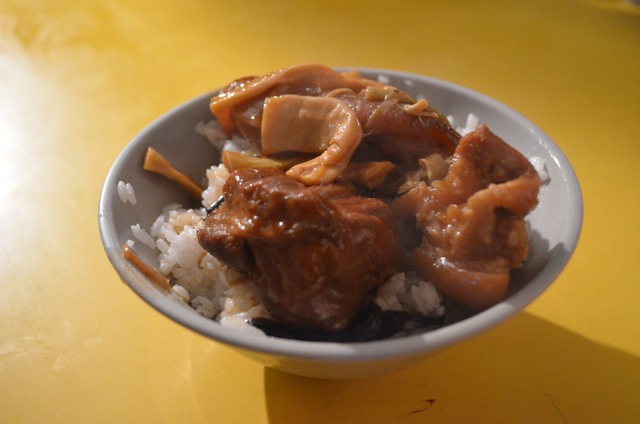 Few things are as comforting as fatty pork knuckles stewed for hours and then served on rice. At Ningxia Night Market, there's a vendor that specializes in just that. They add stewed bamboo shoots on the side for extra texture. 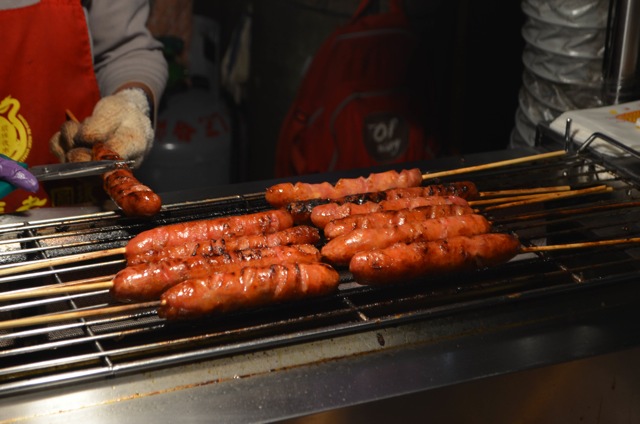 An entire squid sliced open and grilled fresh is a common sight in Taiwanese night markets. It's usually marinated with a bit of soy and garlic and skewered on a long stick. 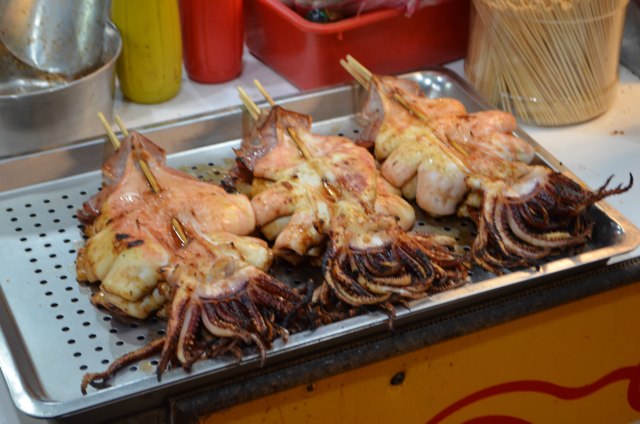 The Taiwanese take on mochi is usually doused with fine pieces of peanuts or sesame. In fact, this dessert delicacy is so beloved on the island that there's an entire factory dedicated to mochi in Nantou City. Unlike Japanese variations, the focus is more on the dough than on the filling. 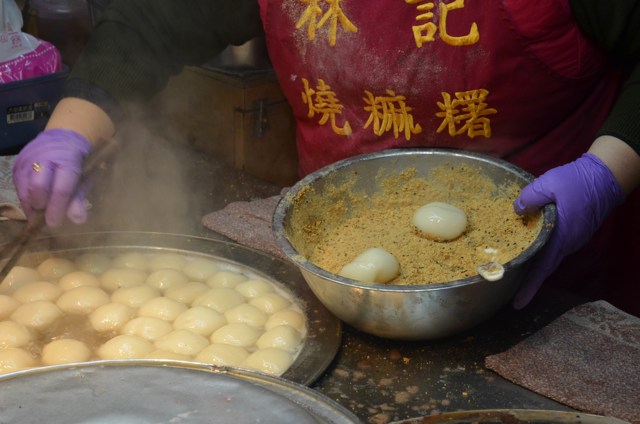 Clarissa Wei is a Los Angeles-based writer who knows a lot about Asian food and the hidden gems of her city. She lives in the San Gabriel Valley, and you can find her making dumplings from scratch or hiking the local mountains. You can follow her on Twitter at @dearclarissa

#gothamist getaways
#taiwan
#taiwanese night market
#travel
Do you know the scoop? Comment below or Send us a Tip