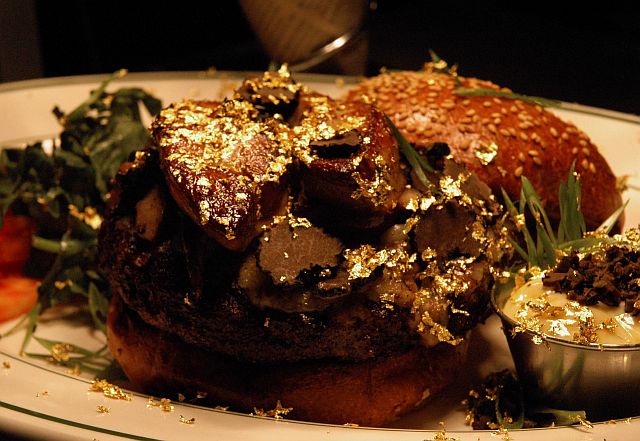 If you thought dropping $81 on a hamburger at The Old Homestead was enough to prove you’ve arrived, think again, hayseed – New York’s newest culinary status symbol, the “Richard Nouveau” burger at Wall Street Burger Shoppe, is going to cost you over twice that. They’re charging $175 for the experience, but money’s no object when it comes to showing the other hedge-funders you’ve completely lost touch with reality, right?

Momentarily the city’s most expensive burger, the Richard Nouveau consists of 10 ounces of Kobe-raised beef crowned with a thick “lobe” of seared foie gras, 25 grams of shaved black truffles, and aged gruyere cheese. It comes enthroned on a brioche bun anointed with a homemade truffled mayonnaise and garnished with more shaved truffles. Oh, and gold leaf flakes from Japan, which has the yummiest gold.

This edible monument of decadence also eclipses chef/restaurateur Daniel Boulud, whose $150 “Royale” burger is now the Hyundai of haute burgers. While the star chef tells the Daily News he won’t get drawn into a pissing contest and raise his price, he’s none too impressed with this arriviste competitor: “It's not about extravagance; it's about respect for real cooking. The luxury is in the care and the ingredients.” It is so on. For more on the Richard Nouveau’s creation, Pocket Change has video of its assembly and subsequent devouring.

#$175
#best
#burger shoppe
#decadence
#expensive
#hamburger
#kobe
#luxury
#most
#wagyu
#wall street
Do you know the scoop? Comment below or Send us a Tip