171 Starbucks In One Day 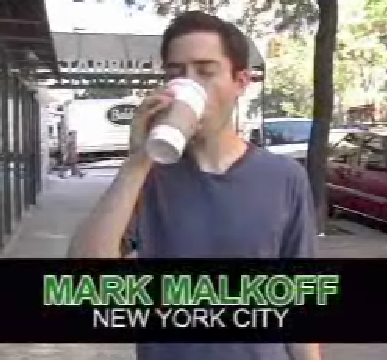 Incase anyone was wondering just how many Starbucks there actually are in Manhattan, the answer is 171. For some inexplicable reason (perhaps to become the next big viral video star), New Yorker Mark Malkoff decided to hit them all up in just one day.

On June 29th at 5:30am Malkoff makes his first of many purchases at 181st and Washington Heights, then for over twelve hours he travels by bike from store to store until a friend with a car decides to help him out. His caffeine-fueled journey ends at 60th and Broadway at 2:56am, we can't imagine he got much sleep for the next few days. Watch his video here.

Just how much did Starbucks shake out of his pockets in just over 20 hours? The grand total came to $369.14. This figure would have been less if a barista at 96th and Madison didn't accept an $80 bribe for a piece of pound cake after hours...and if he also didn't make accidental repeat visits to six of the same Starbucks.

Next up: the Duane Reade Challenge?