With so many great dining options in town why do we feel obligated to cook for ourselves and a crowd of hangers-on for Thanksgiving? Besides, aren't ovens for storing ones extensive VHS collection? Once you've spent $145 buying a free-range turkey and organic hericot vert, the cost of dining out seems downright reasonable. So put down the turkey baster, pick up your phone and make a reservation at one of our picks for a Thanksgiving out on the town. Yes, it's true you'll have a harder time making a leftover sandwich in the morning, but on the plus side: no dishes to wash.

Bateaux Cruises For a completely outside the box holiday celebration, why not hop aboard one of two Thanksgiving cruises being offered by Bateaux Cruises? The menu on the dinner cruise boasts four appetizer selections—like Pate de Canard and frisee salad—and seven entree selections, including free range turkey breast with cornbread stuffing and syrah braised short ribs with smashed red potatoes. There is even a Mediterranean vegetable dish for the veggies in your group. Alcoholic beverages are not included but you do get tea and coffee to sip while you sample one of the four dessert options. The ship sets sail at 7 p.m. from Chelsea Piers for a three hour tour of the New York Harbor that includes dinner, dancing to live music and, of course, 360 degree views through floor to ceiling glass windows. Jackets for men are requested, though not required, so we suggest dressing up. It is a holiday after all! Bateaux Cruises // Chelsea Piers, Pier 61 // 1-866-817-3463

Carmine's If you have the whole family in town (or 6 to 8 hungry friends) consider bringing everyone to Carmine's to share an 18 lb. roasted turkey plus apple, pumpkin or pecan pie and enough sides to feed a small army. It will be just like those meals from your childhood where everyone passes around heaping platters of food. Only this time nobody gets stuck doing the dishes. Get this enormous family style meal for $195 (plus tax, tip and, of course, multiple bottles of wine) and you have a massive meal for around $50 a head. Carmine's // 200 West 44th Street and 2450 Broadway // 212-221-3800 / 212-362-2200

Dressler The Michelin-starred Williamsburg eatery Dressler gets into the Thanksgiving game with a thoughtfully composed three-course menu for $84. The earthy flavors in the Kabocha squash and ricotta agnolotti (with butternut squash, black trumpet mushrooms, parmesan broth and sage) are a great starting choice and a perfect precursor to the tart, rich notes in the pan roasted venison with Anjou pear, braised red cabbage and creamy spaetzle. There is, of course, a heritage turkey with cornbread stuffing, cranberry compote and gravy for Thanksgiving purists. As of now, desserts are still TBA. Add the optional $40 wine pairing to round out a delicious meal in the gorgeous dining room accentuated by metal work from the Brooklyn Navy Yard. Dressler // 149 Broadway, Brooklyn // 212-384-6343

Esperanto For those on a budget, the South American bistro Esperanto has you covered. Just $20.95 per person gets you a choice of starters—either butternut squash soup with toasted nuts or frisee salad with Stilton, pears and cranberry—and a traditional plate of roasted turkey with glazed yams, Brussels sprouts, cornbread and sausage stuffing with an orange cranberry sauce. You can also choose between cheese cake in coconut flan flakes with acai coulis or chocolate volcano cake for dessert. The menu is available in the restaurant (and to go!) from noon until 7 p.m. Esperanto // 145 Avenue C // 212-358-9683

Fatty 'Cue The Fatty Crew has put together two Thanksgiving tasting menus of epic proportions at their West Village location. Carnivores can nibble on five courses (including amuse bouche, sides and dessert) of savory specialties that culminates in smoke-braised dark meat turkey and poached white meat served alongside squash with yogurt and beef floss plus gravy. Vegetarians (well, pescatarians) are treated to the same volume and variety with cured arctic char and chanterelle, gouda and buttermilk pasta replacing the meaty entries. Pony up for the Fatty pairings of wine and cocktails for the full experience. The $85 per person menu will be available at 4 p.m. and 7 p.m. seatings with reservations strongly recommended. Fatty Cue // 50 Carmine Street // 212-929-5050

Keens Steakhouse Give the gobbler a reprieve and channel your inner Ron Swanson at midtown mainstay Keens Steakhouse. Gorge yourself on a $94 meat-lovers dream that includes foie gras and Keens' "legendary" mutton chop, king's cut prime rib or steakhouse favorite, surf 'n turf. Sure there will be turkey and the like available too—but why would you eat turkey at a steakhouse? Keens Steakhouse // 72 West 36th Street // 212-947-3636

Michael Jordan's The Steakhouse N.Y.C. Located right in Grand Central Station this steakhouse could not be more convenient for guests coming in for the day on Metro North. And here Thanksgiving gets a steakhouse twist, with a starter of either butternut squash soup or an autumn salad, followed by roasted turkey breast and leg confit served alongside mashed potatoes and creamed spinach. It's a reasonable price ($48) for not having to over think your Thanksgiving plans while getting the folks in and out and far from your home. His Airness would approve. Michael Jordan's The Steakhouse N.Y.C. // 23 Vanderbilt Avenue // 212-655-2300

Prime Meats Take a trip back to turn of the century Brooklyn while sampling the locally-sourced, seasonally-themed delicacies available at Prime Meats. Whet your appetite with a comforting bowl of apple chestnut soup then savor roasted breast meat and moist, confit turkey leg with pretzel dumpling stuffing. Save room for a sweet apple pie strudel or the requisite slice of pumpkin pie and then stick around after the meal to sip traditional German Underberg to settle your engorged belly. The menu rings up to $40 with service beginning at noon and continuing through dinner. Prime Meats // 465 Court Street, Brooklyn // 718-254-0327 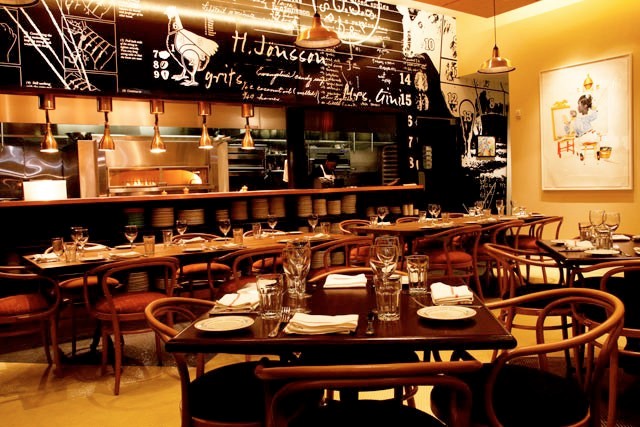 Red Rooster For a southern spin on Thanksgiving why not try hot Marcus Samuelsson's Harlem hotspot Red Rooster. If you've had trouble getting a reservation, now's your chance! At their first ever Thanksgiving meal the restaurant will offer prix-fixe menus upstairs ($55) for both lunch and dinner and a brunch buffet ($45) and dinner buffet ($55) downstairs. The requisite turkey will be served along with southern classics like cornbread, blackened catfish and mac 'n' cheese. For those on the brunching side, look for scrambled eggs and cinnamon raison french toast with nutella. Red Rooster // 310 Malcolm X Boulevard // 212-792-9001

The River Cafe Splurging is part of the holiday season so why not indulge yourself and your dining companions with a meal at Brooklyn's famed River Cafe? The four-course meal is on the pricier side at $135 per person, but the stunning views across the East River more than compensate for the high price. Also worth it? The food. Plus, after your meal you can work off those calories with a walk into Manhattan over the Brooklyn Bridge. The River Cafe // One Water Street, Brooklyn // 718-522-5200

Stove For a cozy Thanksgiving meal sit down at Stove for a four-course eating marathon with tons of dishes up for selection. Not in the mood for traditional turkey with stuffing and spiced cranberry orange gravy? Try the broiled codﬁsh with a deliciously light dill lemon butter sauce, spinach and ﬁngerling potatoes. The restaurant's warm and mellow atmosphere provides a great backdrop to their fine fare, and for $42 you can't go wrong (especially when you can finish off your meal with a Pumpkin cognac cheesecake). (Meryl Cates) Stove // 47-17 28th Avenue, Astoria // 718-956-0372

"Thankful" at the Gramercy Schoolhouse Remember when you were in middle school and everyone went around saying what they were thankful for? Well Vegan catering service Verite Catering and their chef/founder Daphne Chen have created a "cornicoppia of conscious food choices" for their plant-based Thanksgiving meal that the vegans of New York City should be very thankful for (November is Vegan month after all). Roasted seitan with cornbread stuffing takes the place of turkey and comforting selections like baked mac 'n' cheese with shiitake "bacon" crumbles are paired with traditional Thanksgiving dishes like mashed potatoes and roasted green beans. The meal wouldn't be complete without pumpkin cake with roasted pecans, chocolate ganache and caramel sauce for dessert. In addition to being meat and dairy free, most menu items are also gluten free. Gramercy Schoolhouse // 277 Park Avenue South // tickets available $15 Early Bird, $25 General, $60 VIP (includes unlimited drinks + vegan goodie bag)

Wall & Water The farm to table specialists at this downtown eatery have put together a menu that should please anyone in your party. The expansive selections start off with chilled jumbo shrimp, smoked salmon and trout, alongside fresh caesar and seasonal greens salads. Entree selections span the traditional—herb butter roasted turkey—to the not traditional but equally delicious. Think grilled atlantic salmon and vegetarian friendly goat cheese frittata. The prices are downright cheap—given the quality—at $60 per person (drinks not included) and $30 for children aged 6-12, who are given access to the "Children's Lounge" complete with games, puzzles and coloring. Wall & Water // 75 Wall Street // 212-590-1234

Water's Edge It's worth the trek to this aptly named Long Island City restaurant that affords storied views of Manhattan. The three-course menu offers myriad choices to fit any palate: There is a fresh fall salad of endive, watercress, gorgonzola and cider vinaigrette; for a different kind of fowl there is a roasted half duck served with soft polenta, toasted pine nuts, baby carrots and sugar snaps; and the pumpkin tasting for dessert—ice cream, mouse and tart—gives you that little taste of familiarity for the day. You can get those and more for $58 a person, or you could go all out and splurge on the $75 option that includes a full open bar. We know what decision we'd make! Water's Edge // 401 44th Drive, Long Island City // 718-482-0033

Got a Thanksgiving restaurant meal you are partial to? Put it in the comments!