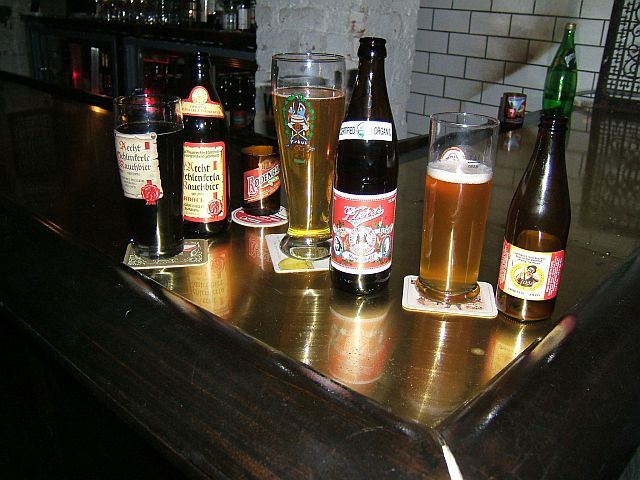 When news of 124 Rabbit Club’s opening broke, we dropped everything and headed down to MacDougal St. for some brews from the joint’s 40-plus beer list. Initially it was hard to find, then we saw the stairs leading down to an unmarked door and rang the bell only to find nobody home. At first we thought maybe we weren’t cool enough to gain admission, but it seems we weren't the only ones misinformed about the opening date of this “beer-easy.”

So earlier this week we made it back to the subterranean space, where we were relieved to find sanctuary from the bitter cold that nearly drove us into one of the NYU watering holes. We were curious about how the rathskeller-like space got its name, so we asked part-owner Drew Bushong. In addition to the Alice in Wonderland reference, this beer-lover's refuge takes its name from The Black Rabbit, the one-time club at 183 MacDougal that used to offer live sex shows in the 1890s before it was shuttered in 1900. While there’s nothing quite as scandalous going on here, there is an old Bettie Page pinup tucked into a corner by a table at the front of the room. 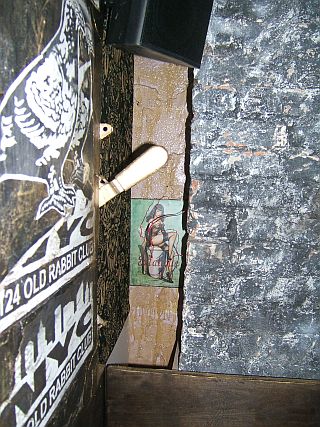 There's quite a range of beers on offer here with Belgium, Germany and the U.K. well-represented, with everything from Trappist ales to high-octane barleywines. One of our friends had the Aecht Schlenkerla Rauchbier Märzen, a smoked German beer. We've never quite seen the appeal of this brew, which smells rather like a bonfire, though Bushong tells us that some chefs from Momofuku were downing some late one night last week.

In true beer geek style, we went with a type of beer we've never heard of, a bottle of Leipziger gose. Gose,a wheat beer with coriander and salt added, is the sole exception to Germany's beer purity law, or Reinheitsgebot, a rather strict edict dating back to 1487 that says beer can only contain water, barley and hops. Gothamist also had some solids in the from of two pretzel bread sandwiches: one stuffed with roast beef and garlicky boursin cheese and the other packed with salami and cheddar. We wrapped up our drinking session with a bottle of Old Engine Oil, a dark British beer perfect for a cold winter night.

Don't worry if your beer knowledge is lacking, 124 Rabbit Club gives every customer a very comprehensive guide to beer styles as soon as they sit down and Bushong can always point you in the right direction. As for live sex shows, you're on your own.

#124 Rabbit Club
#beer
#beer geeks
#bettie page
#club
#MacDougal St
#NYU
#The Black
#this week
#west village
Do you know the scoop? Comment below or Send us a Tip