What we lack in spectacular foliage—yet—we more than make up for in proximity to and volume of wonderful cocktail bars, many of which note the changing seasons by revamping their menus to fit the weather. With fall, you'll find plenty of brown liquors, apple flavors, spices and other such offerings, though there's not a wrong season to drink any of the spirits. Below, a few offerings befitting an autumn eve out on the town; we promise no decorative gourds. 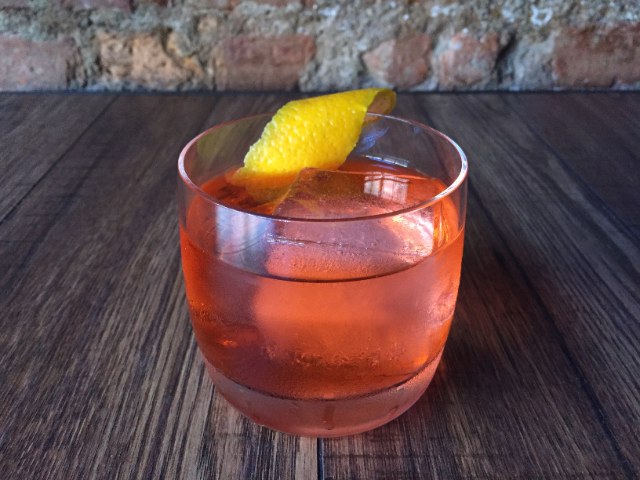 If you've yet to visit East Village newcomer Oiji for their excellent gourmet Korean comfort food, perhaps the lure of alcohol will finally seal the deal. For the season, the restaurant is serving Old Square Vieux Carre ($15), a Korean version of one of New Orleans' signature cocktails. In place of whiskey, they're using Hwayo 41, a type of soju (a rice-based spirit) aged in hand-made clay pots. To that, sweet vermouth, cognac, benedictine and two types of bitters are added—what, you had plans later or something? 119 1st Avenue, 646-767-9050 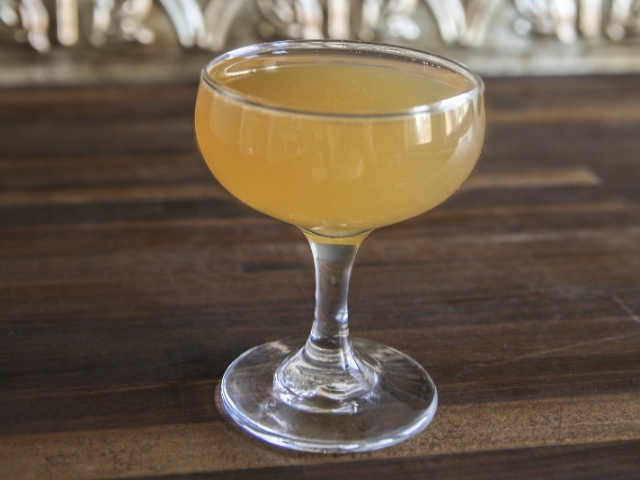 Peat's Dragon at The Up & Up

It's hard to go wrong at The Up & Up, which turns out some of the city's best cocktails regardless of the season. But for this autumn, the bar is exploring a savory, spicier side of imbibing, using black pepper to fire up a whisky-scotch-based drink called Peat's Dragon ($14). Using paint thinner Everclear, mixologists create a black pepper tincture by soaking the berries and then straining them with cheesecloth. After, it's mixed into a boozy combination of Cutty Sark, single malt scotch, Lillet Blanc, dry vermouth and Grand Marnier, which adds a subtle note of warm citrus. 116 MacDougal Street, 212-260-3000 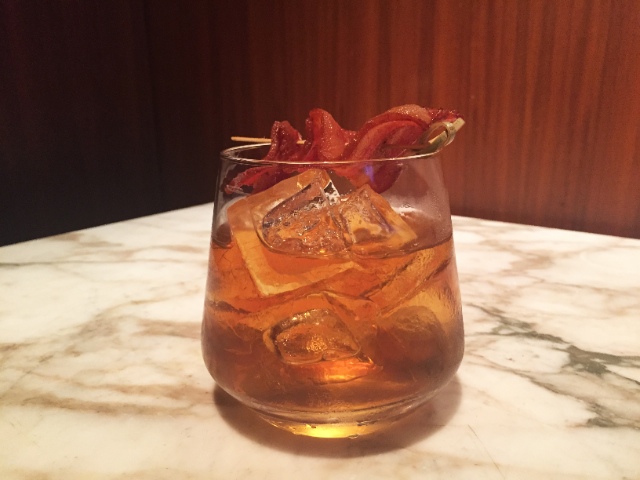 When visiting relatives inevitably drag you to look at the big dead tree in Midtown, you'll need a place to take the edge off before and after. Chef Todd English's brasserie Ca Va has a seasonal B&B cocktail ($15) in its lounge space that gets you buzzed while also offering a tasty snack. The simple cocktail combines bourbon, Noilly prat sweet vermouth and maple syrup, similar to a Manhattan though served on the rocks and without the bitters. On top, inexplicably but most welcome: a strip of bacon. 310 West 44th Street, 212-803-4545 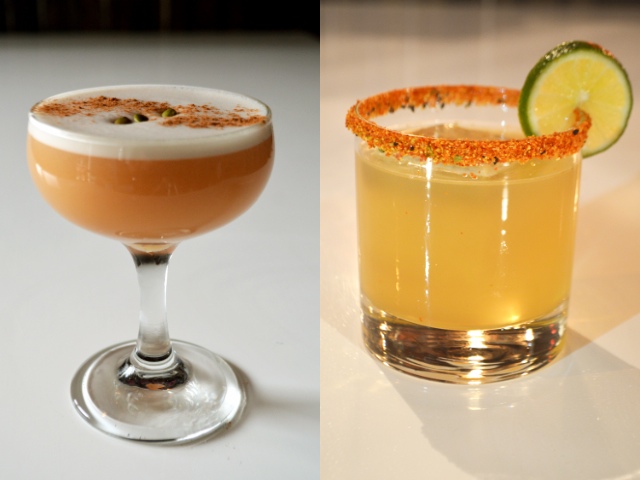 Pumpkin Sour and Granny Apple Bottom from The Randolph

Pumpkins and apples are two of fall's most notable bounties and both play a role on the seasonal cocktail menu at The Randolph, which operates two bars in Brooklyn and on Broome Street. In recognition of decorative gourd season, try the Pumpkin Sour ($14), made with pumpkin and spiced rum frothed together with egg whites. If pumpkin spice is not so nice, there's the Granny Apple Bottom ($14), a tart combination of holland pepper tequila with a granny smith cube and lime. 349 Broome Street, 646-383-3623; 104 South 4th Street, Williamsburg, 646-383-3623

Earlier this year, Mess Hall debuted Frederick Douglass Boulevard, quickly becoming a neighborhood go-to for their delicious cocktails and killer happy hour. For a spicy seasonal kick, try out their Coat of Arms ($13), where they've infused delicate Pavan French liqueur with habanero peppers and shaken it together with Starr African rum, orange cane, lemon juice and bitters. If that's too much for your tastebuds to handle, opt for a Lodge Lemonade ($12), a sweet and tart combination of maple-infused bourbon, lemon and pink lemonade. 2194 Frederick Douglass Boulvevard 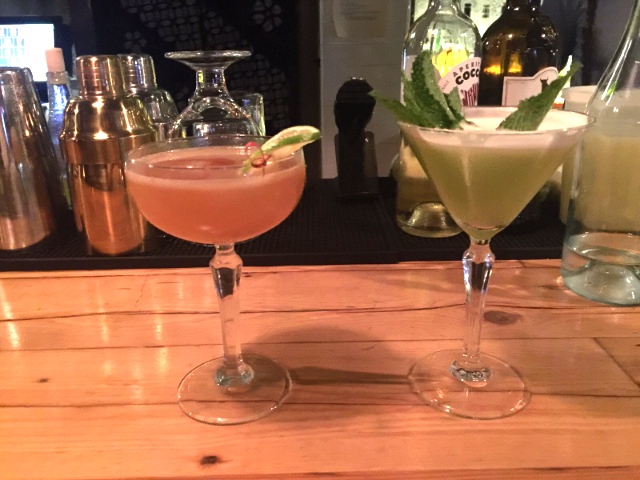 Pizzerias aren't typically associated with excellent cocktail programs, but Numero 28 is aiming to change that at their newest Bergen Street outpost, where they've brought aboard Tetsuo Hasegawa—formerly of Angel's Share and Maison Premiere—to design the beverage list. To hold onto summer as long as possible, try the M.L.C ($12) with Hendrick’s gin, pineapple, lime, homemade lime cordial, mint and cucumber or dive headlong into winter's chill with the Darkness ($12), a coffee creation spiked with dark rum, whipped cream and homemade bitters. 68 Bergen Street, 347-987-4819 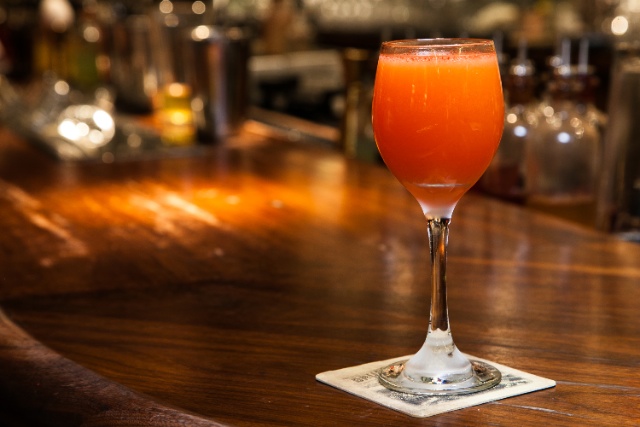 Strong-Armer from The Dead Rabbit

The cocktail "list" at lauded FiDi mixology haven The Dead Rabbit is really more of a cocktail "book," which includes seasonal offerings you'd need weeks to drink through if one were so inclined. One of their newer, more unusual offerings is the Strong-Armer ($15), which employs red bell pepper for some vegetal sweetness and an herbaceous note from tansy tincture. Rhum JM VSOP, a special rum made directly from sugar cane, and reposado tequila give the drink its boozy element, with citrus notes from orange and lemon plus some subtle heat from a chili salt rim. If anyone'll get you to eat your veggies, it's this talented team. 30 Water Street, 646-422-7906 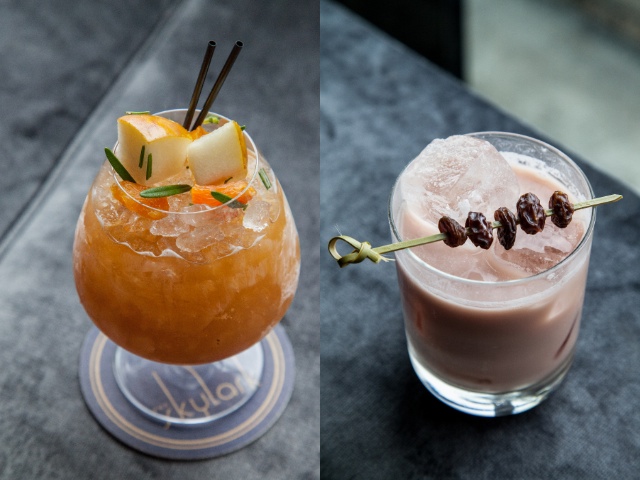 Fancypants rooftop bar The Skylark has both Empire State Building views and some tasty cocktails for sipping during sweater weather. Consulting mixologist Johnny Swet is doing a Pear Cobbler ($18) with gin, pear liquor and a pear butter garnished with rosemary and seasonal bosc pears. If that's too much crushed ice for your fingers to handle, opt for the Rum Raisin Cream ($18), a milky concotion made with Sailor Jerry spiced rum, tawny port, demerara (a caramel-like sugar syrup) and, of course, rum-soaked raisins and a splash of cream. 200 West 39th Street, 212-257-4577

#cocktails
#fall cocktails
#original
Do you know the scoop? Comment below or Send us a Tip