11 Fall Cocktails To Help Us Ease Into Autumn

What we lack in spectacular foliage—yet—we more than make up for in proximity to and volume of wonderful cocktail bars, many of which note the changing seasons by revamping their menus to fit the weather. With fall, you'll find plenty of brown liquors, apple flavors, spices and other such offerings, though there's not a wrong season to drink any of the spirits. Below, a few offerings befitting an autumn eve out on the town; we promise no decorative gourds. 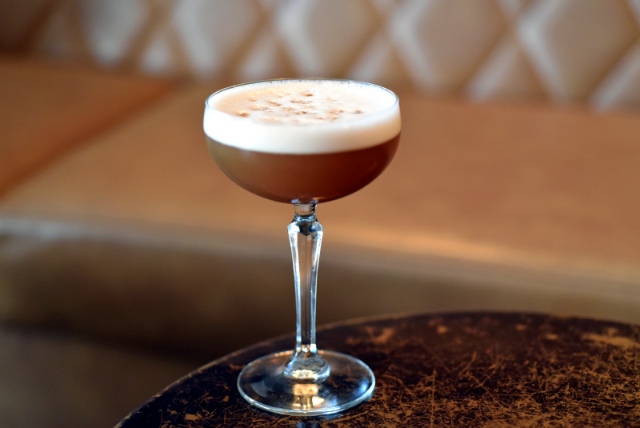 The Velveteen Rabbit is one of childhood's most traumatic books and in the West Village they're turning our collective childhood tears into a seasonal cocktail. At Analogue in the West Village, the Velveteen Rabbit ($18) isn't a depressing book about a child's toy but a nutty cocktail based off Remy Martin 1738 cognac. Added to that, Nux Alpina walnut liqueur, housemade toasted hazelnut orgeat, lemon, egg white and whiskey barrel aged bitters. Drink a few and forget how you left your cherished childhood stuffed animal out in the rain that one time. 19 West 8th Street, (212) 432-0200; analoguenyc.com

Park Avenue Autumn, the restaurant that changes with the seasons, is back in fall mode, with their autumn cocktail offerings that include mulled apple cider and whiskey served...from an office water cooler. Parked behind the restaurant's front bar is a rope-wrapped water cooler stocked with the boozy cider ($14), which can be poured hot or cold. If only we had this kind of water cooler in our offices. 360 Park Ave South, (212) 951-7111; parkavenyc.com 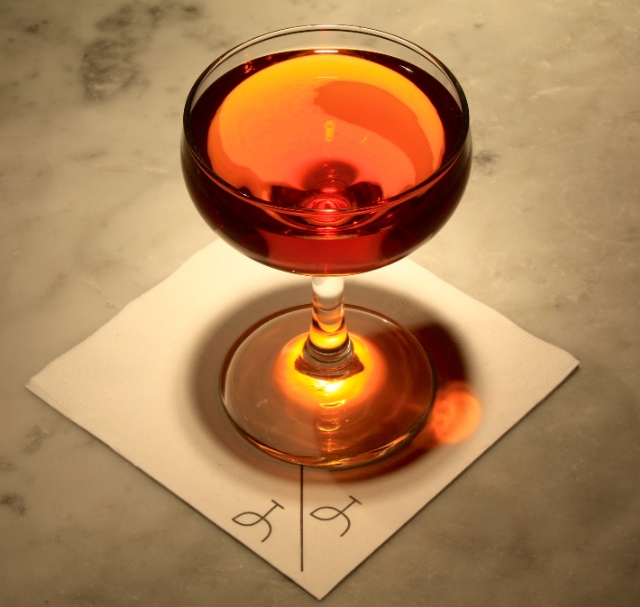 You were promised apples and brown spirits aplenty, so here's The Town & Country ($15) at exemplary Greenwich Village cocktail bar The Up & Up. This is a no-filler type of intoxicant, as it's just a combination of Mr. Katz's Rock & Rye with equal parts Atsby Amberthorn Vermouth and Neversink un-aged Apple Brandy. 116 Macdougal Street, (212) 260-3000; upandupnyc.com

At The Attic Rooftop, their contribution to employing the seasonal bounty means apple cider in their Orchard Chiller ($16) cocktail. Bourbon's the booze of choice here, with an assist from Angostura bitters, fresh lemon juice, mint and ginger beer. The bar even heats their outdoor space for the season, but there are views from the indoor section, too. 251 West 48th Street, (212) 956-1300; theattic-nyc.com 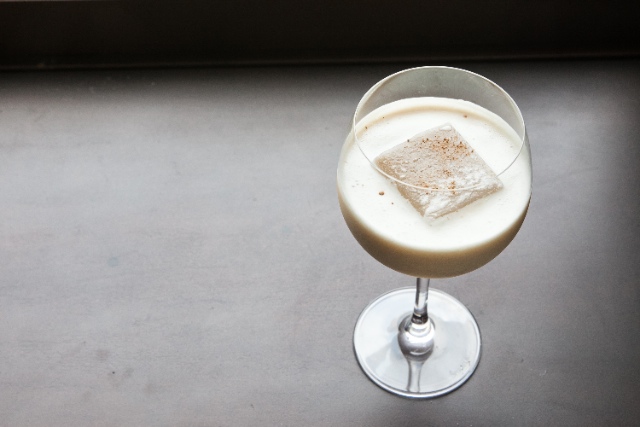 BlackTail—the Cuban-inspired cocktail bar from the folks behind The Dead Rabbit—is following in its sibling's footsteps, offering complex and thoughtful cocktails that evolve as the seasons do. For autumn, one of those specials is the Pineapple Milk, a cream-based tropical drink with flavors of pineapple and hazelnut. The shaken drink uses a Spanish brandy in addition to an aged Bacardi rum and is garnished with a grate of fresh nutmeg. 22 Battery Place, 2nd Floor, (212) 785-0153; blacktailnyc.com

We at Gothamist cannot endorse tackling this IRL, but you can Swim the Gowanus ($13) at Williamsburg's Kings County Imperial without turning into a mutant. It's a little like a jumped up G&T, using Chief Gowanus Gin, a creation of the New York Distilling Company, and fancy Q tonic water. The twist: apricot liqueur, fresh lemon and cinnabark syrup, a sugary concoction made from steeping cinnamon sticks in water. 20 Skillman Avenue, (718) 610-2000; kingscoimperial.com 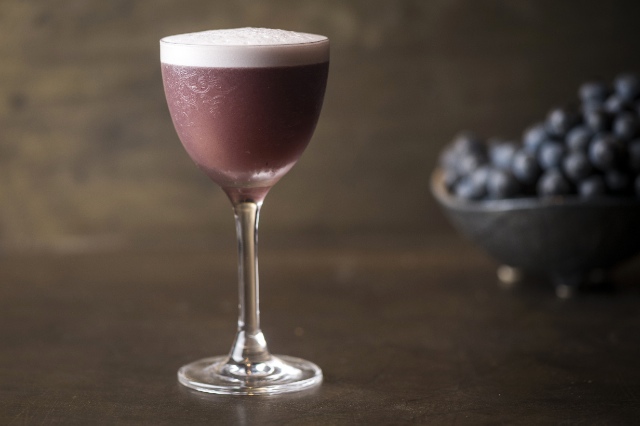 The Concord at Rouge Tomate Chelsea

The purple hue of the Concord cocktail at recently reopened Rouge Tomate comes courtesy of the grapes that bear the same name as the drink. This Aviation adjacent drink uses violet-infused gin and lemon, like its inspiration, along with pink grapefruit, amaro and egg white for that frothy texture. 126 West 18th Street, 646-395-3978; rougetomatochelsea.com

The same way that "session" beers are designed for longevity in a given span of beer-drinking time, low ABV cocktails are designed keep the drinker upright after downing a few drinks with dinner. The Wild Son, which recently began serving dinner in the Meatpacking District, designed their entire menu around low ABV cocktails, like the Smoked & Flipped ($12) whose only spirit is a hickory-smoked tawny port, which is an average of 20% ABV. This cocktail also employs egg for froth, in addition to lemon, a chipotle agave and Angostura bitters. 53 Little West 12th Street, (212) 727-7900; thewildsonnyc.com 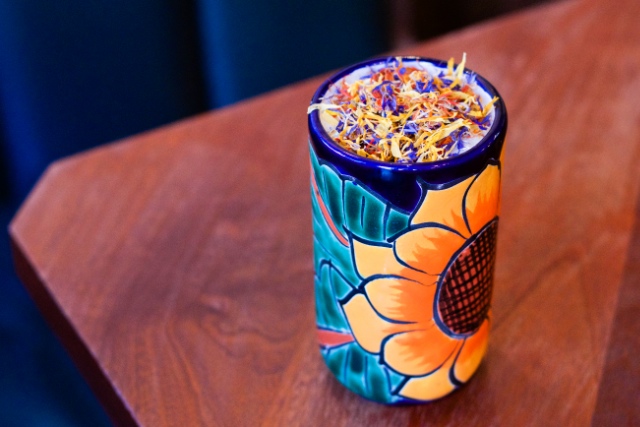 A good cocktail can be like a work of art, or at the very least be inspired by it, like the I'm Sorry Miss Kahlo ($15) at The Eddy in the East Village. Like its namesake, this cocktail wears a crown of flowers (dried, in this case) concealing a tequila-based creation below, which is perfumed with Poire Williams pear brandy, magnolia, orange and nopales, a nod to Kahlo's Mexican heritage. 342 East 6th Street, (646) 895-9884; theeddynyc.com

Up in Hamilton Heights, cocktail and ramen bar ROKC has an Apple drink that's practically a meal in liquid form. They've infused bourbon with caramel popcorn and paired it with apple cider and butter for full richness and cinnamon for spice. It's then garnished with a slice of apple that's been baked with honey and more cinnamon. 3452 Broadway 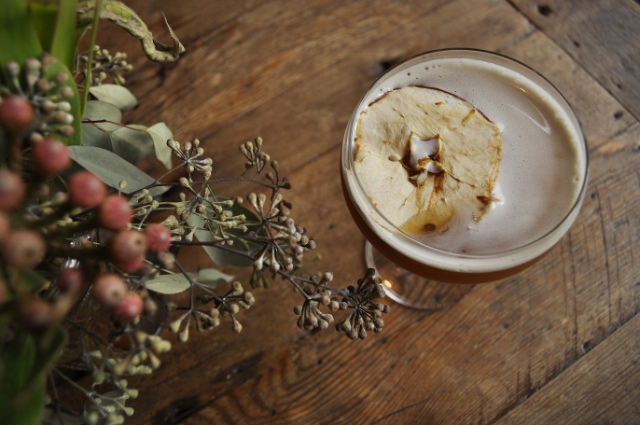 Canada Cane at the Queens Kickshaw

Up until now, the Queens Kickshaw has been known as a spot for cider, but they've recently secured a full liquor license that means a brand-new cocktail list just in time for fall. On it, there's the Canada Cane ($11), using our northern neighbors' maple syrup along with rum, lemon and apple bitters. If we find ourselves tempted to move to Canada in November, this could be a good introduction to our new lives. 40-17 Broadway, Astoria, (718) 777-0913; thequeenskickshaw.com

It's Pearfectly Fall ($14) at the Upper West Side outpost of The Mermaid Inn since we're smack in the middle of pear season. A pear puree gets thinned by Greenhook Ginsmiths American dry gin, spiced with a cinnamon syrup and brightened by a splash of lime juice. The ingredients are shaken then finished with sparkling wine, a sprig of rosemary and a cinnamon stick. 570 Amsterdam Avenue, (212) 799-7400; themermaidnyc.com

#cocktails
#fall cocktails
#original
Do you know the scoop? Comment below or Send us a Tip