As the Lower East Side has changed over the decades and many of its Jewish residents have departed, Yonah Schimmel's is one of the few distinctly Jewish businesses and restaurants that remain as a fixture of this largely departed culture and cuisine. —Wikipedia

'This mixed-use retail-residential complex will be a (great/valuable) (asset/addition) to the neighborhood," (PR Automaton) will say in a statement. "Glass-walled affordable housing units, Karl Fischer sweeping views, on-site indoor bicycle storage laundry," it will go on, tendrils of smoke curling from its headset. "Dynamic community, great fit, 24-hour steps from the subway concierge," it will gasp before finally erupting into flames.

The knishery's owners, though, are still batting down rumors of its demise. “We’ve been here for over 100 years, and are planning to stay another hundred” owner and Schimmel progeny Ellen Anistratov told Heeb Magazine. In any case, it's common newspaper practice to prepare obituaries prior to the party in question's actual demise. Here's some advance copy you can expect to enjoy in the coming months:

Yonah Schimmel's began in 1890 as a modest pushcart in Coney Island. Rumor has it that Schimmel took a break from knishing in favor of a brief stint as a Torah scribe until he purchased the LES storefront, which opened at 137 East Houston in 1910. A 1968 review of the place in the Underground Gourmet asserted that "No New York politician in the last 50 years has been elected to office without having at least one photograph showing him on the Lower East Side with a knish in his face." It claims to be the oldest knishery in America. Two years later, a car ran into its facade: 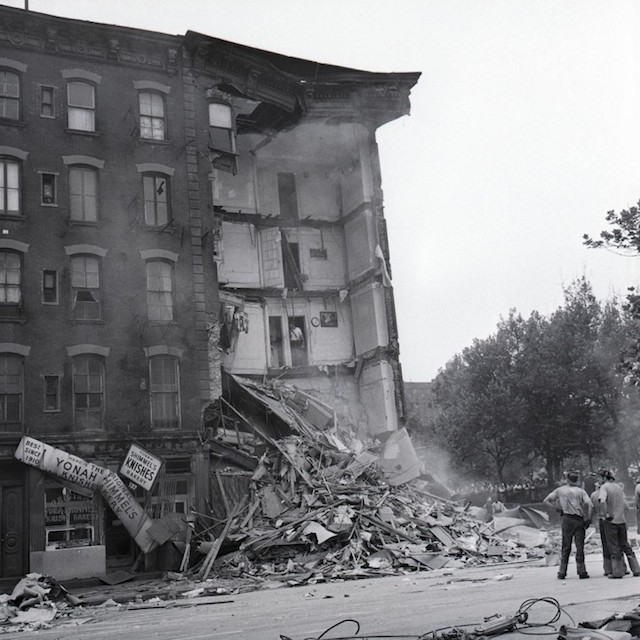 A crumbled exterior couldn't fell Yonah Schimmel's, but a rent hike delivers the blow of 1,000 warships. In a 2010 interview with the Times, Anistratov attributed the knishery's success to its namesake's devotion to the Torah. “The whole energy of this place,” she said, “is about immortality.”

A PR Automaton did not immediately respond to a request for comment.

#LES
#Lower East Side
#rent hike
#Yonah Schimmel's
Do you know the scoop? Comment below or Send us a Tip