Despite assurances to the contrary, MacDougal Street stalwart Caffe Dante has closed. Calls to the restaurant went unanswered this morning and construction workers wearing face masks were seen going in and out of the space today. The sad news was confirmed by a note apparently left by whoever will be taking over the space. 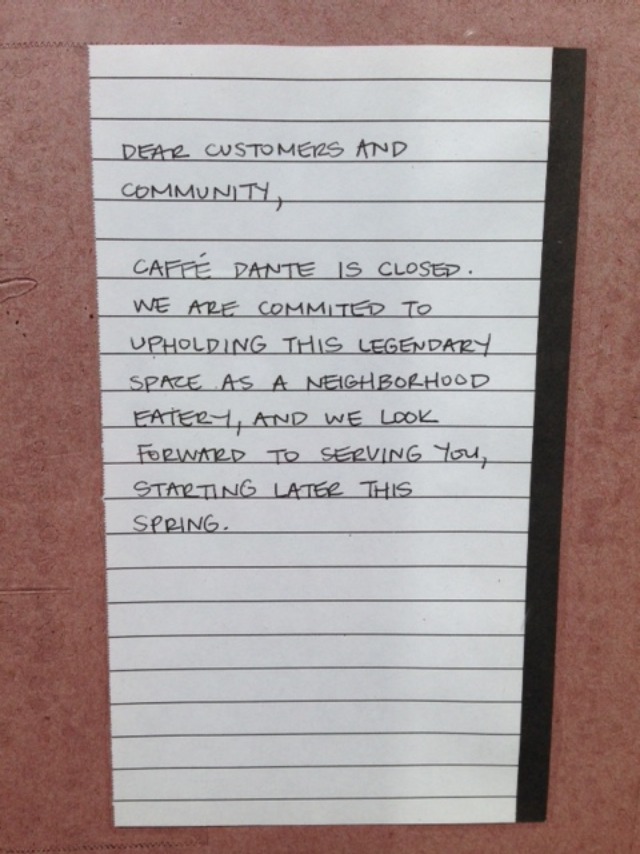 A tipster who agreed to speak on condition of anonymity says owner Mario Flotta told him that the initial rumors were true and that the business had been sold to an Australian group, as previously reported. "Supposedly they will be keeping the name," the tipster said. "But no news if the menu will change." The restaurant's last night of service was Sunday evening.

Caffe Dante had recently undergone a transformation that included a new menu, bar and other updates in advance of the eatery's 100th birthday. In February, Flotta told us an employee "must have overheard somebody talking and...misunderstood the whole situation" in regards to closing rumors. Though flustered by all the reports of the restaurant's demise, Flotta was adamant that the Caffe would stay open. "I'm telling you right now it's not closing," he insisted.

Calls and emails to Flotta were not returned at press time; we'll update when we hear back.

#caffe dante
#greenwich village
#Mario Flotta
#RIP
#original
Do you know the scoop? Comment below or Send us a Tip