April's infamous showers seem to have forgotten it's now May, and we're tired of it, but at least we have a good excuse to eat tacos and get tequila-drunk this rainy week, because once again it's Cinco de Mayo time. If you'll be partaking in Cinco de Mayo festivities, it's important you know that the 5th of May is not Mexico's Independence Day; Cinco de Mayo commemorates the Mexican Army's victory over the French at the Battle of Puebla in 1862. History lesson complete, let the drinking and dancing commence.

AVENIDA CANTINA: Start your night off with some fried, stuffed avocado at Avenida Cantina, and head downstairs to their tequila speakeasy for a Mexican Martini. The restaurant will have a mariachi band in house, and is offering a $40 prix fixe menu deal which includes an appetizer, entree, and (most importantly) unlimited Mexican beers or house margaritas for 2.5 hours. Taking advantage of the prix fixe deal will also save you from aimlessly cruising the city in search of an un-crowded place doling out spicy drinks.

AGAVE: Head to the West Village on cinco, seis, or siete de Mayo for free chips and guacamole at the bar from 5 - 9 p.m.. Also enticing are their $5 classic house margaritas and $5 chicken quesadillas. If you'll be uptown, you can check out THE DAISY, a new Agave-themed gastropub on the Upper East Side. They'll be offering the same chips and guacamole deal, plus $5 braised short rib tostadas, and $5 "The Daisy" margaritas. We'd recommend getting there early.

THE GANDER: Grab a taco from The Gander this Cinco de Mayo, crafted by acclaimed chef Jesse Schenker. The tacos' handmade tortillas will be made to order, with filling options of confit pulled pork in adobo, habanero, and lime pickled onions, or braised chicken with tomatillo cilantro, and cojita cheese (each $5). They'll be opening up their sliding glass doors and serving these goodies out of a makeshift taco stand for on-the-go customers. You can order them inside the restaurant, too, where you can also get your drink on with their jalapeno-infused tequila cocktail, La Jarocha. 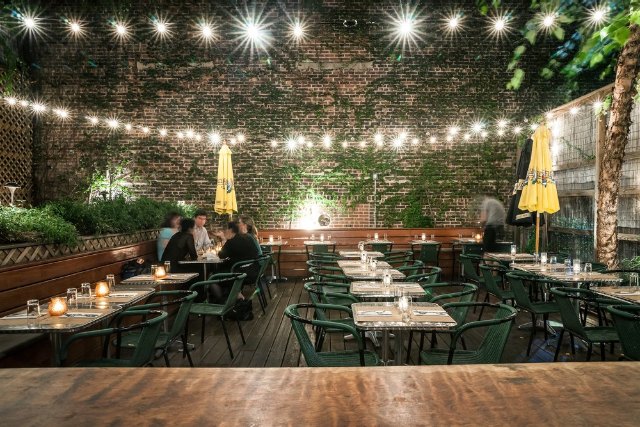 GRAN ELECTRICA: For a seemingly tamer party option, make your way to Gran Electrica's all-day Cinco de Mayo party in DUMBO. There will be a DJ and drink specials on hand for the celebration, and their chef will be slow-cooking meat in the garden, where guests are also invited to delight in the magical ambiance of their twinkling lights, ivy-covered walls, and views of the Brooklyn Bridge.

EL ORIGINAL: Hell's Kitchen Tex-Mex spot El Original will offer $5 happy hour margaritas and a $12 Cinco de Mayo-special frozen version of their signature Mexican Martini. There'll be some a la carte delicacies up for grabs as well, including Frito Pies with Texas red chili in a house made corn chip shell, Discoteca fries smothered in hatch queso and chili, and $5 tacos from their cart out front. And if you don't make it out to El Original for a night of partying, you can head over en el fin de este semana for their hangover remedy 7 lb. breakfast taco. It's free... if you can finish it all.

TOSCA CAFE: Indulge in a buffet style dinner of Mexican cuisine at Tosca's Cinco de Mayo rooftop party, which will feature both a mariachi band and a DJ. The dinner menu features some Mexican classics along with vegetarian options, and Mexican desserts, all of which sound delicious. $39.95 plus tax will get you in on this buffet/party, including 2 cocktails. They'll offer additional $5 drink specials after you've drank up your cocktail credit. 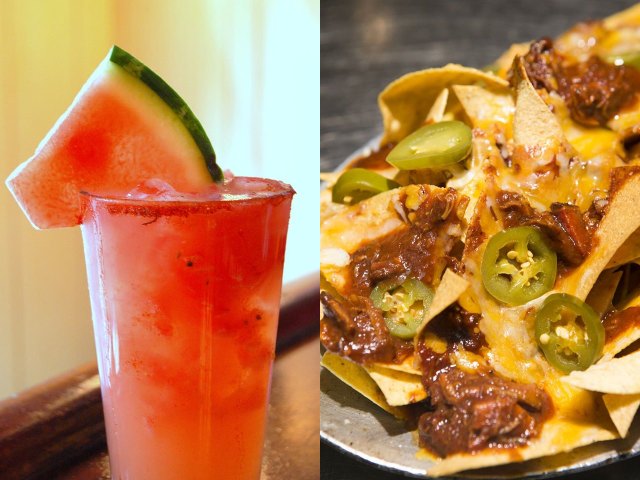 CINCO DE MAYA: If you're looking for an unconventional Cinco de Mayo celebration, you should check out this Cinco de Maya party, which will be hosted at Chinatown's Wyndham Hotel. Music by Nar, Bearcat, ITYS, and Serena Jara will grace the airwaves, but the dancing will really get going when Brooklyn based artist Ahsh Eff performs a live set. Entry requires a $5 minimum donation, but we have a feeling it'll be worth it. The party will kick off at 8 PM and go until 2 AM. (21+)

VIRGIL'S REAL BARBECUE: Virgil's will host an all-day party with a 2-for-1 special on house margaritas. The drink options range from spicy to refreshing and sweet: there's the Fresh Watermelon Margarita made with Herradure Antiguo, watermelon, and lime; the Spicy Habanero, a mix of Habanero-infused Sauza Tequila, ruby red grapefruit, and lime; and the Passion Fruit Margarita, which sounds particularly dangerous, with Cazadores Blanco, Triple Sec, passion fruit, and lime juice. And of course... savory wings and soul food sides to satisfy your drunk munchies.

ZEPPELIN HALL: If you really want to rage, take the PATH to Jersey City for Zeppelin Hall's biergarten & barbecue party. The hall will offer half price beers, wine, and cocktails from open until close. Choose from a plethora of beers on tap, and five different types of nachos. Depending on the weather, their outdoor space may open up for some drinking and dancing under the stars.