Empanadas are arguably the pinnacle of Latin American street food. These crescent-shaped patties come in many varieties from all over South America and the Caribbean. They're a crowd favorite because they're usually cheap, quick, and great for eating on the run. Here in NYC, many restaurants have stayed true to the roots of the original flour wrapped recipes, while others have remixed the usual meat fillings to excite the unique palette of NYC. There are a ton of great places to get a satisfying empanada throughout the boroughs; here are just 10 of them. 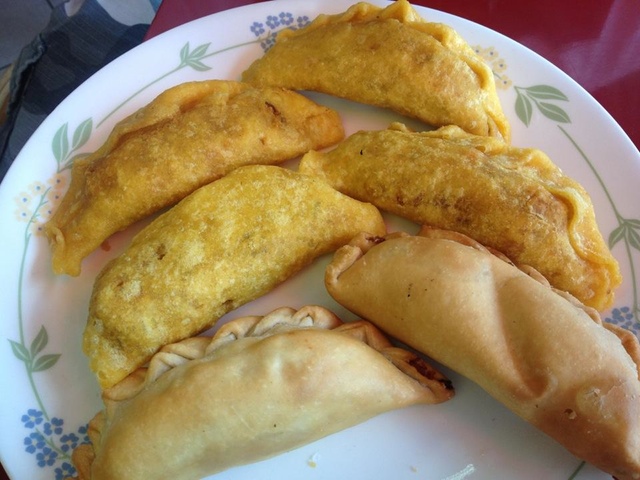 El Palacio de las Empanadas Ecuatorianas: Translated, the sign on this empanada cart means The Palace of Ecuadorian Empanadas, and the patties from this mobile kingdom would definitely please any king or queen. The two women who run the cart fill the dough circles, fry them on site and put them up on the rack right away. Despite simple fillings like cheese, chicken or beef, the empanadas are always served fit to bursting with lots of savory stuffing inside a warm, always crispy exterior. Located right by the corner of Myrtle Avenue and Wyckoff Avenue by the L train, the cart is convenient for grabbing a quick soda and snack on the go. Empanadas are $2 each and they go quick, so it's best to head over there right after your commute.

El Palacio is located on the corner of Myrtle and Wyckoff towards the Queens side. They operate in front of Duane Reade from around noon to 7 p.m. daily 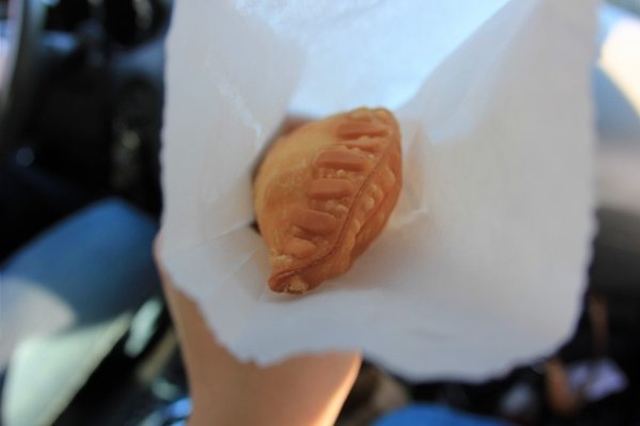 Empanadas Cafe: These tasty treats are worth the hike to Corona, Queens, boasting a trio of empanada shell options such as corn flour for $1.50, white flour for $1.75, and even organic flour empanadas for $2.00. They offer a medley of tasty fillings like spinach and ricotta, chorizo and potato, and even ham and cheese. This place might just be the holy grail of adventurous empanada seekers; anyone who refuses to go doesn't deserve these tender pockets anyway. 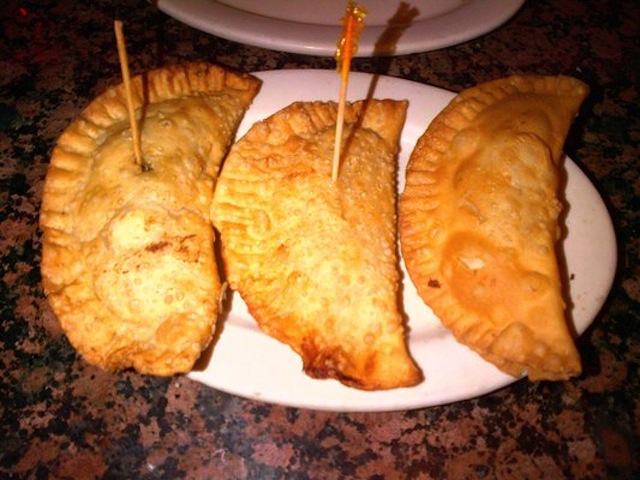 Caribe Star: This is one of Ridgewood's bougier Caribbean/Hispanic cuisine restaurants, but that doesn't mean it's not authentic—Hispanics actually eat here, too. Along with an array of other Dominican and Puerto Rican appetizers, there are six different types of empanadas like vegetable, cheese and shrimp for $2 each. They're also right by the Myrtle and Wyckoff L and M train station, so a great place to grab some empanadas to go, or sit down and savor them slowly. 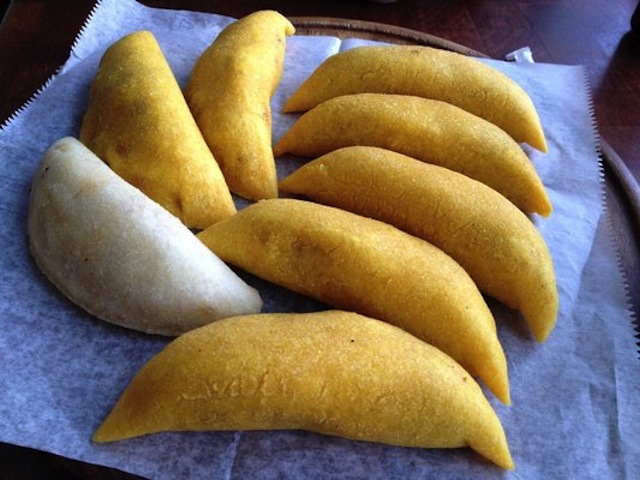 Mama's Empanadas: Despite the homey name, these are not your average homemade empanadas. The chain offers a lot of variety such as corn flour shells and the usual flour ones, as well unusual fillings like mac and cheese, carne with potatoes, chicken, and pizza. Prices range from $1 to $2.50. They're all over upper Queens, including Astoria, Elmhurst and Jackson Heights, so whenever the mood strikes, you'll have your pick of stores. 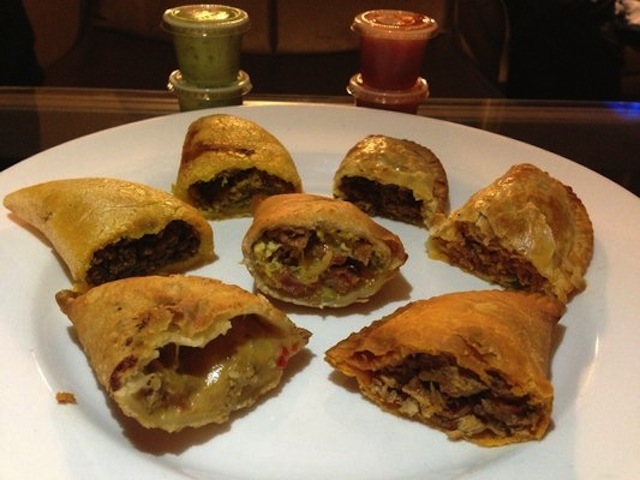 Empanada Mama: Yet another location reminiscent of a matronly figurehead, this lower Manhattan staple for empanadas has two locations in Hell's Kitchen and the Lower East Side. It touts fun, filled wheat flour empanadas, corn wrapped patties, and even a dessert variety with quirky names like Americano for the hot dog and cheese and Reggaeton for the pork, rice, and beans. Empanadas range from $2.75 and $3 each and are worth the price for such an adventurous assortment. 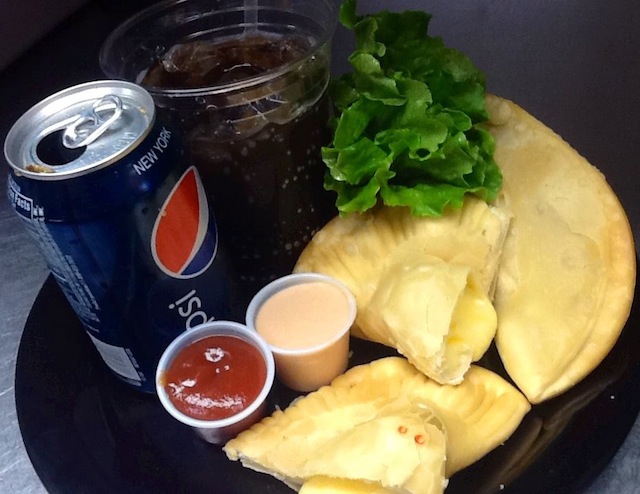 Empanadas Monumental: Named after the Monument in Santiago, DR, the lovely treats at this chainlet are fried Dominican-style and come in over 20 different fillings for $1.95 to $3. From the typical beef and chicken to spinach and cheese, there's bound to be one that'll catch your attention; there are also variations like cheese filled yucca balls and fruit smoothies on the side. It's worth the trek up to Washington Heights, or scouting out their other locations near Yankee Stadium and in Midtown Manhattan. 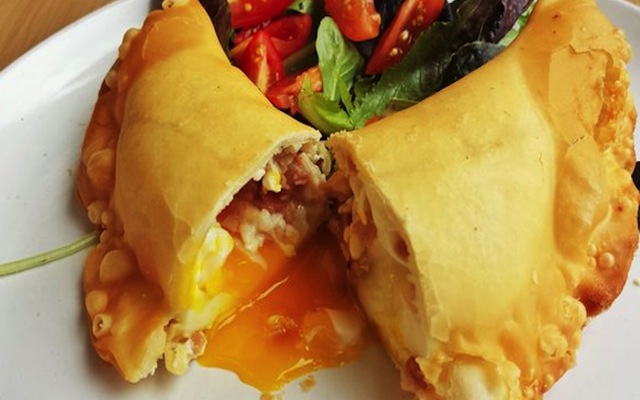 Pao & Cha Cha: Now this is a fun spin on food: Chinese and Venezuelan fusion food meets the empanada. Found in Astoria, this unique eatery has a breakfast empanada filled with egg and cheese, and a few other options like cheese and herb, chicken, pulled pork, and beef. They're $3 each, but reviewers on Yelp rave on and on about them, so head on over. 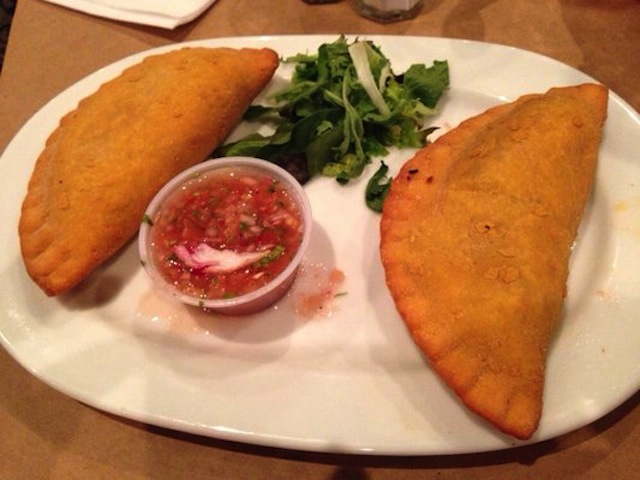 Pio Pio: These Peruvian-style empanadas are usually served alongside other tempting dishes like the mini-chain's luscious rotisserie chicken, yellow rice and addictive green sauce. Their succulent chicken-stuffed empanadas are not only a great starter before a green sauce binge, they're two for $8 and great alongside the restaurant's popular sangria. Plus, they're everywhere, with multiple locations in Queens and Manhattan, and even one in Brooklyn and the Bronx.

Super Pollo Restaurant: Thanks to the thick wheat flour and egg dough, these Ecuadorian-style empanadas are crunchy on the outside and doughy on the inside; what's not to love? Tucked away on a corner of Woodward Street, Super Pollo may be a bit off the beaten track but it's not far from Myrtle Avenue and Fresh Pond Road, and it's well worth seeking out if you're up for the trip. As with many South American restaurants, the patties come in cheese and meat fillings for $1.50 each, and a tempting empanada combo of four with a can of soda can be procured for just $6.

Gallito's Kitchen: Meaning "little rooster's kitchen," this Brooklyn Heights Mexican restaurant only offers one form of empanada, but they are some of the best in the city. Homemade style and stuffed with refried beans, sweet plantains, cheese and served with avocado sauce, they're a $6.95 gut-buster—an order comes with three—with succulent stuffings that can't be missed. The avocado-aji sauce served for dipping is also a hit, packed with tomatoes, fiery aji peppers, cilantro and onion.

#empanadas
#latin american
#south america
#original
Do you know the scoop? Comment below or Send us a Tip