Thanksgiving is probably the last thing on all of our minds, except for those of us who are now dreading forced family bonding time with those who we secretly (or not-so-secretly) suspect voted for...You-Know-Who. If you'd rather get drunk on tryptophan (and alcohol) than engage in the almost-mandatory political feuds that go along with family get-togethers, spend your turkey day at one of these restaurants. Now that Trump is our president, all the more reason to stuff your face and spiral into a Thanksgiving coma followed by the dull comfort of consumerist oblivion. In other words, do something nice for yourself this Thanksgiving by splurging on a nice meal and hugging the people you love. From the more traditional pumpkin pies and turkey-and-stuffing plates to sweet potato latkes, our Thanksgiving picks have something for everyone.

Let's start this off with a traditional pick for the less-adventurous sticklers in the back. Sarabeth's Upper West Side has a $65 four-course prix fixe complete with pumpkin and apple everything. If you're gunning for a classic Thanksgiving meal, you can't go wrong with the pumpkin soup with lobster, a beet and apple salad, or either of the two desserts (pumpkin pie or apple-cranberry crumble). But what is always the true, crowning glory of every Thanksgiving is the turkey, and Sarabeth's does not disappoint. Filled with a leek and sausage stuffing, the bird is served with roasted root vegetables, a cran-apple compote, and, suffice it to say, the main reason I'm considering paying $65 for a meal: brown butter whipped potatoes. There are still some very limited reservations available. 423 Amsterdam Ave. b/t 80th and 81st St. // 212-496-6280

If you're looking for a delicious Greek Thanksgiving, look no further than Astoria staple MP Taverna. There's a few ways to stuff your face with this delicious food: a three-course prix fixe ($40), an a la carte option available by reservation between 12 and 6 p.m., or a take out feast that will serve 8-10 people ($270). I'd go for a traditional-unique mix here: butternut squash soup ($10) and roasted turkey with mashed potatoes, string beans, and gravy, stuffed with a traditional sausage and bread stuffing, and topped with sour cherries and sage ($26), followed by some Greek flair in the yogurt with cherries, walnuts, and honey ($6). The Grecian Feast is a great deal except for the fact that it's an extra $25 for some sweet, sweet baklava, which just breaks my heart. 31-29 Ditmars Blvd., Astoria // 718-777-2187 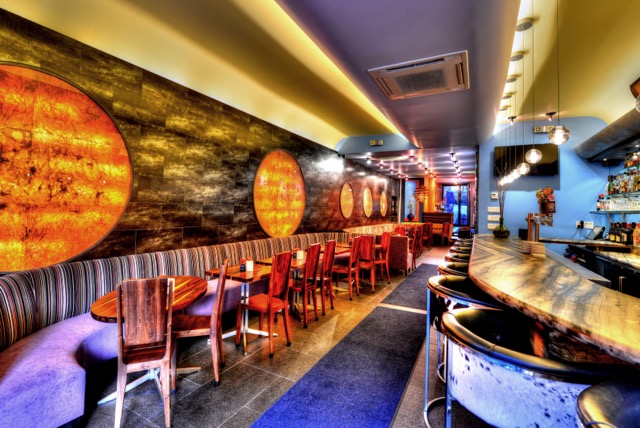 For a slightly higher-end Mediterranean feast, come to the Upper West Side's Bustan. Though there is no prix fixe menu, most combinations will bring you in at around $50-60 per person (we'll ignore the $63 two-pound sea bass, or the $65 aged ribeye as cruel jokes). They're also offering a delicious-sounding sweet potato latke ($13). The pita-artichoke stuffing alone makes this turkey ($32) drool-worthy. The added cranberry-pomegranate relish might have been enough to make me cry. Then I read that there will be a Honeycrisp apple cake served with pumpkin spice gelato ($10). Now I'm actually crying. 487 Amsterdam Ave. // 212-595-5050

Bar Boulud comes through this year with a semi-traditional, super tasty Thanksgiving menu. Of the extensive three course French menu ($70), some highlights include squash soup with spiced creme fraiche, brioche croutons and cilantro, wild mushroom agnolotti (similar to ravioli) with hazelnuts and sunchokes, a duck breast Normandie with roasted apples and spiced cider jus, and a dark chocolate pecan tartlette with bourbon ice cream. Everything sounds rich, creamy, and delicious, with just enough health to mitigate the effects (or at least absolve you of the guilt) of all the food you're going to eat. 1900 Broadway at 64th St. // 212-595-0303

Three words: jerk turkey breast. Miss Lily's two locations, in the East Village and SoHo, will be hosting a Caribbean prix fixe ($48) complete with the standard-bearers (pumpkin soup and sweet potato pudding with rum raisin ice cream), as well as some unique takes on traditional dishes. On top of the aforementioned jerk turkey breast (served with gravy, steamed callaloo, and mac and cheese pie), the Caribbean diner will also be serving up some pumpkin pie with allspice whipped cream to finish out the night. Soho: 132 W. Houston St. at Sullivan St.; East Village: 109 Avenue A at 7th St. // 212-812-1482 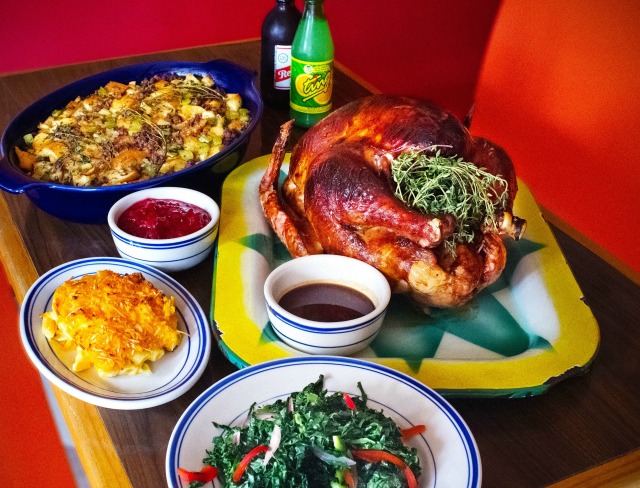 Angelica will be dishing out a limited but scrumptious vegan menu. Start your meal with a creamy chestnut soup, followed by a main course of either roasted carnival squash filled with royal corona beans, or seitan with mushroom gravy and cinnamon roasted sweet potatoes. For dessert, you can choose either the gluten-free classic pumpkin pie served with ginger whip, or (for chocolate overload) vegan chocolate layer cake with chocolate fudge frosting and raspberry filling. And the best part is all the food is regular price, which means you could get a three-course meal for around $35. Food and reservations are on a first-come, first-served basis, so get it quick because the restaurant will only be open from noon to 6 p.m. 300 E. 12th St. // 212-228-2909

If you're looking for a lil' something something to get through Thanksgiving night with your relatives, Benchmarkin Park Slope has a $78 turkey dinner plus some. And by something, I mean the Cranberry Bourbon Smash—a mix of bourbon, snap liquer, actual cranberry jam, and ginger syrup—a drink that will ease the pain of the political process. And maybe you can also have some of the red wine braised short rib, espresso-rubbed venison loin, sous vide turkey breast and leg, or brown sugar pecan bread pudding. And another one of those drinks. 339 2nd St., Brooklyn // 718-965-7040 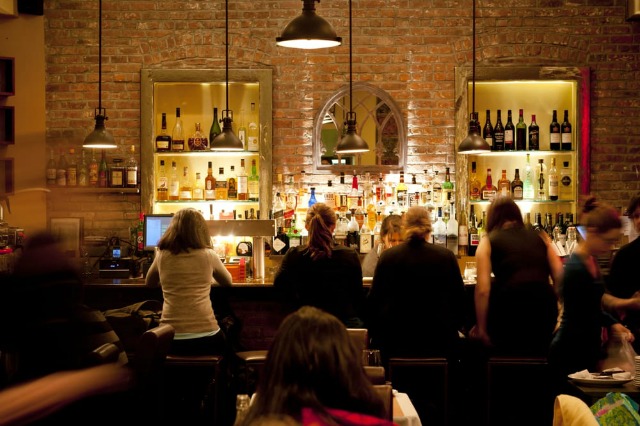 On the opposite end of the spectrum, il Buco Alimentari e Vineria is offering an $85 Italian prix fixe meal in five courses, starting with a traditional salami or cheese platter. For a hearty Thanksgiving selection go for the Orzotto con Zucca—fairytale pumpkin with black truffle and parmigiano reggiano—for an appetizer. There's always turkey with cranberry mostarda and sage gravy, but I'd choose the wild monkfish with scallions in a spicy lobster broth, just to shake it up a bit. The dessert is family-style, which is a great excuse for eating way more than a single serving, especially of the ginger bread apple cake. 53 Great Jones St. // 212-837-2622

And then there's Sant Ambroeus. A few years ago, Restaurant Week, combined with a friend's gift card and sneaking in for the lunch serving, allowed me to eat an unbelievable meal at this cozy West Village spot for a semi-reasonable fare. To this day, that meal haunts my food dreams. So I'm loathe to leave their Thanksgiving offerings off of this list. Butternut squash puree soup ($15), ossobucco-filled agnolotti with maitake mushrooms ($29), and apple streudel with pine nuts ($10) flank a turkey that I am sure will be the best investment of $36 you could ever make in one meal. Coming in at a rough $90, this meal is probably one of the bigger and definitely the best investment you will ever make in something you're putting in your mouth. 259 W. 4th St. // 212-604-9254

P.S. For those who aren't looking for a sit-down meal, a delicious Thanksgiving-themed burger is just around the corner. None other than by CHLOE. is bringing back the popular Gobble Gobble ($11) starting Nov. 1. A mix of everything that is pure and good about Thanksgiving, all on one potato bun: this burger features lemon-caper seitan, sauteed kale, rosemary gravy, harvest stuffing, and is topped with fresh cranberry sauce. And while everyone else has to wait until Thanksgiving for it to be socially acceptable to eat leftovers for every meal, this burger is available all month long. The burger will go well with another of the restaurant's November specials, the blue raspberry margarita ($10), or the long-standing ice cream (roasted banana bourbon or salted vanilla caramel sounds like the best fall dessert). Locations in West Village and Flatiron

#thanksgiving
#where to eat thanksgiving dinner in nyc
#original
Do you know the scoop? Comment below or Send us a Tip