There are very few secrets left in New York City when it comes to drinking and dining out—but there are still some secluded spots that feel like a secret. From tucked-away haunts in Midtown to an easy-to-miss gem in Queens and a place we're not even sure how to get in to, here are experiences worth seeking out. 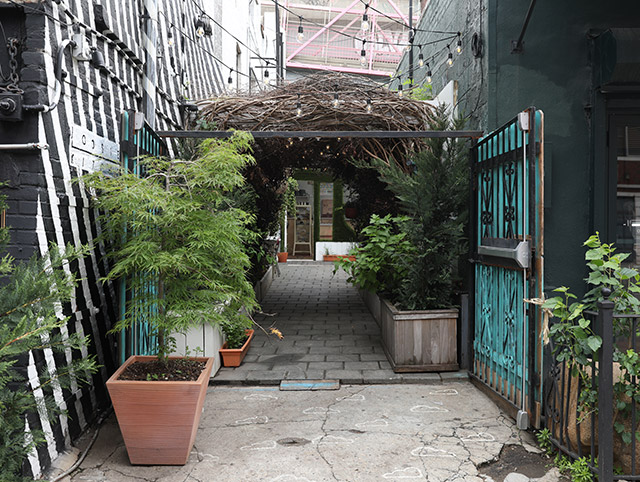 Loosie's Kitchen & Cafe: Next door to its sister cocktail bar, Loosie Rouge, is an ivy-lined alley that leads up to Loosie's Kitchen & Cafe. There's a breezy, outdoor sunroom that's all kinds of beautiful (blonde wood and marble accents, plants, a colorful geometric mural). The fare is Southern-inspired with a Brooklyn twist, featuring fried chicken biscuits with turmeric slaw at breakfast, and beignets with whipped Nutella for dessert. 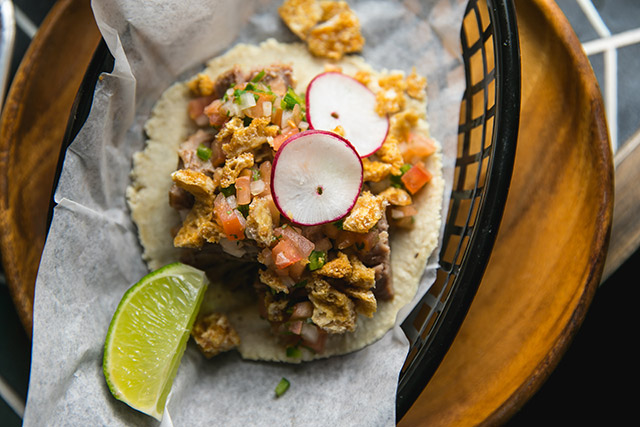 Borrachito: Walk to the back of casual East Village cocktail bar The Garret East and you'll find this new Mexican street-food spot. It's an intimate space seating just 14 people (though their food can be ordered from anywhere in the bar). On the menu are tacos on house-made corn tortillas — we recommend the pork bomb (carnitas, chicharron, pico de gallo, pickled onions), made-to-order guacamole, and paletas. 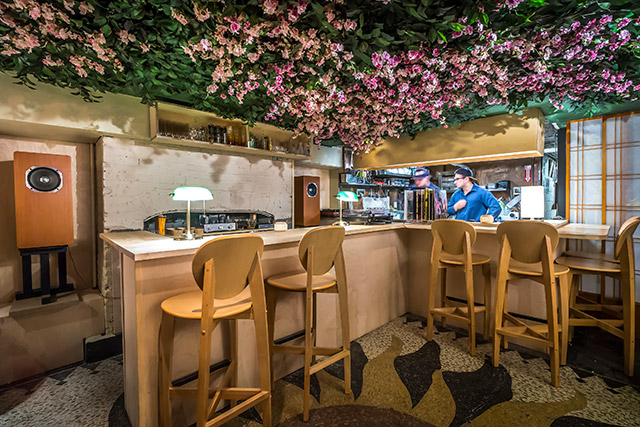 Tokyo Record Bar: This hip, basement izakaya located beneath Air's Champagne Parlor calls itself a "jewel box of vinyl." It hosts two to three scheduled seatings each night for a prix fixe meal—if you score spots, you must have a reservation and you must be prompt. During dinner guests curate a custom vinyl playlist, with the music becoming a central aspect of the experience. 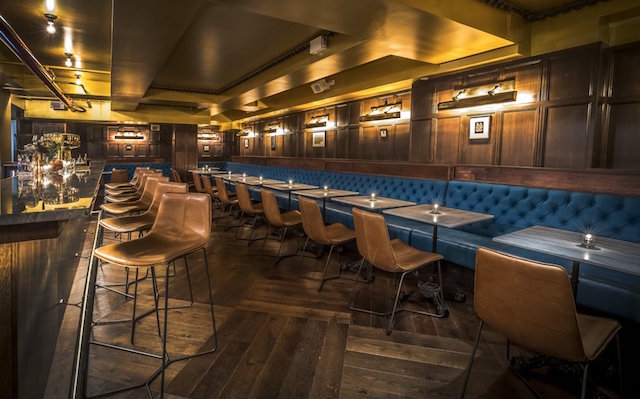 Gibson + Luce: This subterranean cocktail bar at the Life Hotel is rumored to have been a secret hangout spot for LIFE magazine staffers. According to WWD, "The 1894 Beaux-Arts building [was] designed by famed architects Carrère and Hastings (New York Public Library), was headquarters of the magazine from the building’s construction until the magazine’s merge with Time Inc. in the mid Thirties... the property’s speakeasy-inspired subterranean cocktail bar once used by the early 20th-century editorial staff of Life Magazine as a clandestine watering hole." As such, it was named after former editor Charles Dana Gibson and publisher Henry R. Luce.

Accessed via a hidden staircase next to the elevator bank in the lobby, the space has a luxe, vintage vibe (thanks to oak-paneled walls and a substantial L-shaped bar). Craft concoctions are modern riffs on classic drinks, and bar bites are an extension of the creative bistro fare from Henry, the hotel's main restaurant. 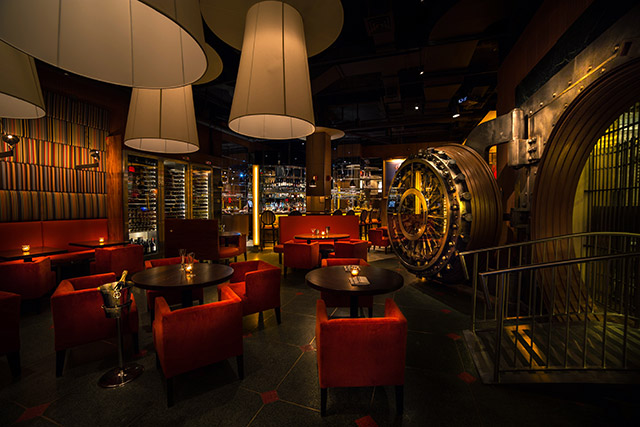 Butcher & Banker: Located in a restored 1930s bank vault beneath The Wyndham New Yorker Hotel, this self-proclaimed “steakeasy” led by Chef Scott Campbell serves up choice cuts, locally-sourced seafood, and seasonal vegetables. On the drinks front are updated versions of classic cocktails including the Cosmopolis, a Negroni-inspired creation with a cosmopolitan twist; and wines by the glass and bottle. The classic steakhouse setting, with mood lighting and deep red furnishings, is punctuated with a heavy, vintage vault door and a wall of safe deposit boxes that are original to the space. 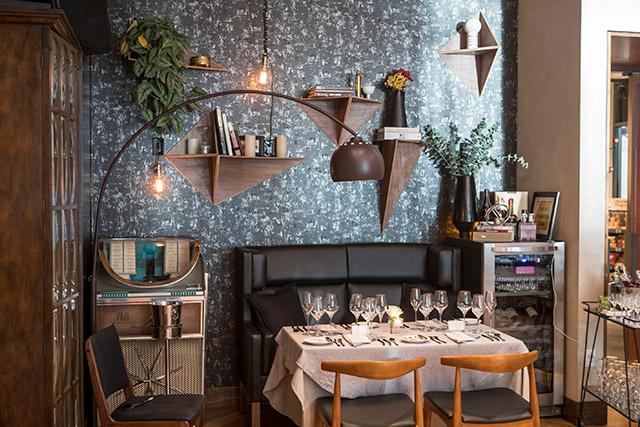 L'Appart: Walk through the sprawling Le District Market to an inconspicuous door in the passageway between the “garden” and “market” districts to find the Michelin-starred L'Appart, helmed by Chef Nicolas Abello (who has worked in the kitchens of Daniel Boulud, Gérard Vié, and Pierre Gagnaire). Once inside, guests are greeted with a complimentary cocktail and led into the 28-seat space that's designed to feel as if you're dining in a chef's apartment, complete with an open kitchen. A seasonal tasting menu highlighting classic French techniques is served with optional pairings. 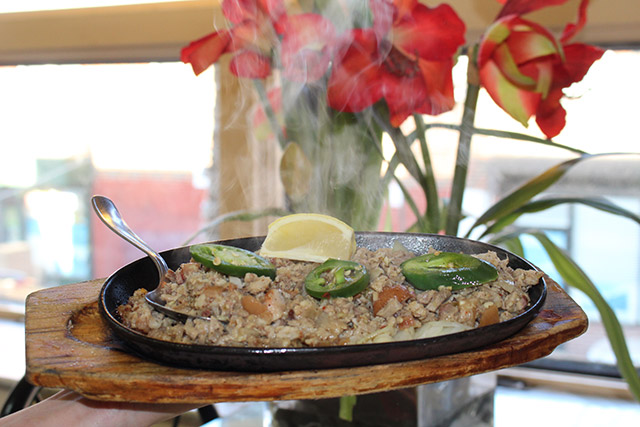 A dish at Ihawan (Geroma Cuevas)

Ihawan: On a residential street in Woodside, off a slice of Roosevelt Avenue dotted with other Filipino eateries, lies this long-time local fixture featuring traditional dishes. Opened in 1995 by Baby and Pito Bacani and now run by their daughter, Jackie, the second-floor dining room is simply outfitted, which only adds to its charm. Try the pork barbecue (the house specialty), kare-kare (oxtail in peanut butter sauce), and lumpiang Shanghai (fried spring rolls). 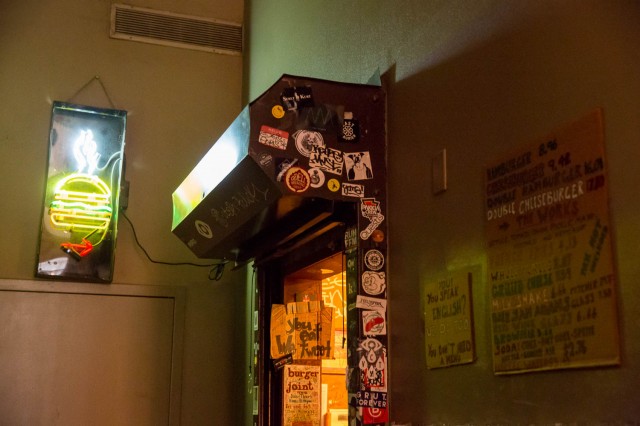 Burger Joint: The secret is pretty much already out on this cash-only haunt hidden behind a set of red velvet curtains at the upscale Le Parker Meridien hotel, but you can probably still find one friend who doesn't know about it to impress. Inside you'll sometimes find a line of burger-hungry patrons waiting to gain access to this hideout covered in customer scribblings, old movie posters, and framed newspaper clippings. The go-to move is a burger with the works (lettuce, tomato, onion, sliced pickles, mustard, ketchup, mayo), with french fries, whole pickles, wine, beer, and milkshakes rounding out the meal. If waiting on line isn't your thing, avoid peak lunch and dinner hours. (See more photos here.) 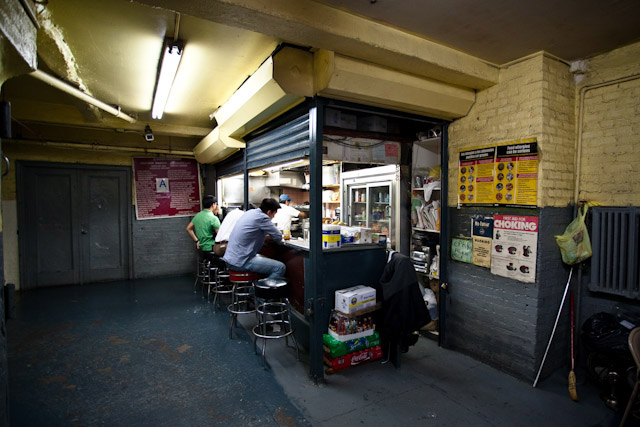 El Sabroso: This Latin American lunch counter may be tucked inside of a loading dock in Midtown, but it's completely legit. Inside, you'll find a handful of bar stools and a small table in a dimly-lit space where comfort bites like pernil (roasted pork) and pollo guisado (chicken stew) with rice, red beans, and a salad are all served on styrofoam plates with plastic utensils. El Sabroso is as no-frills as they come, but a solid affordable lunch option in this part of town. 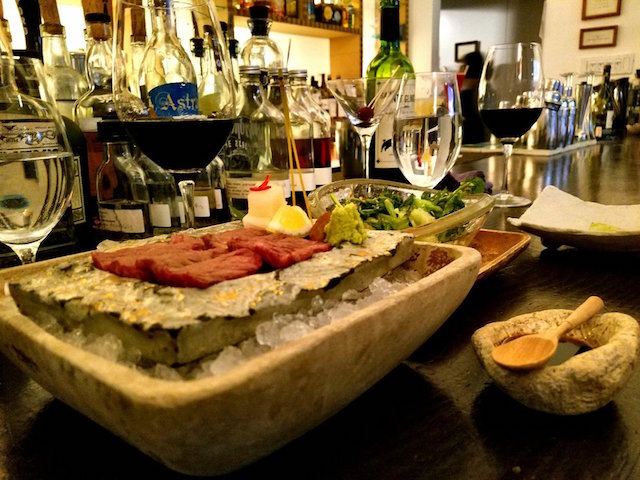 Bohemian: You need a referral to dine at this Japanese eatery, but from what we've gathered from those that have been clever enough to secure a reservation, Bohemian is worth the effort. The vibe is intimate and cozy, with low tables and lounge chairs set in a softly-lit space. There are some solid steaks on the menu, as is expected given its location behind the Japan Premium Beef butcher on Bond Street, as well as a recommended tasting menu.

Abigail Abesamis is a food and travel writer living in Long Island and working in Chelsea. Find her writing on abigailabesamis.com and keep up with her latest adventures on Instagram.