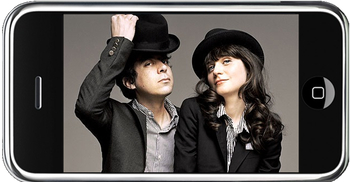 Listen, we'd all like to capture a piece of happy-go-lucky Zooey Deschanel's glowing soul, but she has politely requested that you leave her soul (which is insured for $1 Billion USD, 4 double rainbows, 18 watts of pure sunshine, and just a tiny flame of hellfire) in tact. Also, please leave M. Ward's soul alone, too. His is more solemn, tortured, and probably weepy at times, but some people are into that, and those people should leave M. Ward's soul be.

While the "He" in She & Him has been camera-shy in the past, reportedly the band's manager specified it was the "She," Zooey, who didn't want to see technology out at concerts, saying: "Zooey doesn't want to see phones!"

So, if you're attending She & Him's concert in Central Park tonight, power down your soul-stealing mechanisms and enjoy the experience IRL. If not for the band, then do it for all those other precious souls in attendance.

#concert
#iphone
#M Ward
#photos
#rules
#She and Him
#Zooey Deschanel
Do you know the scoop? Comment below or Send us a Tip