Before she's even turned thirty, Zooey Deschanel has put together a commendable career in the decade since making her film debut in Mumford. She is an Angelino born and raised, but anyone who has seen Elf knows that she has enough attitude to hold her own in the Big Apple. She'll be doing just that in her upcoming film Gigantic, a romantic comedy set in the city, which she co-stars in with "Little Miss Will Be Blood"'s Paul Dano (trailer). This week she talked with us about the need to break rules you make for yourself, why being an actress is actually a good way to look unattractive and whether or not her straight-to-video career will begin with Elf 2.

I read that the writers of Gigantic wanted to "take the little things that are often found in literature and bring them to film." Do you think they accomplished that? It's hard to say because they are such different mediums, but the script worked beautifully and I think they created characters that were better or complex and poetic so, sure.

Did you feel that this idea and character made you approach the role any differently than you normally would? I just sort of had an immediate reaction. I felt that there were certain ways that she might move and interact with people and talk. You don't always get so many clues from the script but this was a very evocative script.

And you shot this in New York? How was your experience being in New York? We were there for maybe a month and a half. It was great. I love New York. I've worked there a lot and I feel really comfortable there. It's sort of like if I'm not going to be in LA, if it's going to be somewhere else, then New York is probably closest to feeling like I'm at home I could find.

That's nice to hear as a native. What neighborhoods were you shooting in? We shot a lot around the Dumbo area, kind of. I can't remember all the different neighborhoods. I don't know Brooklyn that well, so I was getting a little bit of an education. We had a couple of scenes in Queens and we shot some of that mattress stuff in Dumbo. I remember people on the crew who lived in Brooklyn could go home for lunch and knew where the restaurants where so it was good. And then we shot a little bit in Soho and stuff like that. 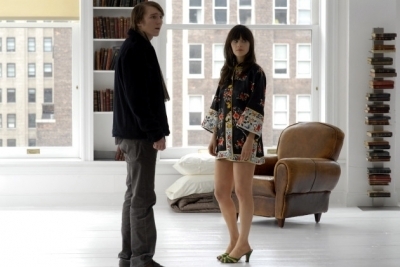 Did you feel like its portrayal in the movie felt real to you, compared to living here, being around here and seeing it versus the movie? What I like is that you have cities that have been portrayed in so many films and you have the ability to sort of approach it with new eyes. I like that we shot a lot of it in Brooklyn and it wasn't exactly the New York you always see, but it was still New York so it was nice.

Did you have any noteworthy "only in New York" experiences that come to mind? I have to think, sometimes I have a hard time opening up files in my brain. New York. It's definitely kind of amazing how much more interaction New Yorkers get. Even though nobody wants to look at each other when you go down the street, you end up having so much more contact with people—it's weird. Like the contact might not be friendly, but you're always encountering other people. So it brings out some interesting encounters, but I can't think of anything right this second.

Do you have any favorite movies shot in NY that come to mind? Immediately Annie Hall, all the Woody Allen movies, you know. Obviously not every one takes place in New York but a lot of them do. That's the first thing. And Midnight Cowboy.

Woody Allen movies make me think of the restaurant Elaine's that's in them. I'm thinking about taking my next first date to Elaine's. Yeah, I know that place. That's a cool idea. That's a good one, yeah.

One of my favorite New York and Christmas movies is Elf. Oh thanks!

Would you ever do an "Elf 2" without Will Ferrell? Um, it wouldn't be Elf!

But you see some of the stuff that goes straight to video, you know? I don't think I could ever do a second movie without Will; he's the whole heart and soul of that movie. Everything about that film was really fun to make and it was such a great cast in general, but Will was the center of it and I can't imagine coming up with a story that would work without him. Yeah, I don't think so.

Good. I'm going to hold you to it. You won't catch me in an Elf 2 without Will Ferrell. Elf 2: Electric Boogaloo

It always starts on a high note. Yeah, you know, I don't want to start my straight-to-video career with a sequel.

When you were in town shooting, did you do any She & Him (her band with M. Ward) shows? Not while I was in town shooting. I actually flew out while we were shooting to South by Southwest last year, but I have done a few She & Him shows in New York.

Has it been difficult juggling the two careers? No, it hasn't because there's always ebbs and flows and you need that break for both of them. And they do different things and they inform each other so I feel really fortunate that I've been able to do both.

I'm glad it's been such a success. It's so easy when you hear about actors doing music projects to be skeptical. You wanna punch 'em, right?

Exactly, you wanna punch 'em! People are like, "Get the hell outta here."

That record is coffee shop approved in New York, I gotta tell you. I hear it in coffee shops a lot. Oh nice, that's so cool. I never thought, you know—it always seemed like a silly thing to hold against somebody. Like, 'You can't do this because you're an actor!' You just make sure your intentions are pure and sincere and then I don't think you can go wrong because if you're doing something for yourself, which the ultimate goal always is as an artist, then you don't need to worry about anything. Except for money, I guess.

Was there any music you were listening to while shooting the film? Actually, my iTunes will tell me. Oh no, I can't find it!

Do you tend to listen to certain music for certain roles? Yeah I do, I tend to make playlists for parts. I'm not always, I'm not a person who's like, "Every time I do this, I do this." The moment I start to make a rule like that for myself, I'll rebel against it and be like, "Nope, not this time."

So living in LA, there's a lot, if I may say "genetic freaks" out there, models doubling as actresses. Do you ever find yourself hanging around "normal people" to remind yourself how gorgeous you are? Well, I really think I'm a very normal person and most the people I'm friends with are not actors. I mean I have some actor friends but I have a pretty good mix. I feel like a lot of the idea of the "genetic freaks" is smoke and mirrors. Yeah, there are attractive people in LA, but there are attractive people everywhere. People are just good at putting on makeup and making themselves look great all the time. One of the nice things about being an actor is sometimes being vulnerable and sometimes being like maybe I'll put myself in the position where I'm not going to look my best. And that's a freeing feeling, you know. Because I don't know how you can be an actor and want to look perfect all the time. Because if you're portraying human beings, which we supposedly are, human beings are not perfect. So that's my philosophy.

So being named after Franny and Zooey, we wanted to know how many times you had read it. Once. Just once. Maybe twice.

Are you reading anything right now? Yeah, I'm constantly reading. I read like ten books at once, I'm like one of those people. I got one of those Kindle things. So awesome. The Kindle 2. I'm reading this book called "Under the Banner of Heaven."

Do you have trouble finishing books when you're reading ten at once? When I'm reading like five books at once, I feel like I never finish any of the five. Yep, that's a big problem. But I always have tons of scripts to read to so my fun reading is books and magazines.

#elf
#gigantic
#interview
#Zooey Deschanel
Do you know the scoop? Send us a Tip