Were you one of the thousands of Game Of Thrones-obsessed New Yorkers who didn't get a chance to get an Iron Throne photo in Queens last weekend? Your chance to sit on the Iron Throne may have passed for now sadly, but there's still an opportunity to take a photo or two with an Iron Throne—and it's a ginormous one at that. Or as they say in High Valyrian, valar bigassthronus. 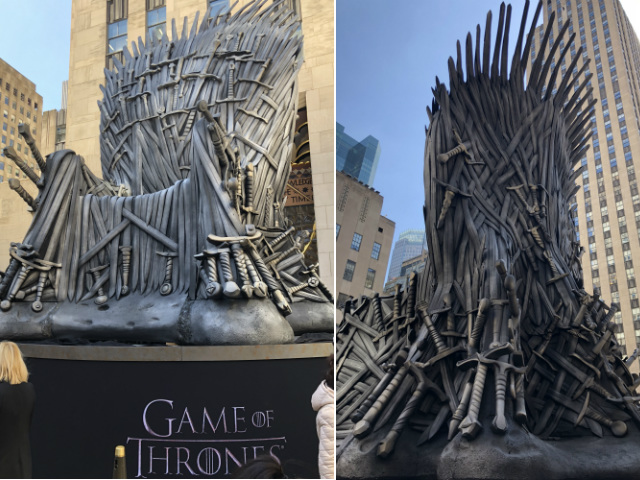 The front and back of the throne (Ben Yakas/Gothamist)

HBO has wedged a larger-than-life Iron Throne at Rockefeller Center, between the rink and the Comcast Building. The throne, which was made in L.A. and then deconstructed and reassembled here on Monday and Tuesday, stands at 35 feet tall and weighs around 20,000 lbs.

The throne is there for the premiere of season eight of GOT, which is happening tonight, so you only have til about 6 or 7 p.m. to head over there and get a photo in. At lunchtime on Wednesday, there were literally hundreds of people gathering around to take photos of the sword-heavy structure. You're not supposed to climb on it—there are a few security guards milling about keeping an eye out for any ambitious free solo types—but you are encouraged to take all the selfies you want. 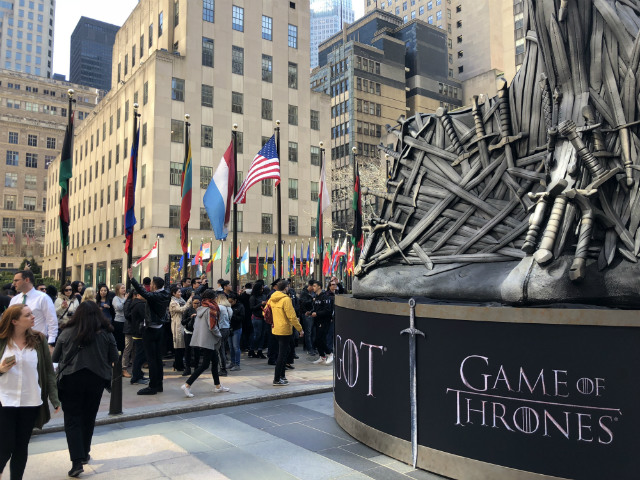 A security guard also told Gothamist that a giant dragon (presumably not real, but who is to say?) is supposed to be coming later today as well in honor of the premiere, and will be set up right next to the Iron Throne, so that's something else to watch out for.

And across the street, you can see the setup for tonight's red carpet. 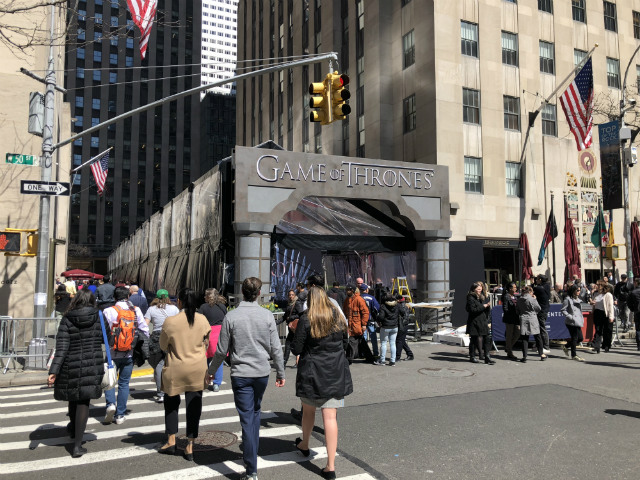 Star Kit Harington will be back at 30 Rock this weekend to host Saturday Night Live, who released a very amusing promo today for the episode featuring GOT superfan Leslie Jones living out her Jon Snow fantasies (which includes pelting him with donuts a la Cersei's walk of shame from season five).

#30 rock
#30 Rockefeller plaza
#game of thrones
#got
#HBO
#iron throne
#midtown
#original
Do you know the scoop? Comment below or Send us a Tip