Now that we know all about the Brooklyn Cyclones it's time to learn about their compatriots to the northwest: the Staten Island Yankees. The Short-Season Single-A team only plays for a few months each summer and while they don't have A-Rod—though the SI Yanks count guys like Robinson Cano and Brett Gardner as alums—it's absolutely worth experiencing a game at the stadium.

The views of sparkling lower Manhattan are unparalleled, the foul balls excitingly dangerous, and you can get right up to the action without parting with a month's paycheck. So put on some pinstripes and hop the ferry because the Richmond County Bank Ballpark is where it's at. 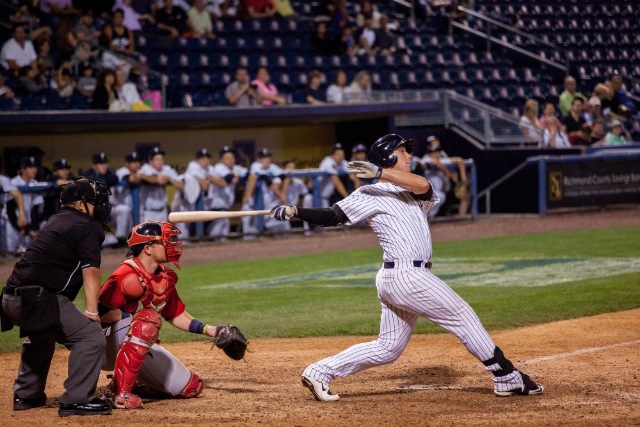 THE GAME Minor league games are a great way to introduce a newbie to the sport while also remaining fun and relevant for longtime fans. For the former, smaller stadiums mean getting closer to the action and given the more relaxed environment in the stands, visitors to the Richmond County Bank Ballpark can often walk right up to the first row on lower attendance days. Minor league games also tend to be shorter, so it's a good way to dip your toes into the sport.

For folks who regularly attend or watch games, there's still plenty going on to keep the mind amused. This year, left fielder Griffin Gordon (#11) is leading the team with a .357 batting average and 22 hits at 63 at bats; the 23-year-old leftie from Alabama is celebrating his second season with the SI Yanks. But we're told that short stop Kyle Holder (#14) is the player to watch this season. The 21-year-old All-American from U San Diego was the New York Yankees' 2015 first round draft pick. 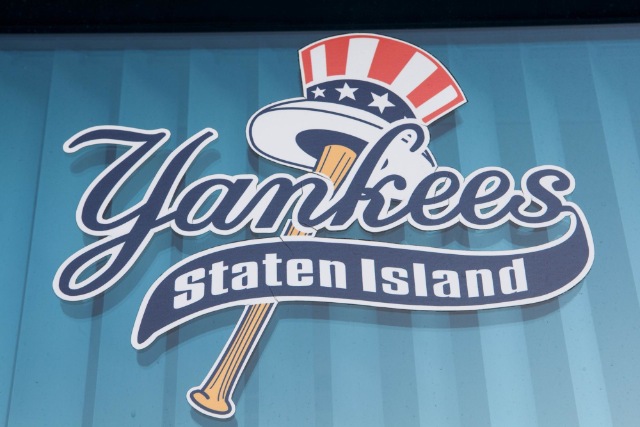 TICKETS Getting tickets to game is generally easy unless it's a Friday or Saturday night game against the Cyclones. There are three ticketing levels, from $9 to $15 to $18 on the field level depending on what section of the stadium the seats are located in. For singles, doubles and small groups, this is probably your best bet. You can almost always walk up to the window at the ballpark to buy tickets—especially mid-week—and you avoid that irritating Ticketmaster fee, too!

If you have a larger group of, say, 20 friends you should absolutely opt for a Luxury Suite, which gets you great drink deals, an air conditioned room with couches and a private outdoor viewing area with seats. It's also the only place in the ballpark where you can score wine and spirits!

The base level "Room With A View" option includes AYCE hot dogs, burgers, chicken sandwiches and popcorn, plus AYCD soft drinks. For an additional $375 (Bud Light, etc.) or $425 (premium beers like local Flagship Brewery), they'll even throw in a keg for the room. If you get the max amount of guests (20 plus the option for four more to purchase regular tickets and hang in your room), that's around around $55 per person, which is significantly less expensive than buying fistfuls of hot dogs, beers and sodas on their own.

Bonus: As a suite guest, you're guaranteed a visit by mascot Scooter at some point in the game. Double Bonus: If you don't care about the game (monster), there's cable TV in the room as well. 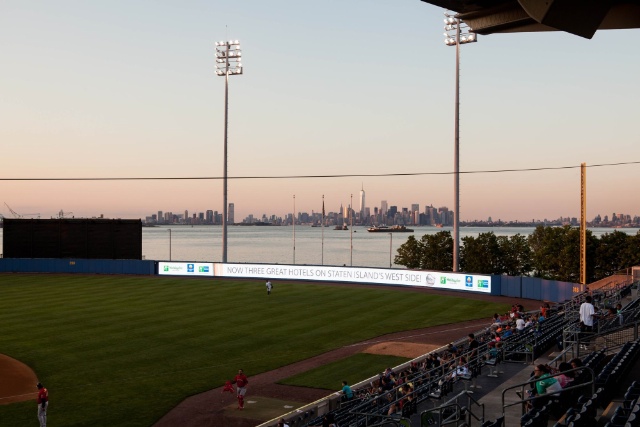 THE VIEW There's perhaps no better selling point for taking in a game than the stellar views of Manhattan afforded from the stands. On a clear day or night, you can see across the narrows to Lower Manhattan—where One World Trade Center brilliantly reflects the light of the setting sun—Brooklyn and, yes, New Jersey. While the stadium is small enough to walk easily, try to score seats on the first base side of the stands, where you can admire the skyline while on the lookout for foul balls screaming towards your face. 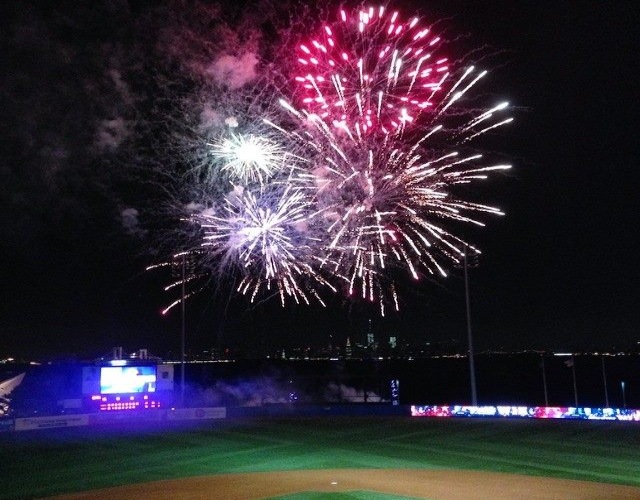 THEME NIGHTS Because games are not as well attended as the majors, there are lots of themed nights at the stadium to entice in larger crowds. They do simple things like raffles or a free cap plus more involved takeovers, like the upcoming Meet George R. R. Martin Night—feel free to confront him about why this next book is taking so freaking long—on August 8th, Staten Island Star Search (yassss) on August 15th and Irish Heritage Night on August 28th. Following those (and all Friday and Saturday night games) there are post-game fireworks that explode over center field with the Manhattan skyline as a backdrop. 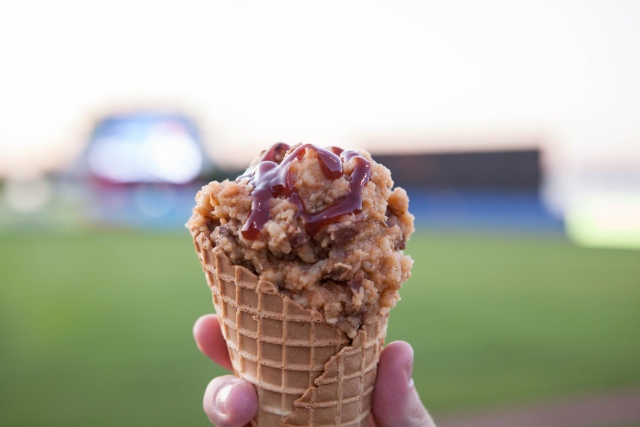 THE FOOD If you're down for a Nacho Helmet, they've got you covered, and they're also offering some other interesting and tasty ways to sop up all the baseball beers ($7 for an aluminum bottle of Bud) you'll be drinking. Local pizzeria favorite Pier 76 has an outpost here, offering slices ($5), lobster mac and cheese and other Italian-esque specialties. Over in right field, The Irishman's Bar-B-Q vends standard smoked meat options or you can get their BBQ Chicken & Smoked Mashed Potatoes in a Waffle Cone ($7.50, pictured above) if you're feeling adventurous.

They have standard ballpark fare too, of course, whether you're a popcorn person or a hot dog lover. For the latter, each year the team hosts a contest for fans to create their own specialty dog. For this year, that's the Shiloh "Carolina" Dog ($5), which tops a Sabrett dog with chili, cheddar cheese, onions, mustard and crushed potato chips. Keep that ingredient list handy when you order, as there's sometimes confusion about which dog you're talking about. 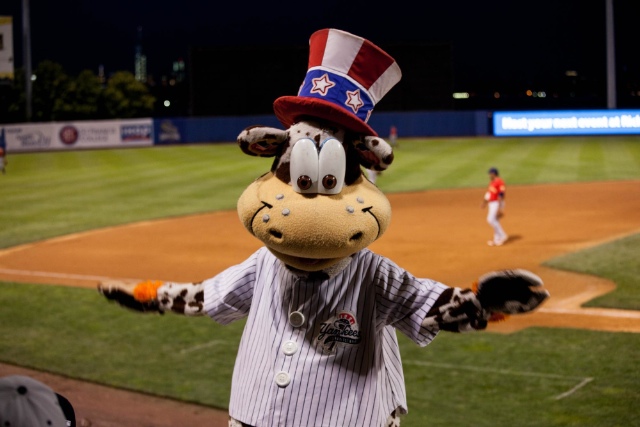 THE MASCOTS After 13 years as a New York Yankee, Phil Rizzuto, aka "The Scooter," went on to a 40-year career as an announcer for the team, where he was often heard exclaiming his trademark, "Holy cow!" His legacy is remembered in the form of Scooter the "Holy Cow," a nine-foot-tall, Uncle Sam hat-wearing bovine who serves as the mascot for the Staten Island Yankees. Though he's jovial with fans when he meets them in the stands, Scooter has a bit of a reputation for competitiveness when it comes to on-the-field games played between innings. This reporter may have seen Scooter push over small children on several occasions in order to win a relay race (all in good fun, of course).

But mostly he's just an enormous cow who can be seen escorted by special handlers, taking pictures with fans and being a general ham—err—steak? Depending on the schedule, Scooter is often joined by Red, another cow mascot with a bright red crop of curly hair. The two frequently engage in dance routines on the field or surprise suite guests with a photo opp.

TRANSPORTATION Richmond County Bank Ballpark is about a three minute walk from the St. George Ferry Terminal on Staten Island, so grab a date, hop on a boat (they run every half hour from Manhattan until 1:30 a.m. and until 1 a.m. on the Staten Island side) and hop to it.

Richmond County Bank Ballpark is located at 75 Richmond Terrace between Wall Street and Hamilton Avenue on Staten Island. Here's the full 2015 schedule, including away games.