We're almost halfway through the Brooklyn Cyclones' summer season—that three-month stretch when starry-eyed MLB hopefuls are forced to compete with the sensory overload that is MCU Park in Coney Island. So, have you rooted for the home team yet this year, Brooklyn? The tickets are cheap, the Thunderbolt loops behind the outfield, and the Brooklyn Beach Bums dance on top of the home-team dugout—just a few of the reasons we're urging you to head out there.

So skim our guide, pick a home game, and declare your allegiance (unless you want to wait until you've read our Staten Island Yankees guide, coming up tomorrow). Here's what you'll need to know before swiping your MetroCard: 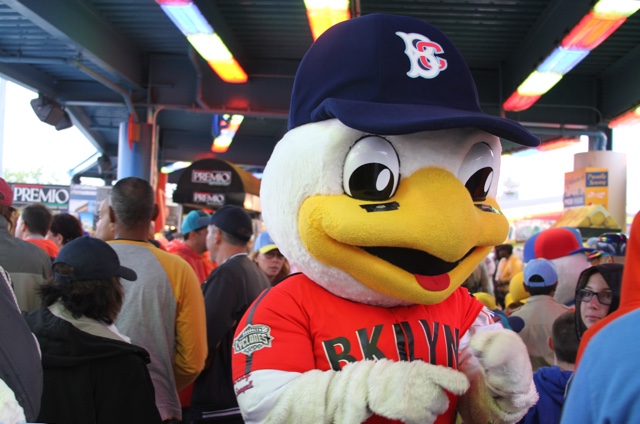 THE TEAM The Cyclones are the Mets' single-A affiliate—part of the Mets' organization, they play only 75 games a season, between June and early September, and are drafted from a pool of college-age recruits (Mets centerfielder Juan Lagares played for the Cyclones, as did infielder Lucas Duda). They're part of the New York Penn League, which covers the whole Northeast, including the Staten Island Yankees, Red Sox-affiliated Lowell Spinners, and the Oakland A's-affiliated Vermont Lake Monsters.

THE PLAYERS Third baseman David Thompson is the most hyped on this year's roster, since he led the country in home runs and RBIs at the University of Miami last year. Cyclones' communications director Billy Harner says that second baseman Vinny Siena, who was drafted from UConn and is "small and scrappy," has also been a hit with Cyclones' fans.

TICKETS Prices max out at $17, for the front row behind home plate ("That's what you pay for parking at major league games," Harner is quick to point out). The average ticket is $10, which gets you a reserved bleacher seat. Be sure to buy in advance online, since tickets are $2 extra the day of the game. And if you can, go on a Wednesday, when every ticket in the stadium costs $10. 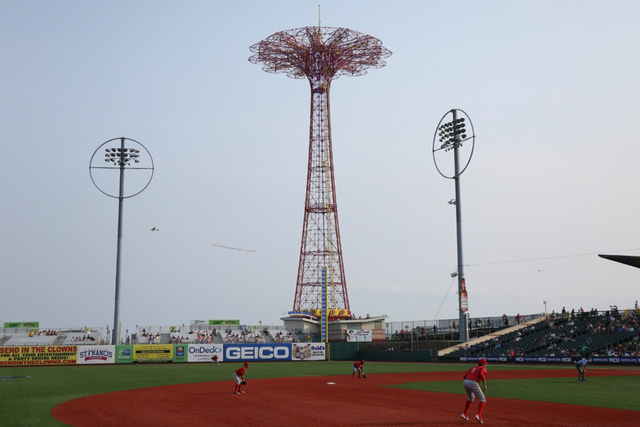 SEATS The third base line has the best views of the Parachute Jump, especially sections 15 and 17 on the far side of the visitor dugout, which aren't blocked by stadium netting. Stake out the first base line, or the section behind home plate, for a full panorama of the Thunderbolt. As for committing to your reserved seat: we've found that it's relatively easy to move a few rows down between innings, as long as you're willing to retreat if the rightful occupant comes back with a hot dog. Still, since the park is only 20-rows deep, any seat in the house will give you a clear shot of the action on the field. 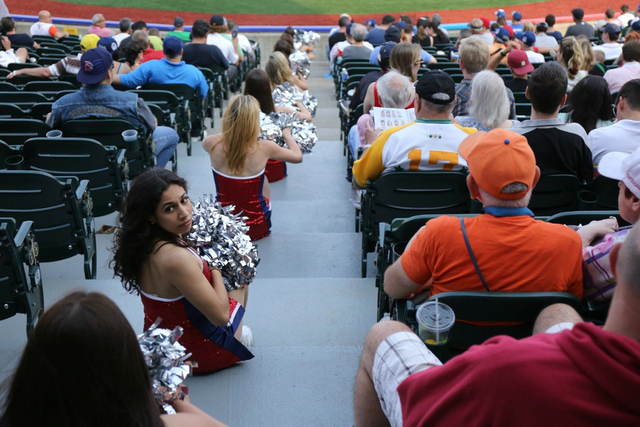 THE BEACH BUMS The Cyclones' 12-woman dance team (their name is a nod to "Dem Bums," an affectionate 1930s nickname for the Brooklyn Dodgers) is an anomaly in the New York-Penn League—while the Staten Island Pin Stripe Patrol only steps onto the field occasionally, these dancers spend each home game bouncing between the field, the bleachers, and their home-base on top of the Cyclones' dugout. They also perform one longer choreographed dance per game, in center field, heavy on the air snaps and hair flips.

MASCOTS Sandy the Seagull has been around since the team was founded in 2001, and is named after Sandy Koufax, who pitched for the Brooklyn (and then Los Angeles) Dodgers from 1955 to 1966. Pee-Wee, a smaller seagull who wears a beanie instead of a baseball cap, was introduced in 2003 to appeal more directly to kids (he's named after 1940-58 Dodger's shortstop Pee Wee Reese). In addition to tossing t-shirts and obliging photo pops, the mascots race kids around the bases at the end of each game.

MC KING HENRY Brooklyn-born Guy Zoda was already the star of the community access King Henry Show when he started attending Cyclones games in his red suit and crown in 2001, mugging for the cameras. The team finally hired him in 2010, and he's been the stadium's MC ever since. He also oversees the between-inning dizzy bat competition (two fans spin around 10 times each and attempt to run a base line without falling over) and the water balloon home run derby. 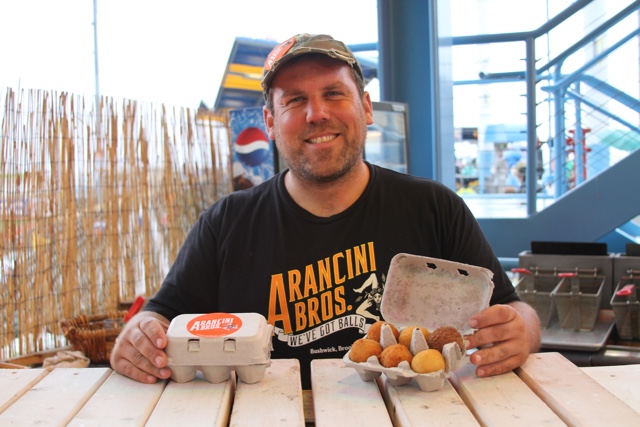 FOOD Bring $15 for a meal and dessert—not bad, considering the new Brooklyn Flea-esque concessions sold alongside standard Nathan's ($4, $5.25 for a footlong), cotton candy ($4), and beef, turkey, and veggie burgers ($6).

Arancini Bros. of Bushwick has 6 different crispy rice balls (3 for $6, 6 for $10), which come packed in mini egg-cartons. We liked the classic Italian ball with saffron rice, mozzarella, meat sauce and peas, while the Beach Bums we spoke to are into the Nutella ball (rice soaked in milk, sugar and cinnamon). Just be warned that all rice balls look the same, and try to avoid a mouthful of cinnamon when you're expecting ragout, or vise versa.

Pig Guy NYC's maple-syracha bacon-on-a-stick is insanely rich and a little too gimmicky for our taste, but the Tacos El Tigre pork tacos are pretty perfect, albeit much spicier than anything we usually associate with a baseball concession stand. For dessert, we suggest the Cool Supplier's black cherry ice pops ($3).

And for the brave, The Cyclones staff just dreamed up a gut-busting signature hot dog, set to debut this Thursday. The new chorizo dog, nestled in a pretzel bun, is stuffed with provolone, topped with pulled pork and a fat slice of bacon, and drizzled with barbecue sauce. "It's one of those things that people will buy, but they probably shouldn't," dinning GM Vincent Vazquez told us. "Our Vice President tried it, and then he got sick." You can pick it up at the Pig Guy stand—ask for the Big Bad Wolf and be prepared to fork over $14. 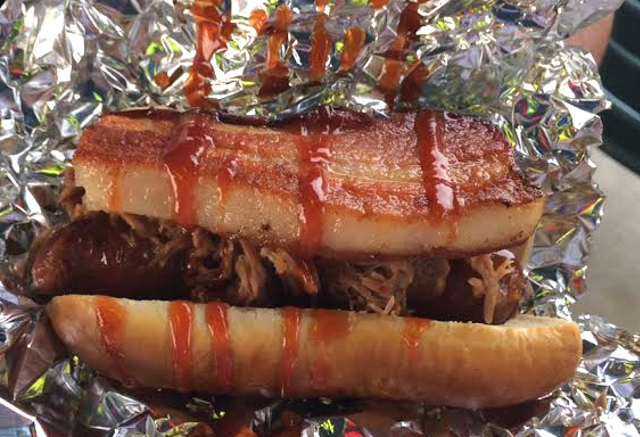 DRINK This season, MCU Park expanded its standard can and bottle offerings. On top of Bud, Coors, and Coors Light ($7.75), Brooklyn Summer Ale and Heineken ($7.75), you can now pick up drafts, bringing the total beer list up to 20 options. In addition to Coney Island Brewery's Coney Island Lagger and Mermaid Pilsner, there's Brooklyn Brewery Green Market Wheat, Angry Orchard Cider, and even a gluten-free Redbridge (all $8 for a 12 oz.)

Coney Island Brewing Company is also set to open a street-level outpost on the Surf Avenue side of the park by August 1st, which will make MCU Park the second baseball park in the country to have its own brewery, after Durham Bulls Athletic Park in North Carolina. And while you can't access the brewery from inside the stadium, there are already portable beer carts on the concession deck.

For wine and spirits, Wine Drives and Short Hops off the main lobby has chardonnay (from $8), well drinks ($10), and, if you're feeling particularly high-low, martinis ($12).

FIREWORKS Every Friday and Saturday night after the game, all season long. The Friday fireworks are sponsored by the Coney Island Alliance and shoot up over adjacent Luna Park, while the Saturday fireworks are the Cyclones' own, and burst right over the stadium.

TRANSPORTATION MCU Park is two blocks east of the Coney Island-Stillwell Avenue stop on the D, F, N, Q, right next to Nathan's Famous. The ride is about an hour from Midtown, but if you have an extra half hour, get off three stops early at Brighton Beach, and walk east along the boardwalk. You'll know your close when you reach Steeplechase Pier—the 35,700-square-foot walkway juts out right by MCU's back entrance.

MCU Park is located at 1904 Surf Ave, between West 16th and West 19th Streets, in Coney Island. Here's the full 2015 schedule, including away games.

#Beach Bums
#brooklyn cyclones
#coney island
#MCU Park
#Sandy the Seagull
#original
Do you know the scoop? Comment below or Send us a Tip