As has been factually established many times over, New York is *very good* at conjuring up Halloween frights: Here we have this Prospect Park (murder) house, fully decked out in every kinda nightmare decoration I can think of; this bloody Boerum Hill tableau ft. a deranged pumpkin dentist and his spooky squash entourage clamoring for HUMAN TEETH; skeletons scrambling up the sides of Carroll Gardens homes; and an always haunted subway system.

But the perhaps the most frightening fright of all arrives in the form of costumed hordes, scheduled to descend upon the greater Greenwich Village area tonight for the annual Halloween parade.

Between 7 p.m. and 11 p.m., be sure to avoid or flock to the following streets, depending on your level of comfort with crowds:

If that does not make much sense to you, here, look at the map you gourd head: 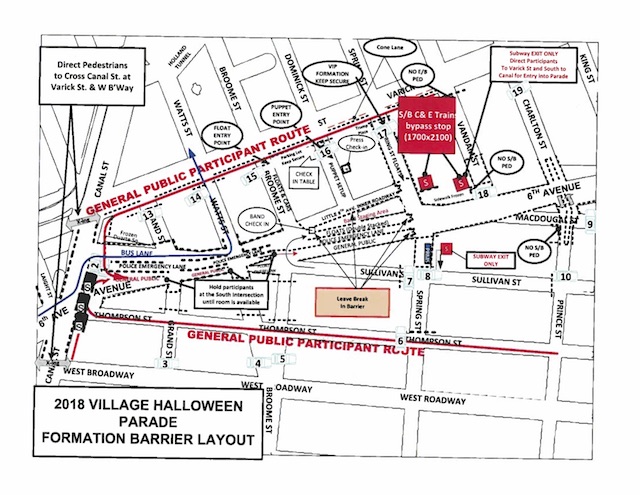 Please note that, if you would like to join the parade, you can't just go jumping over the barricades and throw yourself into the throng. This is controlled chaos, and the parade's organizers have laid out instructions for participation. First things first, you must wear a costume. This is non-negotiable. And although the route runs along 6th Avenue from Spring Street to 18th Street, in order to actually be part of the parade, you need to join the queue at Canal Street and 6th Avenue, between 6:30 p.m. and 9 p.m. (The coordinates for the meeting point are 40.7218599,-74.0053841, if that kind of thing helps you get around.)

If you and your ghoulish goodtime buddies intend to march as one, you'll probably do best to assemble at another location and present yourselves at the meeting point en masse. As the website notes, "You can only enter this area from the EAST and SOUTH. That is Sullivan, East Broome and Canal Streets. If you come from the West, enter ONLY from Canal Street." Follow directions or risk being bamboozled.

Please note that, as parade time approaches, the West 4th Street subway station tends to transform into an overcrowded horrorshow. Consider arriving at an alternative station, like Spring Street or Canal. And please also note that due to this being the one-year anniversary of the West Side Highway terror attack, NYPD presence will be heightened.

Did you know that the Village Halloween Parade has a theme? You probably did, but perhaps you did not know that this year's is "I AM a robot!" Apologies for not telling you sooner, because you likely don't have enough time to adjust your costume plans before "the nation's most wildly creative publicly participatory event" kicks off in mere hours. Consider this our trick to you!

As for treats, the MTA has benevolently decided to let you have nighttime L service just this once, and we put together a fun little primer on spooky events taking place across the city this week. It has been my experience that, on all party holidays, the mandatory purchase of a ticket exponentially increases the odds that an event will suck, but hey I have no idea what you're into! If trespassing—something I would never encourage you to do—is more your bag, you may be aware that gate-crashing house parties becomes much easier when everyone is wandering around in a costume. You may also be aware that bringing along some kind of contribution makes your unasked-for presence more palatable to your unwitting hosts. Again, I don't know what you like to do with your time! If you'd prefer to stay in and let a streaming service scare the bejesus out of you, may I recommend an occasionally-hokey-but-mostly-good piece of Netflix programming, The Haunting of Hill House?

Have you decided on your costume yet? Do you want some inspiring ideas? Let us turn to Twitter for a brainstorm.

Terrifying your peers never gets old:

Bringing back one of the best Halloween costumes. #Halloween pic.twitter.com/hJ1yxU2rKx

Having dressed as A Dad in years past, I can attest to the amazing practicality and ease inherent in this costume, and 10/10 would recommend:

What’s the best couple’s Halloween costume you’ve seen? My girlfriend and I got a pretty good suggestion of “A Dad” and “The Bat He is Desperately Trying to Get Out of the House.”

The terror is way too real:

Made the scariest costume I could think of. (Clive hooked it up to an Arduino device so the needle actually moved randomly.) pic.twitter.com/93Vo0KTtDK

WHATEVER YOU DO, GO BIG OR GO HOME:

#halloween
#halloween costumes
#halloween decorations
#parade
#spooky
Do you know the scoop? Comment below or Send us a Tip