Your 2016 Summer Guide To What's New At Coney Island Although Luna Park, the Cyclone, and Deno's Wonder Wheel have been operating on weekends for about two months now, Memorial Day marked the real kick-off to Coney Island's summer season. Here's a look at some of the new attractions that opened on and around the boardwalk over the holiday weekend, a couple things still in the "coming soon" stage, as well as some old favorites that, frankly, outshine the new developments.

This open air "museum of street art" is not without controversy, as many feel the traditionally underground—and illegal—art form is being used by mega-developer Thor Industries to promote (or distract from) the gentrification of the area. Be that as it may, Coney Art Walls is back for summer 2016, co-curated by Thor CEO Jeffrey J. Sitt and Jeffrey Deitch and featuring 21 new murals by the likes of Lady Aiko, Icy & Sot, Crash, Tats Cru, Triston Eaton, Tatyana Fazlizadeh, D*Face, and Nina Chanel Abney. Most of these are already up, with everything scheduled to be completed by Mermaid Parade on June 18th.

There are also food offerings in the Art Walls lot, though last year's Smorgasburg vendors have been replaced by something called Greenwood Beach, which is organized by the South Slope party spot Greenwood Park, and includes a large beer bar as well as shipping containers housing Dinosaur Bar-B-Que, Calexico, and Table 87. 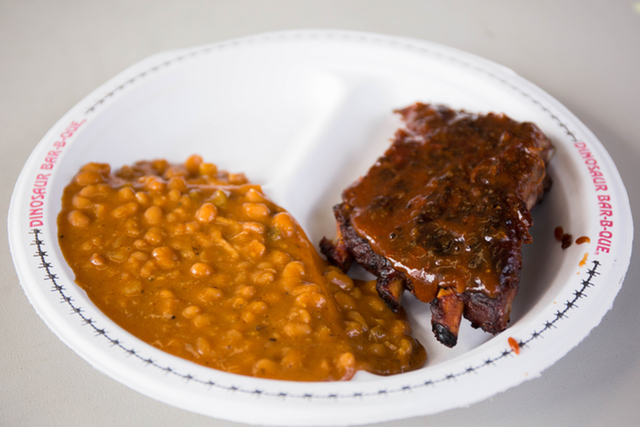 I can recommend the St. Louis-style ribs at Dinosaur ($13 for a quarter rack with one side, in my case some smokey beans), which retained their flavor and tenderness despite being cooked at some indeterminate time in the past and kept wrapped in plastic while waiting to be served, lukewarm.

For God sakes though don't get the slice at Table 87. It's one of those shrink wrapped and frozen monstrosities from which you may have recoiled in horror at Whole Foods, and tastes even worse than you would expect. If you're in the mood for actual pizza, the great Totonno's is only a few blocks away and, after 92 years, still slings one of the best pies in town. 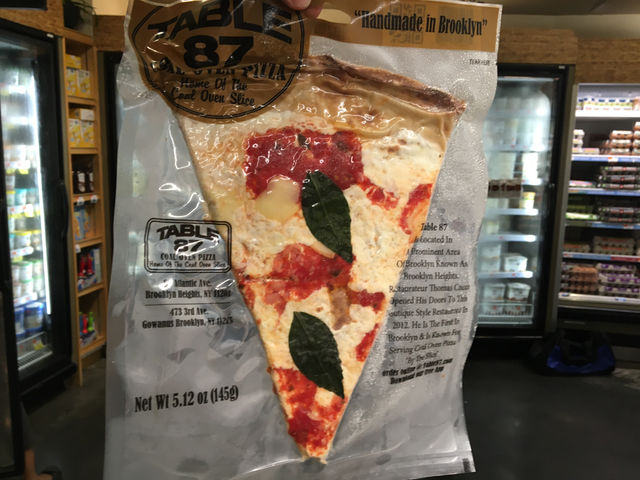 It looks like it's being preserved for a time capsule. (Scott Lynch/Gothamist) 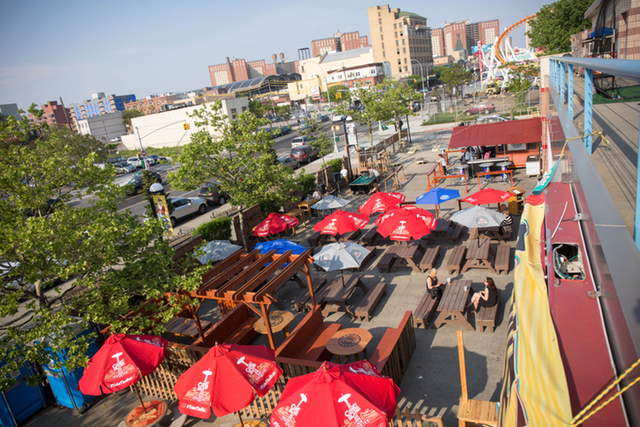 There are plenty of spots along the boardwalk to get drunk, from divey Ruby's, where some of that old Coney grit lives on and the people-watching is prime; to the generic Place to Beach, where you can swig sugary margaritas at tables out front or, inexplicably, wait on a long line to get into the walled-off patio in back (where, also inexplicably, they offer bottle service).

This summer a new watering hole joins the scene, the Steeplechase Beer Garden in the shadow of MCU Park. Replacing the more indoorsy Peggy O'Neill's, Steeplechase has a spacious front terrace with a rotating selection of a dozen craft beers, mostly from local sources, as well as ample picnic-table seating, a pool table, and a small stage for local acts and DJs. A standard bar-food menu completes the package. Seems like a solid pre- / post-game place. 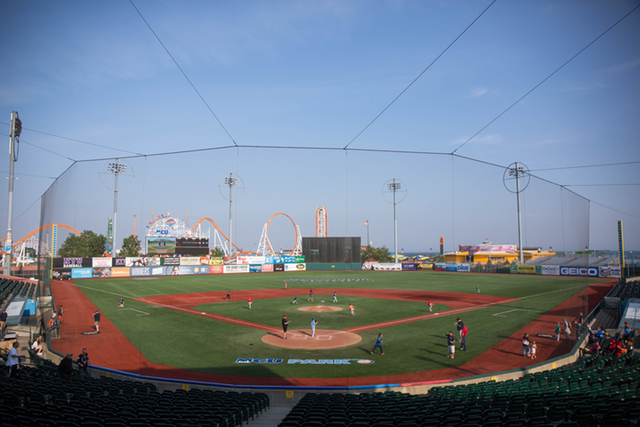 The Brooklyn Cyclones take the field for the 2016 season on June 17th, and heading out to Coney for a game—which is as much about the crazy promotions and between-inning shenanigans as it is about baseball—has become something of an NYC summertime tradition.

MCU Park is pretty tricked-out as it is, but in the offseason they took down the deepest-right-field bleachers and are currently installing Parachute Plaza, an outdoor party space with a Backyard BBQ Buffet, picnic tables, a bocce court and a corn hole set up, and a unique view of the game through a fence set directly at field level. 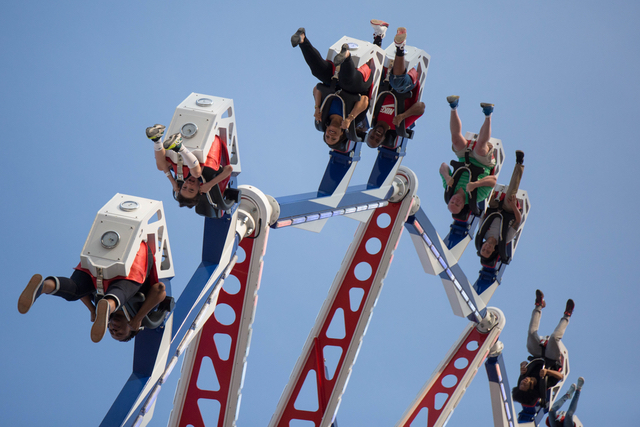 A new ride is always welcome for people who enjoy being hurtled through the air in alarming fashion, and so over the weekend the increasingly sprawling Luna Park unveiled Endeavor. A reboot of sorts of the park's classic Enterprise, the Endeavor is one of those rides that spins you around at insane speeds to make you (me) sick, but the update here is you're strapped into individual seats, and the whole thing tilts to about 90 degrees so you're flying 60-feet in the air at speeds of 25 mph while upside down. "You feel like you're about to fall out," one grinning kid said, "but you don't!" Rad, my man.

The Endeavor is located over by the Thunderbolt, and will cost seven "credits" (dollars) to ride, though on opening day they were letting people take a spin for free. There's a new kiddie ride this year too, called Convoy, which seems to be about old-timey trucks going around in a circle. Luna Park is now open every day and night through Labor Day.

The Amphitheater at Coney Island Boardwalk 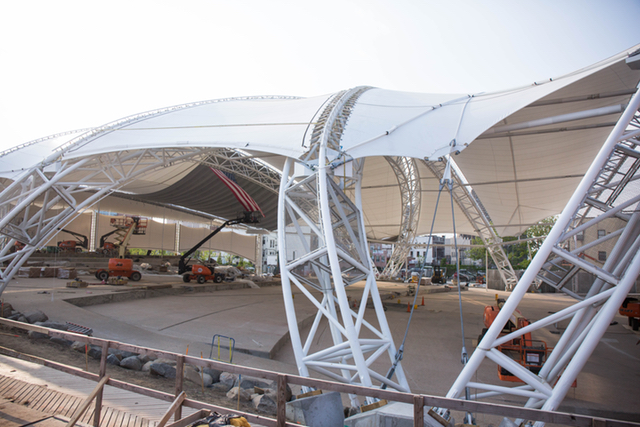 Although it's also not without controversy, the Amphitheater at Coney Island Boardwalk needs to get finished in less than month for the grand opening on June 25th with Ziggy Marley and Steel Pulse. Clearly plenty of work still needs to be done, on both the seating/standing area as well as the historic Childs Restaurant building within which the stage will be housed, but if you stand on the back of one the benches on the boardwalk and peer over the plywood you can get a sense of what the final, 5,000-capacity concert venue will look like.

Operated by Live Nation, the nostalgia-heavy lineup of summer shows includes a Sting and Peter Gabriel double bill on July 3rd, Culture Club on July 13th, Boston on August 10th, Kool and the Gang on August 12th, and the "I Love the 90s" Tour on September 2nd. The Amphitheater is located at 3052 West 21st Street and the boardwalk, a couple of blocks west of MCU Park. 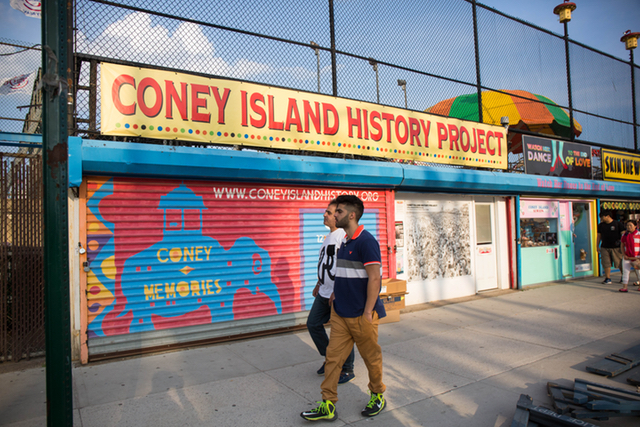 The Coney Island History Project occupies a shallow storefront near Deno's Wonder Wheel, and is always worth a visit for its artifacts and memorabilia from the boardwalk's Golden Age. Appropriately on this election-year summer, the History Project's special exhibition offers an in-depth look at the damage inflicted on the area and its people by Fred Trump, the Republican presidential nominee's father and source of his fortune. In addition to demolishing the magnificent Steeplechase Pavilion 50 years ago, Trump also made money via "racist tenant relocation tactics" that allowed him to build Trump Village. Photos, oral history, and ephemera help commemorate the Pavilion on the 50th Anniversary of its destruction. Open weekends and holidays through Labor Day; admission is free.