As anyone who has spent their subway commutes reading John Ashbery and Marie Howe's contributions to the Poetry in Motion project or staring longingly at some ancient, faded Dr. Zizmor flyer knows, we sometimes get some very clever, timeless content plastered inside our trains. Casper always has creative campaigns, sofa startups seem to get New Yorkers, and Keano offers spiritual guidance and mystery galore. But then there's the bad stuff: Seamless keeps outdoing themselves with pandering meme-drivel, the Los Angeles Tourism Board trolls NYers, and new male-focused erectile dysfunction ads with painful puns seem to pop-up daily. Love them or hate them, at least these ads all have very clear messaging.

But there is one current ad campaign that makes me audibly groan every time I'm on the train and long for the days of Lucas—and I'm not even talking about the MTA's millennial pink ghosting one! It's the city's illegal short-term rental PSAs, which I think are... an anti-pigeon disinformation campaign? Yeah, gonna go with that one.

With respect to the government of the City of New York, this ad campaign 100 percent does not make any sense and I’m struggling pic.twitter.com/tSmdJLA58d

The "Stay In The Know" campaign, which launched in late spring, is some sort of pro-snitching, pro-hotel, anti-Airbnb campaign that is completely incoherent in its messaging and imagery. Why are they trying to appeal to mass transit commuters via car traffic? It's actually very easy to find out what's causing all the traffic, as there are numerous websites and news outlets dedicated to relaying that information. And what does brunch have to do with this? 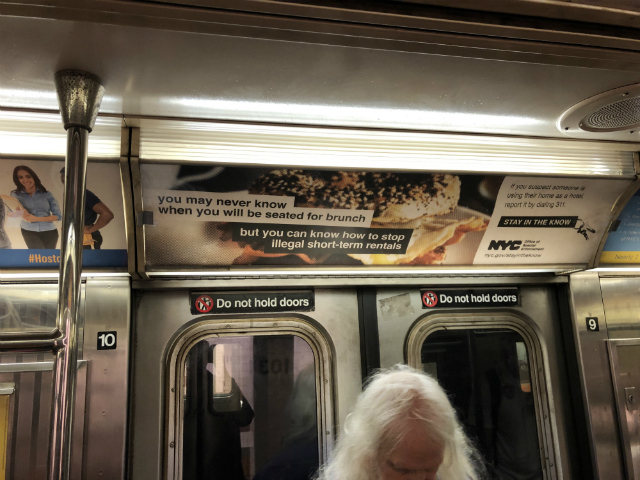 More importantly: Since when are pigeons loud??? As my colleague Claire Lampen put it, if we were to make a list of Loud Things specific to NYC, pigeons would not make the top 100—their coos would be drowned out by the passing trains every time!

But who has ever complained about loud pigeons? Does the person who wrote this copy even live in NYC? Is this another attempt by the LA Tourism Board to infiltrate and undermine the already strained morale of NYC subway commuters? Somewhere, someone in the Office of Special Enforcement is wondering right now if maybe it was a mistake to do all that ayahuasca before the marketing campaign meeting.

You may never know why we made weird ads like this

But you can know how to prevent illegal short-term rentals

AND ANOTHER THING: Every couple of days I catch a glimpse of pizza in the corner of my eye and get really excited, as I am wont to do whenever I think I see pizza, only to realize it's this ad below that has NOTHING ABSOLUTELY NOTHING to do with pizza. I'm sure there are a few people reading this who are thinking, "A-ha! You are writing about the campaign, therefore the campaign is a success!", but that is idiot logic, just like this campaign's copy. Any press is good press... except for press that completely ignores the purpose of the campaign because the campaign is too goddamn confusing and impressed with itself.

Anyway, you may never know why the city authorized such clunky ad copy, but you can watch Rachel Wenitsky's hilarious deconstruction of subway ads that make you feel bad about living here—there's no doubt that thinking about this ad makes me feel bad!

For some reason every ad on the New York City subway is like “your life here is terrible lol?” Anyway, here’s an NYC subway ad. pic.twitter.com/ENXQRLu48e

Update 6 p.m.: The Office Of Special Enforcement tells Gothamist the ad campaign was started to help NYers better tell the difference between legal and illegal short-term rentals (and how to report them). Traffic to the OSE website has apparently increased several times over since the launch of the campaign.

"New Yorkers are speaking up—not only about the ads, but also about how illegal short-term rentals are affecting their communities," said spokesperson William Baskin-Gerwitz. "It’s clear from the results our messages are working, and we’ll continue to explore every avenue to let people know how they can stand up for their neighborhoods and seek the City’s help when they suffer nuisance from illegal rentals."

#illegal short-term rentals
#incoherent copy
#subway
#subway ads
#terrible ad campaigns
Do you know the scoop? Comment below or Send us a Tip