Maybe Bill will take your picture, at least. (Photo via bossbecky's instagram)

We heard some would-be MoMA patrons grumbling over Twitter this weekend about not getting in to the Rain Room—the installation that's become to the art world what Cronuts have become to the pastry world. In fact... oh nevermind. Anyway, with the end of the installation quickly approaching (you have until July 28th), mass hypesteria has taken ahold of the city, and the city's tourists. The lines are getting so out of control that at this point all you might see is the line. If you're part of the General Public you almost don't stand a chance, and even those who have purchased an $85 membership are in for a very long wait: 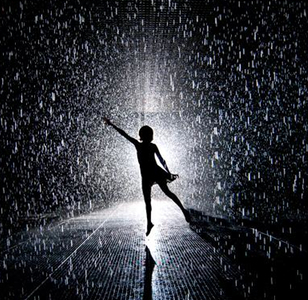 But at least you'll be warned early that you won't get in—this morning one MoMA rep told us, "The lines are closing early in the day for both members and the general public—we are still accommodating 1,200 + visitors per day, though. People are just coming earlier which means capacity is reached earlier." On Saturday, that meant that around 9 a.m. the General Public was being told they didn't have a shot of getting in. But whatareyougonnado, you know? There aren't that many solutions to this problem, aside from building more Rain Rooms.

However, as part of the General Public you're not just competing with Members... you're competing with a secret procession of VIPs. A MoMA insider told us over the weekend that some VIPs are getting in without waiting on line, just like they did for Marina Abramović: "The general public line was closed [on Saturday] because the member line was too long, wrapping around the block and then some, and became too long of a wait, since the Rain Room closes when the museum does, so there would not be time to let GP in.

"Additionally, there is a special VIP entrance on 53rd street, where the exit is, but you need a special ticket that isn't easy to get. I am pretty sure the only way to get a VIP ticket is through someone that works for MoMA. The line is going to get wild for the last week, so I wouldn't put it past them to close off the line really early in the day, or to shut it off to GP, simply just due to time restrictions."

We're dispatching someone to test out the "get there early and you'll get in" theory this week, and will be documenting every second of it. Stay tuned...