You Deserve A Vacation, So Get Up And Venture Down East

Up in the wild blue yonder, Maine locals might say their home is best described as a way of life. It's a place where the ills of city-living fizzle like fog lifting on a hot day, and peace is found among the town's lobstermen trading sea-swept tales at the corner pub. Behold ripe blueberries and hearty lupines as they grow wild in the fields, and stay awhile in a place where a good lobster roll (on a toasted hotdog bun, please) is never far away.

In true Maine-centric fashion, consider the phrase Down East. It refers to the upper coastal region of Maine, but if you ask a true down-easter, it's more about where you're going as opposed to where you're standing. Local author, John Gould, once pegged it as "a never-never land always east of where you are," but the term is actually driven by maritime winds—not geography, per se. In warmer months, New England gusts blow from the southwest, so old-time ships sailed downwind to head east—colloquially Down East. Thus, Mainers could say they were sailing up to Boston (though we all know Boston is south of the great Pine Tree State), but alas—when in Maine!

If you're looking to get out of town, the locals at Poland Spring might point you toward Maine's Down East magnum opus, which sits just off the mainland on Mount Desert Island (or MDI for short), and was named by French explorer Samuel de Champlain as he regarded the island's bare and craggy peaks from his vista at sea. Acadia National Park is the nation's oldest National Park east of the Mississippi, and it celebrates its centennial birthday this year—it's a great time to jaunt north for an upstate adventure and toast to the park's enduring and timeless beauty. 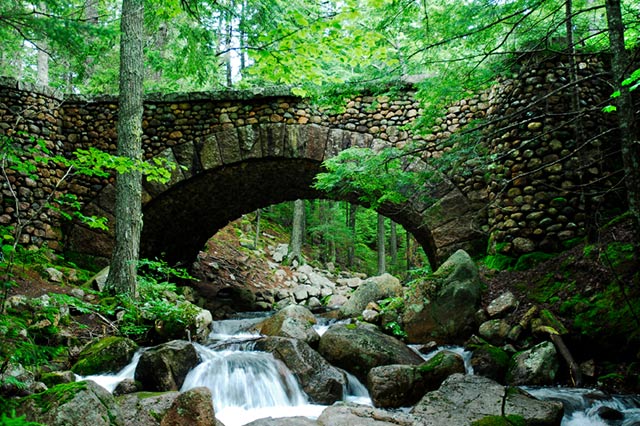 To say Acadia boasts something for everyone is the understatement of the century—it's a place that visitors return to, time and time again, always discovering something new along Maine's rocky coast. The park is a hiker's dream, with over 120 miles of trails that draw intrepid adventures from across the globe. If you're up for a quick ascent and want to show off your skills while hopping between iron rungs and ladders, check out the Beehive Trail along the open cliffs above the park's popular Sand Beach. You've got less than a mile to scuttle up nearly vertical ascents, so watch your footing! Or for those looking for an all-day affair, test your limits on Cadillac Mountain, the park's tallest peak, and behold the panoramic island views as the choppy Atlantic curls around the evergreen-topped Porcupine Islands. (You can also drive up Cadillac, but come on, where's your sense of adventure?)

If you want to stay closer to the ground, try a casual walk or bike ride along the park's Carriage Roads, 57-miles worth of broken-stone pathways that wind through lush boreal and deciduous forests and loop beneath historic granite bridges, each with their own unique architectural flair. And of course, for the waterbirds out there, you can get your kayaking kicks on one of the park's several lakes—keep an eye out for the local blue herons! 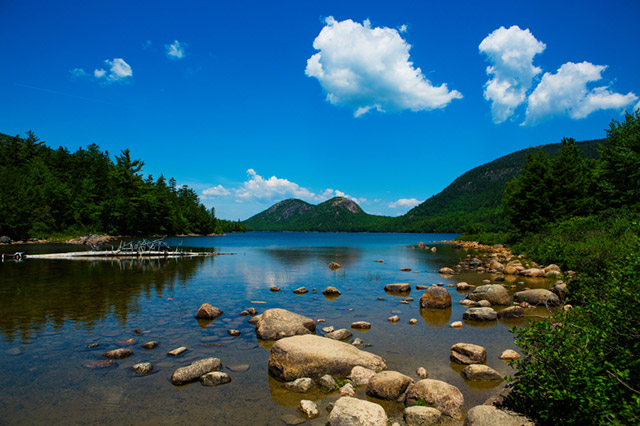 You're bound to get a little hungry on your adventures—so pack a picnic lunch or trot on over to the Jordan Pond House for a helping of their world-famous popovers. Pro tip: smear on the house-made strawberry jam and order extra—you won't be able to eat only one. Or, if you feel like straying from the pack in search of food, take a jaunt to MDI's quieter shorelines in Southwest Harbor and order up a few steamed lobsters from Beal's, all under the approving gaze of the local seagulls.

As Acadia's proud Maine neighbors, Poland Spring® Brand 100% Natural Spring Water celebrates all of its home state's natural beauties and delivers the fresh taste that those in the Northeast have cherished since 1845. So while you're out there conquering the wilderness, make sure to stay hydrated. To learn more about their commitment to sustainably sourced water and their Maine heritage, visit the Poland Spring website today.

This post is a sponsored collaboration between Poland Spring and Gothamist staff.