You Can Suggest A New Name For Hudson Yards' 'Vessel'

Less than a week since it opened, Hudson Yard's Vessel has drawn a lot of scrutiny over its Terms & Conditions, which included an overreaching rights grabs for your content. Those Terms & Conditions have now been changed for the better (though they're still troubling), but they'll probably need to be updated again sometime in the future to better reflect the fact that it likely won't be known as 'Vessel' forever.

A lot of people might not be aware of this, but the name 'Vessel' is just a working title for the honeycomb-like structure created by British architect Thomas Heatherwick. Despite the fact that all the language on the Hudson Yards website and all the promotional materials so far have referred to it as such, there is already a public naming competition quietly happening as we speak.

"Our hope is that after people visit Vessel, they will tell us their best idea about what to name the centerpiece," said Jessica Scaperotti, a spokesperson for developer Related Companies. "As you're leaving Vessel, there is signage by the exits where people can scan a QR code and give us their suggestions." She also added that they will be sending out emails to anyone who reserves tickets to visit Vessel to see if they want to suggest a name, though those emails haven't started going out yet.

Indeed, there are two signs by the exit (see photo below), each about as big as a piece of printer paper, directing people to participate. Except they choose to de-emphasize the naming callout by putting that part in the smallest font, and don't explain the QR code or how it even works. The signs read: "What's Next? We hope you enjoyed your visit to New York's newest landmark! Now, make your mark on Hudson Yards—tell us your best idea about what to name this unique neighborhood centerpiece." If you scan the QR code, it takes you to this website, where you can suggest a name if you put in your email address. 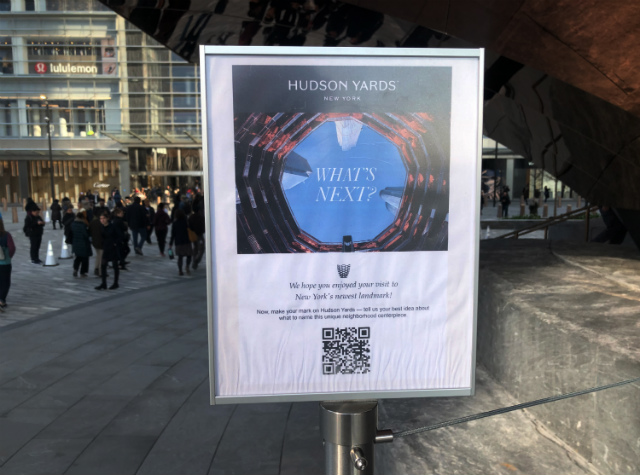 When we visited Vessel on Wednesday, just about everyone we spoke to knew it by the Vessel name, and no one had any idea it was changing names, or that they could participate in renaming it.

"Real question: what is this supposed to be? Modern art? I was really trying to figure it out, because it really looks like a rib cage," said Katlyn Westhoven, who was visiting the city from Albany. Anthony from Brooklyn suggested it should be called The Hive (because of its resemblance to a bee hive) and said the sculpture was "ground-breaking, next level, forward-thinking, chrome." Jennifer from Manhattan offered up The Vase, while Kevin from Queens said his friends call it The Acorn, although he prefers its current name.

"I think the name is beautiful, I think it fits," he told Gothamist. "I dragged my friends here to see it because I've been hearing about it for months now. I love everything about it. The first time i saw it, I was on the High Line and I saw it from a distance when they were first building it, and it looked futuristic and different and exciting." 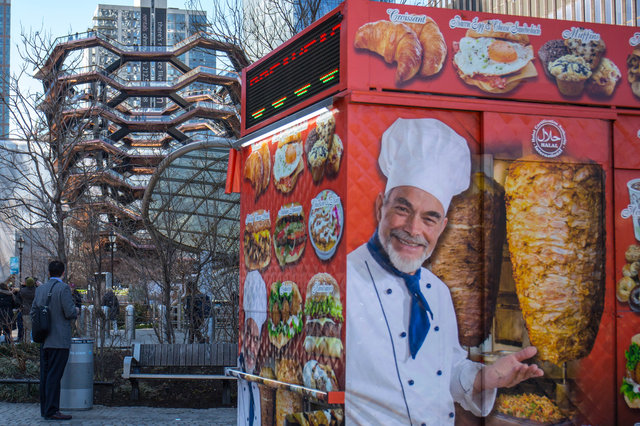 Scaperotti added that it's unclear how long the naming contest will go on, nor how exactly the final name will be chosen (will it be a public vote? does the architect get to decide?). "'NY Staircase' and 'Vessel' were always working names," she said. "But we felt the name would evolve after people experienced it. Because it's not just something you look at, it's something people experience."

In that spirit, we have a few name suggestions of our own to offer up. Feel free to submit one of these names as well:

#hudson yards
#name games
#the vessel
#vessel
#original
Do you know the scoop? Comment below or Send us a Tip