You Can Buy This 1930s Subway Car On eBay 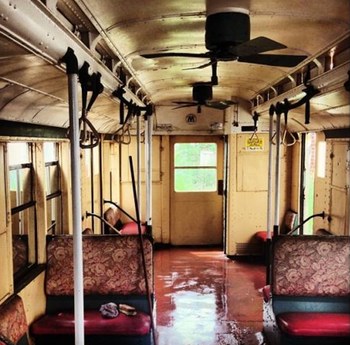 An original 1935 R6 subway train car is up for auction on eBay, with a starting bid of $24,000. Sal Pallante, the current owner, writes in his listing "This is a rare, once in a lifetime, opportunity to own a major piece of New York City history," noting the car was "built in 1935 by the American Car and Foundry Company under contract for the City of New York. This train was contracted for use on the IND line. In the mid 1960s it was moved to the BMT line, before finally being taken out of service in 1975." There were 500 of these R6s built, and Pallante says there are only 7 remaining. We reached out to the MTA but they would not comment on the accuracy of that claim.

One end of the train car, as you can see, has been cut open, and "the undercarriage had been stripped off in the late 1970s and the entire car now sits on a thin concrete slab." Many of the original details remain, however, "including the original seats (re-upholstered sometime in the 1980s), ceiling fans, and hand straps."

The car is being stored in a private yard in Canarsie, and serious bidders are welcome to have a look in person before bidding.

According to the Daily News, Pallante's distant relative first purchased the subway car from the MTA in the 1970s. It was used as seating inside Golden's Deli on Staten Island for 30 years, then Pallente says, "I was asked a favor to move it to my storage yard down in Bushwick." It remained there until he moved it to a new space in Canarsie.

While there are currently no bidders, we expect you'll be drinking overpriced craft cocktails out of this thing in Williamsburg any day now.

Until that day, the MTA's Adam Lisberg reminded us this morning: "you can see a wide range of lovingly restored antique subway cars at the Transit Museum, and we encourage everyone to visit."