You Can Bid On Items From 'The Americans' Comrade

It seems like only two weeks ago we were bidding a fond farewell to The Americans, everyone's favorite show about Russian spies posing as an all-American family in D.C. in the 1980s. While some have moved on to obsessing over whether Westworld will ever introduce a human character the audience will care about, some of us are still thinking about that devastating finale (ReneeTruthers, please DM me). We have some хорошие новости товарищи, because now you can always keep a piece of the show in your life by bidding on items from The Americans.

Almost 40 items from the show are available on eBay to bid on for the next five days via VIP Fan Auctions. You can go here for an overview of the items, but highlights include: the bugged clock from the second episode of the show; Elizabeth Jennings' sketch book; Philip Jennings' car stereo and license plates; a dead drop rock from the final season; Stan Beeman's FBI ; Elizabeth's "Jackie" disguise wallet and license; Philip's racquetball racquet and bag; Martha's spy pen (!); Elizabeth's "Dee Eckert" PanAm bag; and a few different outfits worn by characters on the show. 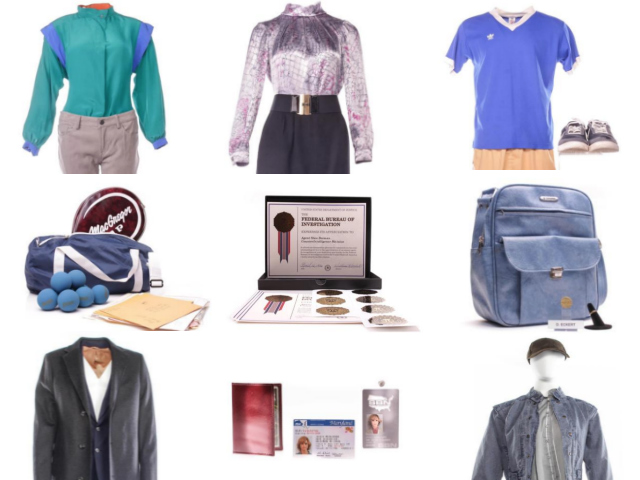 Some of the available items (via VIP Fan Auctions)

We may never know if Renee really truly was a spy or not (Editor's Note: WRONG, she definitely was a spy, please subscribe to my newsletter "THE TRUTH ABOUT RENEE IS OUT THERE" for more information), but you CAN own a sweater and skirt actress Laurie Holden wore on the show. Also, there are TWO sweaters worn by Elizabeth that are under $40 as of now, what is wrong with you people?! And if you're wondering why there are no wigs available, they apparently were all rentals, so just make your own DIY wig at home!

I said a few weeks ago that I'd buy the Clark wig at auction. That's not available (all the wigs were rentals), but Clark's suit is here. https://t.co/1ReONNHqlv

#auction
#fx
#spy stuff
#television
#the americans
#tv
Do you know the scoop? Comment below or Send us a Tip